Over the past few decades, we have gotten mysterious glimpses of alien worlds in faraway star systems.

By spotting the wobble of distant stars as an orbiting planet pulls at it, or seeing the star’s light dim as one passes in front of it, we have been able to identify over 5,000 exoplanets. But as of yet, we still don’t really know exactly what these worlds are like.

We know they’re there, but we can’t see them directly. Are they similar to the planets in our solar system? Are there any Earth-like exoplanets? Do they host life?

With our current technology, we can only theorize based on reflections from their atmospheres, orbits, and size.

But Stanford scientists have designed a telescope concept that could take stunningly clear images of these far-off worlds and reveal them for the first time. Welcome to the incredible world of gravity lens telescopes.

Even though exoplanets can be far closer — the nearest system to Earth, Proxima Centauri, has at least three exoplanets — they are also far smaller. Even if we used the highest resolution camera, the biggest telescope, and the longest exposure, we wouldn’t get a clear image, because our telescopes aren’t large enough to gather enough light to make out even the outline of an exoplanet.

So, how big of a telescope would you need? Well, to image an exoplanet 100 light-years away with clarity, you would need to scale up the Hubble so that its primary mirror has a diameter 20 times the size of the Earth!

Even our best future tech, such as liquid lens telescopes, could never reach this monstrous size.

But the Sun — well, that is plenty big enough.

A gravity lens: One of the earliest proofs of Einstein’s theory of general relativity was gravitational lensing. In general relativity, Einstein describes gravity not as a force but as a deformation in space-time caused by mass. This means that light still travels in a straight line through space-time, but the curvature of space-time bends its path around massive objects.

Around particularly massive objects, light bends in a phenomenon known as gravitational lensing. Light is bent around massive objects in a similar way as it is bent by a telescope lens or mirror.

This is why some of Hubble’s deep space images look like a fairground mirror: The mass of nearby galaxies causes gravitational lensing and distorts the light of the more distant galaxies behind them.

It was also why, during a solar eclipse in 1919, scientists saw stars near the Sun shift from their normal positions in the sky, as gravitational lensing bent their light around the Sun — thus confirming Einstein and general relativity.

Leveraging the Sun: Astronomers take advantage of gravitational lensing to see distant stars and galaxies, but what about seeing something a lot closer, and a lot smaller, like an exoplanet?

Back in 2020, a scientist by the name of Slava Turyshev proposed that we could use the gravitational lensing of our own Sun to create a giant telescope capable of imaging an exoplanet. He described how the concept could work, taking advantage of the Sun as a giant lens to pull in enormous amounts of light coming in behind it.

But there were still some serious problems to overcome, such as how do you undo all of the distortion caused by the gravitational lensing?

We could potentially use the gravitational lensing of our own sun to create a giant telescope capable of imaging an exoplanet.

Well, in 2022, Alexander Madurowicz and Bruce Macintosh figured it out. In a paper in The Astrophysical Journal, they proposed using something called “integral field spectroscopy” to spectrally and spatially resolve the image, using a complex algorithm to piece back together what an undistort image should look like.

In other words, theoretically, both the color and clarity of the image could be reconstructed to be nearly perfect.

The researchers then used images of the Earth from NASA’s DSCOVR satellite to try out this idea. DSCOVR is one of the furthest away Earth-observing satellites, sitting between Earth and the Sun.

Using a computer model, they distorted the image of the Earth as if it had been through gravitational lensing of the same magnitude as our Sun. Then Madurowicz and Macintosh used their algorithm to recover the image, proving that their system could recover useful images from a gravitational lens telescope.

The reconstructed image was still blurry, but it is the first iteration of the algorithm, so it hasn’t been optimized, and this image is from a satellite that was not designed for such a technique. If these were taken into account, such a picture could be a lot sharper.

Getting far out: So that’s it! All NASA needs to do is get a small optimized telescope out into space, and we can start taking pictures of exoplanets and hunting for aliens!

Well no. There is still a massive obstacle.

For such a telescope to work, it needs to be far from the Sun and capable of lining up the Sun and the exoplanet it wants to image. It sounds simple, but the scales here are mind-blowing!

To image an exoplanet 100 light-years away (there are thousands found within this distance, some potentially habitable), the telescope would need to be at 546 AU (Astronomical Units) from the Sun.

For some perspective: the Earth is at 1 AU and Pluto is at 39.5 AU. Voyager 1, the furthest man-made satellite, which has been traveling at breakneck speeds for over 44 years, is only at 156 AU.

Long-term thinking: So getting this telescope into position will be a monstrous challenge and a very long-term project. (It will also have to operate mostly autonomously, because the speed of light means that a signal from Earth will take over 63 hours to get there.)

Yet all is not lost: future technologies could solve this issue, such as solar sails, laser-guided sails, fusion thrusters, next-gen ion thrusters, and even a prototype fusion reactor (though, maybe don’t get your hopes up for that one).

But this is why Madurowicz predicts that it will be at least 50 years before such a telescope could be feasibly built.

But it will be worth the wait. We will finally be able to peer at distant worlds, and even their moons, in unprecedented detail. Not only could we stumble across signs of alien life, but we could also gain a far more profound knowledge of what makes a planet habitable and how star systems evolve, which will help us figure out our place in this expansive universe. 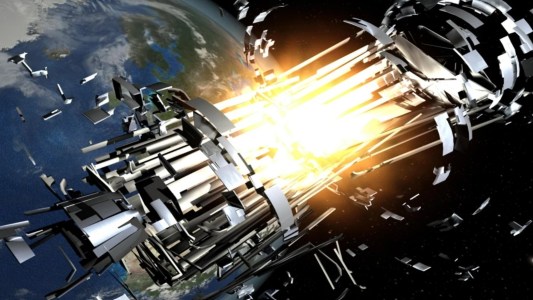 The sheer amount of stuff already floating in space makes the domino effect of explosions a likely possibility.

Aerospace
How the Kessler Syndrome can end all space exploration and destroy modern life
Subscribe to Freethink for more great stories
Subscription Center
Challenges
Video
Freethink
Subscribe
We focus on solutions: the smartest people, the biggest ideas, and the most ground breaking technology shaping our future.
Subscribe