Scientists may have recorded the resonating sounds of the Big Bang — the “hum” of the universe — for the first time.

Since there is no air in space, the “hum” isn’t actually from sound waves. It is a different type of wave, called gravitational waves, caused by massive stellar collisions, like when black holes crash into each other. These collisions create ripples in spacetime.

These faint gravitational waves are difficult to find — especially those from the aftermath of the Big Bang, over 13 billion years ago. But collectively, they are thought to make the universe hum — and scientists think they just found a trace of it.

A team at the North American Nanohertz Observatory for Gravitational Waves (NANOGrav) found a low-frequency signal while looking through radio telescope data collected over 13 years. They reported their findings in The Astrophysical Journal Letters.

“It is incredibly exciting to see such a strong signal emerge from the data,” said Joseph Simon of the NANOGrav collaboration.

“However, because the gravitational-wave signal we are searching for spans the entire duration of our observations, we need to carefully understand our noise. This leaves us in a very interesting place, where we can strongly rule out some known noise sources, but we cannot yet say whether the signal is indeed from gravitational waves. For that, we will need more data.”

Already, they have ruled out noise from data collection errors or interference from the matter in our solar system.

Like colliding black holes or stellar collisions, the gravitational waves caused by the movements of gigantic objects warp space-time. Currently, the only way to detect gravitational waves is by measuring the effects of those ripples as they pass us. Scientists look for hints of movement, like objects changing position or even the Earth itself shifting slightly.

It is incredibly exciting to see such a strong signal emerge from the data.

The most useful place to detect variations in signals is by looking at pulsars — dead stars that are like rapidly spinning space lighthouses. Pulsars flash radio waves with precision timing as they rotate. The team homed in on 47 reliable pulsars, all sending consistent signals, hundreds of times a second. A single interrupted signal might not indicate much, but a whole lot of pulsars displaying the same disrupted patterns could be evidence of a gravitational wave in the background.

Swinburne University of Technology astrophysicist Ryan Shannon, who isn’t involved with this research told ScienceAlert that this is a first step, but people should proceed with caution.

“I would caution the public and scientists to not overinterpret the results. Over the next year or two I think evidence will emerge as to the nature of the signal,” he said.

They haven’t yet confirmed it, but if the signal is gravitational waves, the researchers believe it could be a goldmine for essential clues to the most prominent mysteries of the universe — like helping us understand the behavior of black holes. But they say they need to study more pulsars for more extended periods and pool data sets from other similar studies.

“Trying to detect gravitational waves with a pulsar timing array requires patience. We’re currently analyzing over a dozen years of data, but a definitive detection will likely take a couple more. It’s great that these new results are exactly what we would expect to see as we creep closer to a detection,” said Scott Ransom, Chair of NANOGrav. 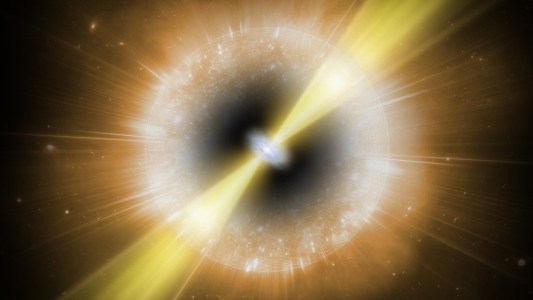