The US Space Force has come out in support of two Harvard astronomers who say a 2014 meteor is the first interstellar object spotted in our solar system — but NASA and other scientists aren’t yet convinced.

The background: After the object known as ‘Oumuamua — most likely a comet, not an alien spacecraft — was determined in 2017 to have originated from outside our solar system, Harvard scientists Amir Siraj and Avi Loeb decided to look through a NASA database for other potential interstellar visitors.

“No one had a reason to think that there could be meteors that were from outside of the solar system.”

Based on the meteor’s velocity and trajectory, Siraj and Loeb concluded that it must have come from somewhere outside our solar system. That would mean it — and not ‘Oumuamua — is the first known interstellar object in our sky.

“It was hiding in plain sight,” Siraj told Vice. “It wasn’t that we had to dig to find this database. It was more that there hadn’t been an interstellar object until 2017. As a result, no one had a reason to think that there could be meteors that were from outside of the solar system.”

The two wrote up their research and submitted the paper to the Astrophysical Journal Letters in 2019, but the journal declined to publish it because some of the data needed to confirm the meteor’s velocity was from classified military satellites and unviewable to reviewers.

The memo: On April 6, the US Space Command released a memo addressed to Thomas Zurbuchen, NASA’s associate administrator for science, with the subject line “Confirmation of Interstellar Object.”

The memo stated that Joel Mozer, the Space Force’s chief scientist, had reviewed data related to CNEOS 2014-01-08 and “confirmed that the velocity estimate reported to NASA is sufficiently accurate to indicate an interstellar trajectory.”

Now what? The memo, which released no new data, hasn’t been enough to get the astronomy community on the same page regarding the meteor’s origin.

“Although it is of high velocity, a velocity that could be potentially interstellar, it is next to impossible to confirm that it’s interstellar without accompanying data — from a longer data span or data from other sources, which doesn’t exist in this case,” he continued.

“The possibility of getting the first piece of interstellar material is exciting enough to check this very thoroughly.”

“Five seconds is plenty of time,” Loeb said. “It’s not the duration that matters — it’s the quality of the data that was assembled that matters. During five seconds you can do a lot, in terms of instrumentation and measurement.”

Looking ahead: The Harvard astronomers plan to resubmit their paper on the meteor to the journal that rejected it. Siraj told Vice that he’s also looking into searching the ocean floor near Papua New Guinea for fragments of the (potentially) interstellar object.

“It would be a big undertaking,” he said, “but we’re going to look at it in extreme depth because the possibility of getting the first piece of interstellar material is exciting enough to check this very thoroughly and talk to all the world experts on ocean expeditions to recover meteorites.” 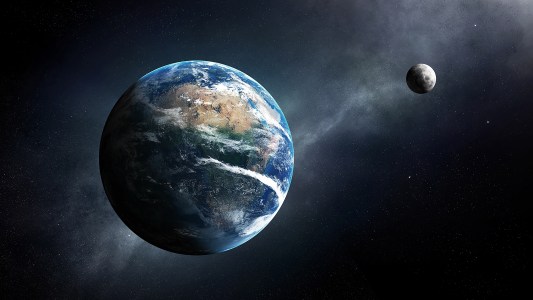 A new study suggests we use the orbit of the Moon to find gravitational waves we can’t currently detect in other ways.

Astronomy
Gravitational waves could be “pushing” the Moon
By Elizabeth Fernandez
Subscribe to Freethink for more great stories
Subscription Center
Sections
Video
Freethink
Subscribe
We focus on solutions: the smartest people, the biggest ideas, and the most ground breaking technology shaping our future.
Subscribe