Students are about to send a tiny satellite — the size of a loaf of bread — to space.

The nanosatellite will be a test run for a propulsion method that will use Earth’s magnetic field to generate thrust and allow small satellites to maintain low earth orbit.

Staying in Orbit Is a Challenge

About 60% of satellites are in low earth orbit. They typically use thrusters to boost themselves higher, so they don’t fall off course or back to Earth. But currently, this isn’t an option for CubeSats. These nanosatellites are so small they can’t efficiently carry fuel, thrusters, or propellant.

There is enough drag in the thin upper atmosphere to slow the tiny satellites down. Eventually, they will drop toward Earth and begin to break apart. If they haven’t decayed yet, they will burn up upon reentry — just months or even days after they first reached their orbit.

“These smaller spacecraft just don’t last very long, maybe even days to weeks, or a few months, dependent upon how high they are,” said Brian Gilchrist, a professor of electrical engineering and computer science at the University of Michigan.

But a satellite designed and built by 250 University of Michigan students (primarily undergraduates) could maintain low earth orbit without fuel. The team plans to explore the feasibility of their new propulsion system this weekend, on a tag-a-long mission to space with Virgin Orbit.

Once in space, the students plan to keep the tiny satellite, named MiTEE-1 (Miniature Tether Electrodynamics Experiment-1), in low earth orbit without thrusters of propellant. Instead, it uses the Earth’s electromagnetism to provide propulsion.

Solar panels affixed to two CubeSats generate electricity, which passes through a connecting wire. As the CubeSat orbits Earth, the ionosphere completes the circuit. When a wire conducts electrical current in a magnetic field, it exerts a force on the wire — boosting the CubeSat higher into orbit.

It will only generate a small amount of force, but the team hopes it will be enough to compensate for the atmosphere’s drag and keep the small satellite orbiting.

If successful, these tiny, low-cost satellites could stay in low earth orbit longer and accomplish important missions on a budget — like testing new technology, collecting data, monitoring storms or natural disasters. They could even operate in swarms.

The MiTEE-1 gives students first-hand experience in space exploration, but this is only the beginning. The first mission is designed to measure the amount of current that the satellite can draw from the ionosphere in various conditions, and calculate if it will be enough to maintain low earth orbit.

Next, they will build a second MiTEE satellite to demonstrate the electric propulsion system in operation. 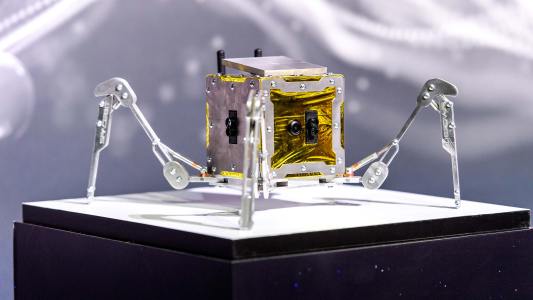 A spider-like moon rover heading to the lunar surface in 2021 is designed to explore the underground lava tubes in which astronauts might one day live.