Updated, 1/14/21, 10:50 EDT: This article was updated to correct the name of the Spacebit contact who spoke with Freethink and the timeline of future missions.

U.K. startup Spacebit is sending the first-ever “walking” moon rover to the lunar surface in 2021.

The rover, Asagumo, will be on a mission to explore parts of the moon that are currently inaccessible to wheeled rovers. Its findings could be the key to a permanent lunar base — and maybe even tracking down evidence of extraterrestrial life on the moon.

The Allure of Lava Tubes

Russia landed the first moon rover on the lunar surface in 1969, and since then, three others have followed in its tracks (two by the U.S. and one by China).

These rovers have provided researchers with incredibly valuable data, but because they’ve all moved around on wheels, they’ve only been able to explore relatively flat areas.

Researchers want to be able to explore the entire moon, though, and they’re particularly interested in studying any lava tubes beneath its surface.

Those tubes, formed after ancient volcanic eruptions, could provide insights into the moon’s history that we can’t gather from studying its surface and are a promising place to look for evidence of ancient lunar life.

They could also be the key to sustaining human life on the moon.

Astronauts could set up a base in one of the underground tubes, and that would offer them some protection from the space radiation, temperature fluctuations, and micrometeorites that could threaten their lives on the surface.

As enticing as lunar lava tubes are, though, researchers aren’t actually certain they exist. Visible holes in the lunar surface could lead to tubes… or they could just be holes.

It’s too dark to tell with telescopes, so the only way to find out for sure is to explore them directly — and that’s what Spacebit’s walking moon rover is designed to do.

Asagumo is solar-powered and tiny, weighing less than 3 pounds. It has a cube-shaped body and four spider-like legs with specially designed footers (squint and you might see a resemblance to Toy Story’s Babyface).

The robot’s legs and feet will allow the moon rover to crawl at different angles and adapt to different surfaces, Spacebit CEO and Founder Pavlo Tanasyuk told Freethink. The company can also adjust the robot’s gait to suit a specific environment.

“We can choose the optimal parameters for a particular area, manage the balance between speed, stability, and energy consumption,” she said.

Spacebit plans to send its first walking rover to the moon in July using a Peregrine lunar lander from the space robotics company Astrobotic.

The moon rover is designed to crawl at different angles and adapt to different surfaces.

Once it arrives, the robot will scuttle across the moon, taking measurements and recording video footage. It’ll send that data back to Peregrine for transmission to Earth.

After that comes the missions Asagumo was built for: exploring lava tubes.

Spacebit plans to send multiple Asagumo rovers to the moon with a wheeled “mothership” rover for the bots.

Those robots will explore its (potential) lava tubes, creating detailed 3D scans of the subterranean structures that could one day be home to the first lunar bases. 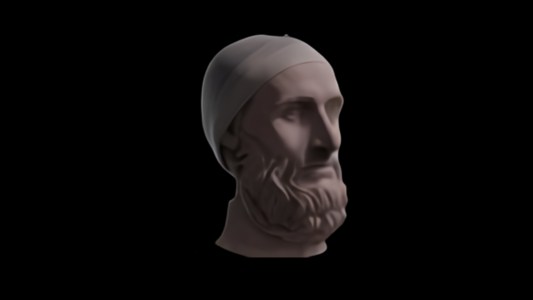