A lunar lander developed by Japanese aerospace firm ispace is now en route to the moon — kicking off a three-way race to be the first private company to successfully land a spacecraft on the lunar surface.

Why it matters: Only three nations have successfully landed spacecraft on the moon: the US, China, and Russia/the Soviet Union. Other countries have intentionally crashed spacecraft into the moon, but no private company has managed to do even that.

That’s because, for decades, the high cost of rocket launches meant that only those with really deep pockets — typically, governments or militaries — could afford to send anything into space.

The development of reusable rockets and other tech is bringing launch costs down, opening up new opportunities in space, and today, there are hundreds of aerospace startups all looking to secure their own place in the burgeoning space economy.

The mission: Japan’s ispace is one of those startups.

It hopes to become a leader in the development and deployment of lunar spacecraft, and it got a huge step closer to reaching that goal on December 11, when a SpaceX Falcon 9 rocket lifted off from Cape Canaveral with ispace’s first lunar lander, HAKUTO-R Mission 1, on board.

The lander will now spend about four months traveling a circuitous path to the moon, helped along by the gravity of the Earth and sun.

Once it reaches its destination, HAKUTO-R will orbit the moon for about two weeks before attempting a landing, likely around the end of April 2023 — if successful, that landing will make ispace the first private company to soft land on the moon and make Japan just the fourth nation to have homegrown tech reach the lunar surface intact.

After landing, HAKUTO-R will deploy two small rovers, one for the Japan Aerospace Exploration Agency and one for the United Arab Emirates (UAE) — the latter will be the first spacecraft from the UAE to reach the moon’s surface.

Looking ahead: ispace isn’t the only private aerospace company in the running to reach the moon soon.

Houston’s Intuitive Machines plans to launch its Nova-C lunar lander aboard a Falcon 9 in March 2023, and Pittsburgh’s Astrobotic Technologies’ lunar lander Peregrine is scheduled to lift off with United Launch Alliance’s Vulcan Centaur rocket during its inaugural flight in Q1 of 2023 (that rocket isn’t reusable, but ULA is touting its “greater affordability”).

Depending on the paths those landers take, either could reach the moon before HAKUTO-R, but ispace isn’t worried about being the first to arrive.

“We don’t care very much about who is going to land first,” CEO Takeshi Hakamada told New Scientist. “Our vision is to create an economically viable lunar ecosystem — I don’t think it’s possible to do that with only one company, so we want several companies to do business there.” 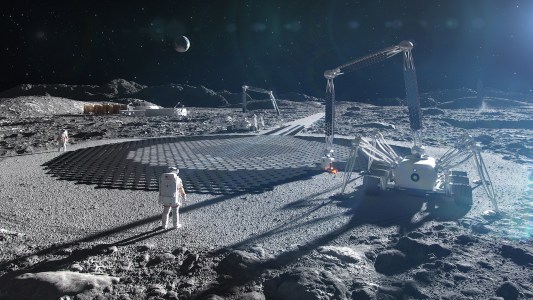 NASA has invested $57.2 into construction company ICON’s 3D printer for building on the moon, Mars, and beyond.