More than two decades ago, a group of scientists launched the Sloan Digital Sky Survey (SDSS), a project dedicated to mapping the night sky. Now, the group has unveiled the latest fruits of its labor: the largest three-dimensional map of the universe ever constructed.

This new map fills an 11-billion-year-long gap in scientists’ understanding of the universe’s history — a huge achievement — but the scientists behind it have already started looking ahead, planning out the creation of an even more impressive map in the future.

Making a Map of the Universe

You may have heard before that, when you look at the moon, you’re not seeing what it looks like in the present, but 1.3 seconds in the past — that’s how long it takes the light reflecting off it to travel the 236,000 miles to your eyes.

Based on that same principle, by imaging objects at ever-greater distances, we can peer into the universe’s past, seeing what it looked like at different points in its 13.8 billion-year history.

Prior to the release of this new map of the universe, astrophysicists had mapped objects at distances that show what the universe looked like over the past few billion years, as well as what it looked like 300,000 years after the Big Bang. (We can’t see further than that because the universe was so hot and dense back then that light could not pass through it.)

But the middle 11 billion years, however, remained a “troublesome gap,” according to Kyle Dawson, the principal investigator of eBOSS, the fourth and latest phase of the SDSS.

Since 2014, more than 100 astrophysicists involved in eBOSS have been working to fill this gap by studying galaxies and other celestial objects at these (mostly) previously unexplored distances.

This new map of the universe signals the culmination of their efforts.

Future of the SDSS

The same day eBOSS released the updated map of the universe, contributors to the project shared more than 20 new scientific papers analyzing different aspects of the data on the pre-print server arXiv.

Other scientists will undoubtedly take advantage of this new map to further their own research, too, leading to even more new insights into our universe.

The SDSS isn’t finished, either — with the fourth phase just wrapped, the project is already preparing for the fifth.

“We’re upgrading the hardware and instruments needed to keep the tremendous impact of SDSS going into the 2020s,” spokesperson Gail Zasowski said in a press release. “We’ll be focusing on the history of our own Milky Way Galaxy, the architecture of multi-star and planetary systems, how galaxies make their stars, and how black holes grow over the lifetime of the universe.”

“These are some of the most exciting questions in astrophysics, and we’re looking forward to the next decades of discovery!” she added. 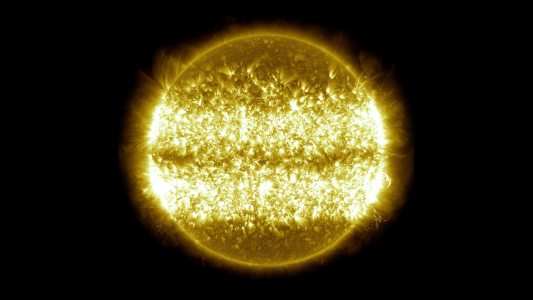 Astronomy
This 10-year time lapse of the solar cycle is breathtaking
By Kristin Houser
Subscribe to Freethink for more great stories
Subscription Center
Sections
Video
Freethink
Subscribe
We focus on solutions: the smartest people, the biggest ideas, and the most ground breaking technology shaping our future.
Subscribe