NASA’s Perseverance rover wasn’t alone when it landed on Mars on February 18 — attached to its belly was a four-pound helicopter named Ingenuity.

NASA spent years designing and testing this Mars helicopter in the hopes of using it to demonstrate the first controlled flight on another planet — a feat it’s expected to attempt within the next few months.

Here’s how this one-of-a-kind Mars helicopter and its mission could affect future plans to explore space.

When NASA started building its Mars helicopter in 2013, it knew that it was theoretically possible to fly on the Red Planet — but doing so wouldn’t be easy.

When a helicopter’s blades spin, they force air downward. Push enough air down, and the air pushes back, causing the helicopter to lift off. On Mars, the air is much thinner than it is on Earth. That means there’s less air to push down, which makes generating lift more difficult.

“To make (the helicopter) fly at that low atmospheric density, we had to scrutinize everything, make it as light as possible while being as strong and as powerful as it can possibly be,” Mimi Aung, project manager for the Mars helicopter, said in 2018.

The team did get a little help from Mars in the weight department: due to the Red Planet’s weaker gravity, Ingenuity weighs 62% less on Mars than it did on Earth.

After years of development and testing, NASA landed on a helicopter design featuring four-foot-long rotors that complete 2,400 revolutions per minute — but generating lift on Mars was just one of the challenges NASA faced.

Because Mars is so far away, it takes minutes for signals from Ingenuity to reach Earth and more time to send commands back. That delay meant NASA wouldn’t be able to directly control the Mars helicopter during its flights — they had to equip their helicopter with software that would allow it to fly autonomously.

“(W)e tell it the flight plan ahead of time, and it executes a trajectory that’s been pre-planned for it,” Tim Canham, Ingenuity’s operations lead, told IEEE Spectrum.

“As it’s flying, it’s autonomously trying to make sure it stays on that trajectory in the presence of wind gusts or other things that may happen in that environment,” he continued.

Now that Perseverance has landed with Ingenuity in tow, NASA will soon get a chance to see whether all its hard work on Earth pays off on Mars.

Ingenuity’s mission is expected to last 31 Earth days, and while the ultimate goal is a controlled flight, the Mars helicopter needs to meet several milestones before liftoff.

The first is already out of the way: survive the trip to Mars. A day after Perseverance landed on the Red Planet, NASA received a status report that Ingenuity and its base station were both operational.

Ingenuity will remain attached to Perseverance for the next 30 to 60 days, during which NASA will periodically charge its batteries to ensure they’re healthy.

After that, the Mars helicopter will need to successfully separate from the rover (Milestone 2) and prove it can keep itself warm during the frigid Martian nights (Milestone 3).

Milestone 4 will be Ingenuity charging itself via a solar panel, and the last milestone before flight will be the detached helicopter effectively communicating with Perseverance and NASA’s flight operators back on Earth.

If Ingenuity can do all of that, the next step will be firing up its rotors just fast enough to make sure they work (and not so fast that the Mars helicopter lifts off).

Then, NASA will attempt the first controlled flight, sending Ingenuity straight up into the air about three meters, letting it hover there, and then landing.

The Ingenuity team has done everything to test the helicopter on Earth.

If that’s a success, NASA could conduct up to four more flights during Ingenuity’s 31-day mission.

Those will all be at about the same altitude as the first flight (three meters), but NASA will move the helicopter horizontally, too, sending it 50 or so meters away from its launch point and back the first time, and then a little farther with each subsequent flight.

“(O)ur priority will be to get back engineering telemetry and not so much images, but I’m sure we’ll return a few, you know, because they always look cool.” Bob Balaram, chief engineer of the Mars helicopter, said of the flights.

That telemetry could play a pivotal role in NASA’s future plans for the Red Planet.

NASA could use the data from Ingenuity’s flights to design future Mars helicopters, ones that could complete surveys of the planet, flying over terrain too treacherous for rovers to handle.

These surveys could help identify areas of interest for future exploration by either robots or astronauts.

NASA could also design helicopters capable of carrying payloads. Those could potentially carry samples from one part of the Red Planet back to a base for study, or even ferry equipment from one Martian colony to another.

Ingenuity’s success could also lead to the development of aircraft for missions elsewhere in the solar system.

“If we can do it on Mars…we can probably do it in other places as well,” Dave Lavery, the program executive for Ingenuity, told Smithsonian Magazine.

But before any of that can happen, the Mars helicopter needs to make it through the next couple of months on the Red Planet and then do what it was designed to do: fly.

“The Ingenuity team has done everything to test the helicopter on Earth, and we are looking forward to flying our experiment in the real environment at Mars,” Aung said.

“We’ll be learning all along the way, and it will be the ultimate reward for our team to be able to add another dimension to the way we explore other worlds in the future.”

Astronomy
SpaceX wants to save Hubble. NASA may be on board.
NASA and SpaceX may use a Dragon spacecraft to boost the Hubble Space Telescope into a higher, life-saving orbit. 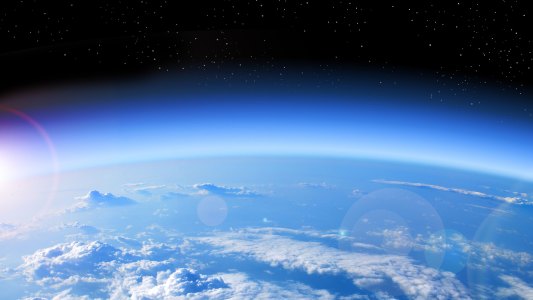 A new light-driven levitation technique can lift objects large enough to carry sensors to the understudied mesosphere near the edge of space.

Aerospace
Light-driven levitation could lift probes to the edge of space
Subscribe to Freethink for more great stories
Subscription Center
Challenges
Video
Freethink
Subscribe
We focus on solutions: the smartest people, the biggest ideas, and the most ground breaking technology shaping our future.
Subscribe