It is about to get crowded on the crimson planet. More than one Mars mission this summer is reigniting public interest in our neighbor.

The United Arab Emirates (UAE), China, and the United States have all launched — or will launch  — unmanned spacecraft to the planet this July. (Another European mission was pushed to 2022, thus being fashionably late.) These voyages are designed to  help us prepare for future human missions to Mars — which NASA aims to accomplish by the 2030s.

Why the crowded schedule? They’re all trying to avail themselves of the ideal launch window, a time, roughly every 26 months, when Earth and Mars are closest together. This fall, we’ll practically be kissing, at a mere 38.6 million miles apart; Mars apparently is not concerned about social distancing.

If they all make it safely, they should arrive at the planet  in February.

China’s Mars mission, dubbed Tianwen-1, lifted off from the Wenchang Space Launch Center on July 23 . Named after a poem by fourth-to-third century poet Qu Yuan, the mission’s most startling feature is its payload.

While the U.S. — the only country to have successfully landed on the planet aside from the Soviet Union, and the one with the most landings by far — ran a separate Mars mission for each stage in a progressively more intimate exploration, China is doing all of it at once.  Step one of the mission includes a flirtatious orbiter; next, first base with the lander; and finally, the rover, which, well, roves around.

The mission, if successful, will firmly establish China as a power in the New Space Race, instantly putting up all three phases of Martian machinery.

The orbiter will circle the planet for the Martian year (687 of our puny Earthling days), and serve as a relay for the rover, whose 90 day mission will use cameras and ground-penetrating radar to explore the blood ball.

A New Hope in the Arab World

al-Amal, Arabic for “hope,” took off first, launching from Tanegashima, an island off the coast of Japan, on July 19. Hope is an orbital probe, destined to circle around the red planet with the goal of being a true weather satellite, flying in a higher orbit than most so it can focus on the planet’s weather patterns. It also aims to lay the groundwork for a human settlement within the century.

But beyond science is the idea epitomized by its name. The mission marks the first interplanetary foray for the Arab world, a rocket-fueled return to the region’s proud history of intellectual advancement. During the Islamic Golden Age of the eighth century, the Arab world provided humanity with major advancements in mathematics, medicine, philosophy, art, and astronomy.

“We Arabs love to connect things to our heritage and the past, but Hope really means the future,” Nidhal Guessoum, an astrophysicist at the American University of Sharjah in the UAE, told National Geographic. “Hope means that we turn away from the conflicts and focus on human and economic development.”

More than just a symbol of pride, the Emirates Mars mission also aims to inspire a new investment and interest in STEM programs; an important step towards the Emirates’ economic diversification, as the various oil states begin to see the writing on the wall when it comes to the future of energy.

NASA: Last But Not Least

Last to the party is NASA’s Mars 2020, which will put the rover Perseverance on the planet. It’s expected to launch on July 30.

The US mission aims to study the habitability of the planet and to collect samples of the rocks and soil that can eventually be brought to Earth for further study, including a search for signs of ancient microbial life. Another goal is to test new technologies — most awesomely a Mars helicopter — that may be needed for future human survival on the planet.

Unfortunately, we won’t be getting the only true Mars mission I need in 2020. 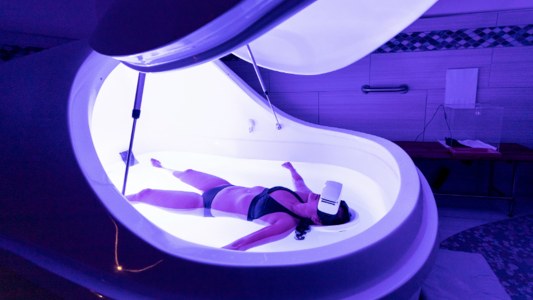 SpaceVR is trying to recreate the mind-altering “overview effect” experienced by astronauts using a float tank and VR headset.