Released from the constant tyranny of gravity, an astronaut’s body can actually suffer with the lack of resistance, which may lead to muscle and bone loss. However, new research suggests that blocking a particular protein which regulates muscle mass may slow or prevent this damage  — and the discovery was made by sending mice into space.

Sent into orbit by researchers — and husband and wife — Se-Jin Lee and Emily L. Germain-Lee, the mice could hold implications not only for space flight, but the plague of skeletomuscular issues caused by any number of diseases and age.

Lee, a professor at UConn Health and the Jackson Laboratory for Genomic Medicine (JAX), first co-discovered a protein that limits muscle growth (called myostatin)in the late 1990s at Johns Hopkins.

When myostatin is no longer present in an animal, the results are dramatic — like bulls with morrillos whose power and girth evokes the belly of a bomb and whippets with musculature the envy of any bodybuilder.

Lee bred mice specifically designed not to express myostatin — and those mice gained twice as much muscle mass as plain old, regular mice. “That immediately suggested the possibility that targeting this pathway might be beneficial for treating conditions in which muscle is lost,” Lee says.

A drug which worked as a myostatin inhibitor, preventing the protein from doing its job, could promote muscle growth which could — in addition to helping astronauts stay in space longer — help treat various health ailments.

With the threat of weakening bones and muscles (even cardiac muscles of the heart atrophy), astronauts can only spend a limited time in space. So longer missions — like, say, to Mars — could be out of reach for humans to safely travel there. The desire to solve this problem is how 40 mice found their way to the ISS.

After setting baseline measurements of their weight and body composition, the mice hitched a ride on a SpaceX Dragon to their temporary home this past December. Up in orbit were three types of mice: a control group of mice that were ‘normal’, a group of mice genetically engineered not to express myostatin, and a third group of mice that received the protein inhibitor.

After their 33 day stay, the mice splashed down in the Pacific. Back on Earth, their measurements were taken again and their experience analyzed. The results, published in PNAS, were promising.

The control mice lost muscle and bone mass as expected. The genetically altered mighty mice held tough, not making gains but not losing muscle either. But the mice with the myostatin inhibitor not only didn’t lose muscle mass and bone density, they gained it.

“These solutions will be part of a tool kit,” Albert Boquet, a professor at Embry-Riddle who studies human performance in extreme environments, says. Perhaps a myostatin inhibitor, combined with a rigorous exercise routine and a specialized diet, could be enough to get to Mars healthy and strong.

Emily Germaine-Lee, Lee’s wife and research partner,  has seen up close the devastating impact of muscle and bone disease. As the director of the Center for Rare Bone Disorders at Connecticut Children’s, she knows that a myostatin inhibitor’s greatest value may not lie in space, but instead closer to home, as treatments for patients with conditions like osteogenesis imperfecta — brittle bone disease.

“They can have a hundred fractures by the time they’re 10,” Germain-Lee says. “It’s terrible. It’s absolutely terrible.”

The first project the couple did together combined mice with brittle bone disease and Lee’s work on myostatin. With their myostatin inhibited, the fracture-prone mice were able to increase their bone and muscle mass. “What I saw every day, what I just felt like I had to … just do everything I could to help to find a treatment.”

One day, a myostatin inhibitor could perhaps reverse or mitigate the muscle and bone depletion caused by skeletal muscle and bone disease, which atrophy from having mobility impaired, even the loss accrued with age — consider the hip fracture which is so often the first thread of fate to snap, or the loss of mobility that can lead to blood clots.

“It just pervades everything,” Germain-Lee says.

“And there’s not a person living on Earth who doesn’t have a relative that has succumbed because of something related to atrophied muscles and bone degeneration.” 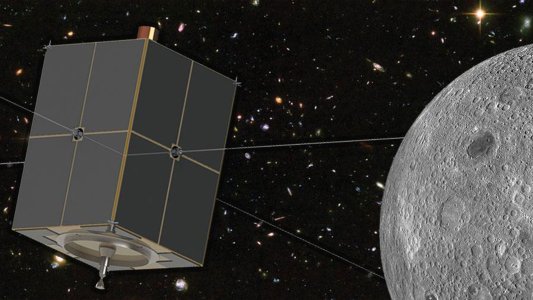 To make a journey to the moon faster, the NASA scientists behind an upcoming moon mission designed a brand new route for their spacecraft to take.