Stars, although they’re incredibly stable over very long timescales, simply cannot live forever. No matter what their composition, mass, temperature, or other properties may be, every star will eventually run out of the nuclear fuel that powers it. For all but the most massive stars in the Universe, each one will leave behind a remnant core: a white dwarf. Most Sun-like stars will leave behind white dwarfs that are mostly made of carbon-and-oxygen, with some helium, neon, magnesium, and silicon alongside them, and these remnants will continue shining brightly for trillions of years to come.

But unlike the Sun, which is all by itself in the Solar System, approximately half of all stars have at least one companion, and are members of multi-star systems. As time goes by, all stars burn through their fuel, but the most massive stars burn though their fuel the fastest. As a result, they end their lives and become dense remnants first, allowing them to begin stealing mass from their remaining companions.

When a white dwarf steals enough mass, they go nova. But these nova aren’t what we originally thought they were, and the discovery of the fastest nova ever, V1674 Hercules, teaches us more than we could’ve imagined just a few short years ago. A catastrophe is soon coming for this stellar remnant. Here’s what we know about it.

Once a star runs out of the last of its fuel in its core, its days as a full-fledged star are over. While the most massive stars will have their cores collapse in a catastrophic supernova explosion, most stars will blow off their outer layers gently, leaving the remnant core to contract down, trapping the star’s heat inside, and transitioning into a white dwarf star.

There’s a limit to how massive a white dwarf can be: about 1.4 times the mass of our Sun. Below that mass threshold, electrons and atomic nuclei in the white dwarf’s core will experience a quantum mechanical pressure from the Pauli Exclusion Principle that holds them up against gravitational collapse. But if the mass ever rises above that threshold, the white dwarf’s core will collapse, creating a runaway nuclear reaction and destroying it entirely in a type Ia supernova explosion.

Perhaps paradoxically, the more massive a white dwarf is, the smaller, denser, and hotter it will be. The more massive it is, the closer it is to that critical threshold, where it will experience a catastrophic cataclysm and self-destruct. But, unless it’s going to collide with another white dwarf, its journey toward this destruction is slow and gradual, driven by the accretion of material from a companion star.

This is where, originally, the idea of a nova came from. A nova is a burst of brightness that greatly enhances a white dwarf’s luminosity, and then gradually falls back down to its original brightness over time. It’s known to be caused by the accumulation of matter from a companion star onto a white dwarf, and when enough mass accumulates to trigger a thermonuclear reaction, a nova is the result.

Although the relatively more spectacular phenomena of either a supernova or a kilonova are often all the rage, the nova has one fundamental advantage: it doesn’t destroy either of the progenitor objects that give rise to it. Instead, a nova simply represents an outburst of activity and a release of energy, symbolic of bringing a white dwarf closer and closer to the critical threshold where it can no longer hold itself up against gravitational collapse.

Over long enough timescales, just as you’d expect, these novae can recharge. As long as you’re continuously accreting matter from a companion star, each “flare” of a nova — even though it might take centuries or millennia for them to typically recur — so long as neither the white dwarf nor the companion star get disrupted, will be both preceded and followed by another one.

Originally, astronomers had a simple, naive, and incorrect picture of how these nova events occurred.

Some of the novae that are out there have tight, close-orbiting binary companions, and those are the novae that recharge and go off again the fastest: the recurrent novae. While most novae are expected to take somewhere on the order of millennia to recharge, some take mere centuries or even just decades to recharge. The fastest repeated novae ever observed can experience just 8 or 9 years between recurrences.

But this picture that astronomers initially painted for themselves, above, is not quite correct, and there are two clues that brought us there.

We can then look at the other properties of each nova in the context of the nova’s speed and the white dwarf’s mass.

What we’ve found is that the fastest novae — i.e., the ones whose light falls off from its peak brightness the fastest — correspond to white dwarfs that are all extremely close to the maximum possible theoretical mass a white dwarf can have. The most massive white dwarfs whose masses have been determine through this method come in at about 1.37-1.38 solar masses: very close to that theoretical limit.

Many of these fast novae are, in fact, the white dwarfs associated with recurrent novae, such as RS Ophiuchi, and pretty much all of them have tight binary companions whose periods are measured in mere days.

But we also have the capability of measuring the light in many different wavelengths coming from these novae: the light from hydrogen; the X-ray light; the light that reveals the presence of specific elements, such as neon; and the abundance of the light elements and their isotopes that are very rare in the Universe overall, such as lithium-7. One of the great things about physics (and, by extension, astrophysics), is that every specific model you can imagine makes concrete predictions for what we should expect for each of these observables. The “shell” model of white dwarf accretion and novae, unfortunately, doesn’t agree with any of the things that we see.

In fact, we’ve just observed the fastest nova ever recorded: V1674 Hercules, which occurred between a white dwarf and a very tightly-orbiting star located 15,000 light-years away from us. The light from the nova declined extraordinarily quickly: falling by +2 astronomical magnitudes (about a factor of 6) after just 2 days, and falling by a total of +3 astronomical magnitudes (a factor of ~16) in only 3 days. Its binary companion completes an orbit in just 3.67 days: 24 times faster than Mercury orbits the Sun.

The combination of these observations doesn’t agree with the initial, naive model of novae, but it agrees spectacularly with a model developed back in the 1970s and 1980s: the TNR model, also known thermonuclear runaway theory.

For less massive white dwarfs, you have to build up more and more material before such a fusion reaction can occur. Then, when that reaction does occur, because there’s so much material that can be fused, you get the ejection of a lot of mass, and the luminous outburst declines only very slowly.

On the other hand, if your white dwarf is more massive, you only accrete a small amount of gas before the nuclear reaction is triggered. The small size of the white dwarf leads to high peak temperatures, allowing for the fusion of heavier elements, high ejection speeds, and high-energy photons moving into the ultraviolet and the X-ray. Any obscuring, neutral matter gets ionized rapidly under these conditions, allowing us to see deeper into the outflowing gas very quickly.

All of these predicted signatures of the thermonuclear runaway model were calculated, from a theoretical perspective back in the 1970s and 1980s. Although a few of them — like the presence of enriched light elements — were confirmed within only a few years of when they were made, most of this theory’s predictions were only observationally confirmed in the 2010s and, more recently, in the 2020s.

This model leads to one more spectacular prediction that’s never yet been confirmed: as white dwarfs get closer and closer to that ultimate mass limit, and to an eventual type Ia supernova, we expect the time between subsequent recurrent novae will get shorter, and the decline from peak brightness of each nova will get faster and faster. This gives us the triple expectations that:

If nature is kind to us, all three of these predictions could soon be borne out.

Yes, of course it’s fantastic whenever we break a cosmic record. Finding the fastest nova ever — one that declines from its peak brightness faster than any other ever has — is exciting, but it’s simply representative of incremental progress in this field. One of the cutting-edge fields of astronomy is known as time-domain astronomy, which studies how objects in the Universe vary in properties (like brightness) over time. The faster we can survey large areas of the sky, and monitor how the objects within those areas change over time, the better we can get at finding and identifying objects that burst, flare, or even undergo runaway thermonuclear reactions on shorter and shorter timescales.

As long as white dwarfs keep accreting matter from a companion star, their march toward the maximum stable mass they can attain, the Chandrasekhar mass limit, is inevitable. The closer they get, the faster their novae will be, and the shorter the recurrence time will be between subsequent novae. If we’re smart, we’ll keep an eye on the fastest novae ever found to not only monitor when and how they recur, but to monitor them as potential supernova candidates. If nature is kind to us, we might soon witness the cataclysmic, supernova-producing death of a white dwarf remnant within our own Milky Way. With V1674 Hercules setting the new record for fastest nova ever recorded, we now have a new idea of where might be the smartest place of all to look.

Astronomy
Continents may be the key to whether exoplanets can harbor life
New simulations of continent distribution could help astronomers assess whether newly-discovered exoplanets may be habitable. 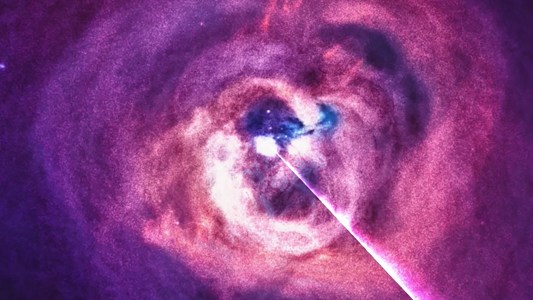 NASA scientists have “remixed” the incredibly deep sounds emitted by a black hole 240 million light-years away.

Astronomy
Listen to the sound of a black hole, remixed by NASA
Subscribe to Freethink for more great stories
Subscription Center
Challenges
Video
Freethink
Subscribe
We focus on solutions: the smartest people, the biggest ideas, and the most ground breaking technology shaping our future.
Subscribe