For an exploration-obsessed teenager, he seemed to be born at the wrong time: his generation existed in a world mostly filled in, too late to explore the earth, too early to explore the stars. In this era of cruelly well-defined limits, dreams of people on the moon seemed a touch too distant, and his love for space a bit too out of step in Denmark.

Eventually, Sebastian Aristotelis’ passion for exploration was reignited by space-oriented thinkers, like Robert Zubrin (author of The Case for Mars: The Plan to Settle the Red Planet and Why We Must) and Elon Musk.

When he and fellow architecture student Karl-Johan Sørensen found themselves in a rain-soaked Copenhagen coffee shop in 2017 with a few hours to kill, they discovered that they both had dreams of space.

Combining their passions for space and skills in architecture, they carved out a job fit for a futuristic romcom: space architect. Their studio, Saga Space Architects, has since gone on to design projects like a simulated Mars lab in the cinnamon-colored climes of Israel’s Negev desert.

But with new missions going to the moon again, they’ve turned their sights to something a bit closer to home.

Building a Place for People on the Moon

LUNARK is a prototype habitat for people on the moon. It looks something like a curtseying phage virus, all angled panels and legs. With a full-scale mock-up completed, they are beginning to fabricate the prototype.

The egg-like habitat is expandable — inspired by origami — and designed not only to meet the physical challenges of living on the moon, but the psychological as well. And they want to put it to the test in one of the harshest places on Earth: the brutally cold northern reaches of Greenland.

The first challenge in going to the moon is getting something to the moon (and, likewise for terrestrial prototypes, to remote latitudes of Greenland).

“You’re limited by the size of the rocket,” Aristotelis says (or shipping container). “Even the largest rocket is quite small.”

Their solution is the expandable design. Able to be compressed to fit into tight cargo spaces, the LUNARK then expands. The moon version will be bigger than the Greenland prototype, Aristotelis says. With considerably less gravity, people on the moon can take advantage of living in the extra vertical space. And the folding panels will also contain a solar array to power the LUNARK’s systems.

LUNARK is designed to be a research station, for people on the moon staying for relatively short time periods. Living on the moon for an extended period of time will require further development to better protect against radiation, Aristotelis says. His favorite idea is to cover the habitat with lunar regolith — abundant, insulating, and radiation shielding. Best of all, it’s already up there!

As important as the foldable design is LUNARK’s system for helping people on the moon adjust psychologically, Aristotelis says. Living on the moon can dramatically alter the body’s circadian rhythms — NASA’s proposed landing site, the moon’s South Pole, has regions that receive over 200 days of constant sun. That’s great for solar power, but with a static environment outside, it becomes difficult to keep track of time or ward off depression. (Just think about how you feel right now, mid-pandemic.)

“Now, when we talk about isolation, people really understand it,” Aristotelis says. We’re in our houses for a few months and are already getting stir crazy; in a moon colony, something similar would be the norm. (And there are, as yet, no lunar grocery stores or parks to break up the monotony, either.)

“What we realized is, all you need is variation,” Aristotelis says. The plan is for LUNARK to utilize a dynamic circadian light system — a bank of LED lights to simulate the motions of the sun and even the day-to-day variations from overcast or rainy days to bright, sunny ones.

Eventually, Aristotelis hopes to add other variables as well, like temperature or even the tangible feedback of “rain” on the LUNARK’s surface. The idea is to make living on the moon feel like living on Earth — at least until you look out the window.

More variation can come from using various textures — getting away from that sterile, Stanley Kubrick scifi look — and incorporating plants and algae, which can provide life, food, and help scrub carbon dioxide.

With fabrication beginning, the next step is to take the LUNARK to Greenland.

The Kickstarter-funded expedition is planned to last from this September to November. That time frame will give them a couple months of constant sun, Aristotelis says, simulating the atmosphere-less sky above a South Pole moon colony. Then with the arrival of winter, they will be plunged into darkness.

Aristotelis and Sørensen will live in the LUNARK themselves. People on the moon will face challenges incomparable to any on Earth, so the element of danger is part and parcel of the experiment.

“You really need to simulate all the different stressors that you’d experience,” Aristotelis says. Isolation is the norm, fresh air is non-existent; the very rules of physics you’re used to are out the pressurized window.

“Everything wants to kill you,” Aristotelis says.

The brutal cold, howling winds, and creamy nothingness of Greenland will stand in for the brutal lunar surface. And just like people on the moon, they will require a special suit for exploring the outside. The looming threat of polar bears replaces the chance of getting hit by a meteorite, and they do not need to fake being isolated — the only people remotely nearby are Danish military bases, making a helicopter evacuation a possibility if things go wrong.

Danes have a long, storied history of venturing into the unknown cold, explorers of the past pushing off from their shores and sliding through a hostile environment not designed for humanity.

Saga Space Architects name comes from this past, Aristotelis says.

“(In) the old Norse language, a story about exploration is called a saga.” 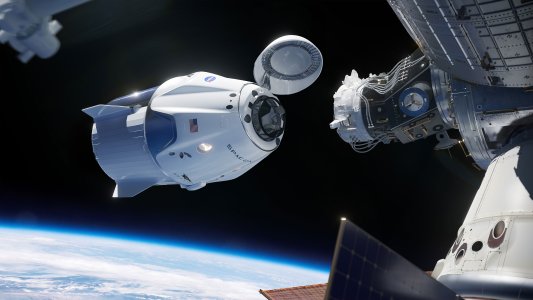 On May 31, a SpaceX Crew Dragon with two astronauts onboard docked with the International Space Station, marking a milestone in spaceflight.

Aerospace
Tracking the Crew Dragon: Docking with the ISS
By Kristin Houser
Subscribe to Freethink for more great stories
Subscription Center
Sections
Video
Freethink
Subscribe
We focus on solutions: the smartest people, the biggest ideas, and the most ground breaking technology shaping our future.
Subscribe