Fewer than 600 people have ever visited space — you could fit them all in a small concert hall and have seats to spare.

Most members of this exclusive club are professional astronauts. All had to meet strict health requirements to secure their spot on a spacecraft — and those requirements have put space out of reach for many people with physical disabilities.

That’s changing, though, thanks to the growth of the private spaceflight industry, through which non-astronauts can buy tickets into space.

Now, one wannabe space tourist has booked a flight for four aboard a SpaceX rocket — and he’s taking a childhood cancer survivor, with artificial bones in her leg, along for the ride.

When Hayley Arceneaux was 10 years old, she was treated for cancer at St. Jude Children’s Research Hospital. While there, doctors replaced one of her knees and part of her thigh bone with a titanium prosthesis, which left her with a limp.

Arceneaux beat her cancer, and left St. Jude’s with a desire to one day return as a staff member. Nearly two decades later, she accepted her “dream job” as a physician assistant at the hospital.

A year before she was diagnosed with cancer, though, Arceneaux had a different dream job, this one inspired by a family vacation to NASA’s space complex in Houston, Texas.

“I got to see where the astronauts trained and, of course, wanted to be an astronaut after that — who doesn’t?” she told St. Jude’s.

After her bout with cancer, Arceneaux didn’t think she’d be able to reach space due to the strict physical requirements — but she’s now slated to lift off as part of a new private spaceflight mission: Inspiration4.

Billionaire entrepreneur Jared Isaacman, founder of the payment processor Shift4 Payments, has booked a four-person private spaceflight aboard a SpaceX Crew Dragon to make his own childhood dream of visiting space a reality.

He’s calling the mission Inspiration4, and each of its crew members will represent one of four pillars: Leadership, Hope, Generosity, and Prosperity.

Isaacman is filling the Leadership role, serving as the crew’s commander. Hayley Arceneaux was chosen to represent Hope.

“I hope to show young people, those affected by cancer, and people with disabilities to look toward the future,” she told Freethink.

“Going through cancer, my future felt very uncertain, and it was often difficult to look beyond each day,” she continued. “I hope this mission encourages dreaming big and never giving up in the process.”

Isaacman plans to give the Prosperity seat to one lucky, inspiring entrepreneur who launches a new store on his ecommerce platform, Shift4Shop.

To be considered for that Inspiration4 seat, the entrepreneur must record a video about their business and share it on Twitter. A panel of celebrity judges will then choose the winner in mid-March.

The Generosity seat will go to the winner of a raffle raising money for St. Jude’s. Isaacman has already donated $100 million to the hospital and hopes to raise another $100 million through the raffle.

No one can buy more than 10,000 entries — this limit was designed to prevent a wealthy person from buying millions of entries and all but ensuring they’d win a seat aboard the private spaceflight, Isaacman told the New York Times.

The raffle winner will be drawn on March 1.

Getting Ready for Launch

Once all four seats are filled, the space tourists will undergo commercial astronaut training with SpaceX — they’ll learn how to operate in microgravity, how to get into and out of a spacesuit, and what to do in case of emergency.

Arceneaux told Freethink the part of astronaut training she’s most looking forward to won’t take place at SpaceX’s facility, though — she can’t wait to ride with Isaacman in the Russian fighter jets that he owns and flies for fun.

“We will be exposed to many G forces, probably more than we’ll even experience with launch and reentry,” she said. “I’ve never experienced anything like it before.”

The plan is for the private spaceflight to launch in the fourth quarter of 2021 from NASA’s Kennedy Space Center.

A SpaceX Falcon9 rocket will propel the Crew Dragon capsule carrying all four passengers into space, where it will orbit the Earth once every 90 minutes for a few days.

SpaceX will monitor the mission from the ground, and on reentry, the capsule will splash down in the water off the coast of Florida.

At that point, Arceneaux will become the first person with a prosthesis and, at 29 years old, the youngest American to visit space — unless, of course, the Prosperity or Generosity seats go to someone even younger. 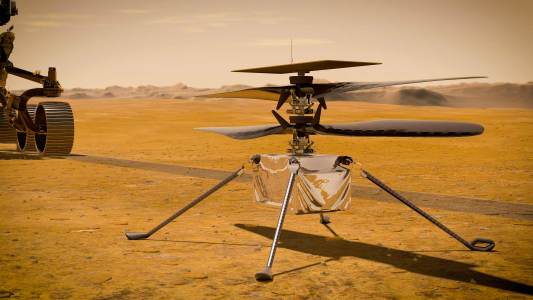 NASA’s Mars helicopter Ingenuity has survived the journey to the Red Planet. Here’s what’s next for the first-of-its-kind aircraft.