Radiation in space is a major threat to astronauts’ health — without Earth’s atmosphere and magnetic field to protect them, they’re exposed to levels of radiation that could increase their risk of cancer and other diseases for the rest of their lives.

“One day in space is equivalent to the radiation received on Earth for a whole year,” Marco Durante, a physicist working with the European Space Agency (ESA), explained. “As it stands today, we can’t go to Mars due to radiation. It would be impossible to meet acceptable dose limits.”

Now, researchers have developed a new biomaterial made from the skin pigment melanin that could protect astronauts from some of this harmful radiation in space — potentially bringing plans for human missions to Mars one small step closer.

Melanin is incredibly common — it can be found in plants, animals, bacteria, and fungi — and while often associated with pigmentation, it also provides protection against radiation.

One of the five types of melanin found in nature, pheomelanin, is known to be particularly efficient at absorbing x-rays, which are one of the types of radiation in space threatening astronauts.

Armed with that knowledge, researchers from Northwestern University set out to synthesize a form of pheomelanin that’s even better at warding off x-ray.

The researchers started with pheomelanin sourced from red rooster feathers. After extracting the sulfur naturally found in the pigment, they enriched it with selenium — a mineral previously linked to cancer prevention and radiation protection.

Next, they treated living cells with the new biomaterial, dubbed “selenomelanin,” and exposed them to levels of x-rays that would kill humans. For comparison, they did the same with untreated cells, as well as cells treated with either pheomelanin or another type of melanin (eumelanin).

All of the cells died except those treated with selenomelanin, which continued to exhibit a normal life cycle.

This study, published in the Journal of the American Chemical Society, is just the first step along the path to something that could protect astronauts from radiation in space.

The researchers will now need to prove that selenomelanin is safe to slather on human skin and that it can protect against x-rays outside Earth’s atmosphere.

Even if it can, though, selenomelanin won’t solve the problem of space radiation entirely — after all, x-rays are just one of the types astronauts have to contend with.

Only the cells treated with selenomelanin survived the radiation dosing.

However, the fact that it is lightweight — unlike, say, the lead apron that protects your body from radiation when a dentist x-rays your teeth — could bode well for its potential use in space exploration, where every extra ounce of weight matters.

In fact, astronauts might not even need to lift off with any selenomelanin onboard to protect against radiation in space.

During the course of their study, the researchers found that they could get bacteria to produce the biomaterial by feeding them certain nutrients — meaning future Mars colonists could potentially create their own radiation-blocking selenomelanin from the surface of the Red Planet. 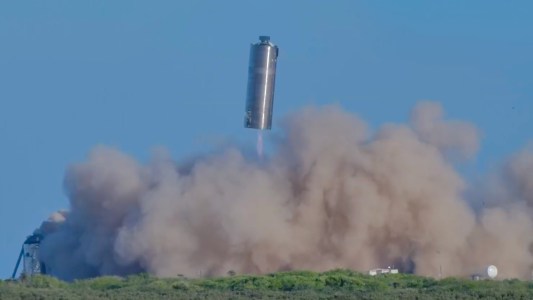 The first Starship test flight was a success, with the massive SpaceX rocket lifting off from a base in Texas and landing less than a minute later.