Just before sunset on August 4, an early version of what could be the most powerful spacecraft ever built lifted off from south Texas.

The SpaceX rocket — called Starship — peaked about 500 feet in the air before descending onto a nearby launchpad less than a minute later.

The Starship test flight was just one small “hop” for a rocket, but it brings us closer to the next big leap in space exploration: a crewed Mars mission.

But the prototype is tiny for a rocket: the final version will be four times as tall, and rather than featuring just one powerful engine, it’ll have six. The extra power will be needed because the company hopes to use Starship to ferry people to Mars.

SpaceX’s goal is for Starship to transport up to 100 people at a time to the Red Planet. This initial “hop” is a good start, but it will need to be repeated by several more short flights, followed by higher altitude flights, Musk said on Twitter.

SpaceX had to build several prototypes before finally making one that could hop, so it’s hard to say how long it’ll take to get through the rest of the development process.

While SpaceX still has a lot of work ahead before it can send people to Mars, the Starship test flight was an important step toward that goal.

Beyond a Mars Mission

Another ambitious plan for Starship involves something wholly unique to spacecraft: Earth-to-Earth transportation.

SpaceX plans to create offshore ports around the world and then use them as launch and landing spots for trips between major cities. A single Starship rocket could then transport as many as 1,000 people at a time between any two ports in less than an hour.

In June, Musk claimed that the first test flights for this system could be just two to three years away, but that timeline is incredibly ambitious given that a Starship hasn’t flown more than a few hundred feet yet.

Starship could also have important applications in space other than Mars. Currently, NASA’s Saturn V holds the payload record with its ability to carry 120 tons into Earth’s orbit. But Starship will be able to ferry up to 150 tons.

This strength combined with the fact that it’ll be reusable (unlike many of today’s rockets) would make sending cargo to the ISS or placing large satellites into orbit much more cost-efficient. 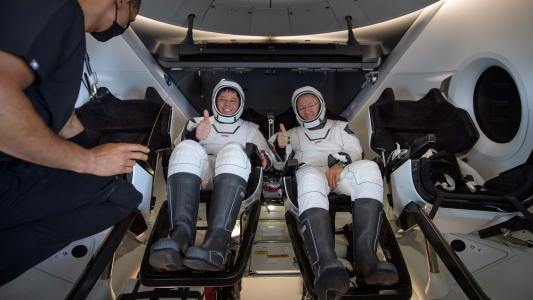 A SpaceX Crew Dragon spacecraft with two astronauts onboard has returned to Earth from the International Space Station, marking a milestone in spaceflight.