Rogue planets wander the spaceways, untethered from any star — celestial bodies comparable to planets like those in our own solar system, but lost in interstellar space.

Now, a team of astronomers has found the largest number of rogue planets yet discovered. The 70 rogue planets they located roughly doubles the number of known nomads, Space.com reported.

“We did not know how many to expect and are excited to have found so many,” Núria Miret-Roig, an astronomer at the University of Vienna and the study’s first author, said.

The researcher’s discovery may help us to better understand these strange travelers, and while it’s the most we’ve seen yet, it could be a tiny fraction of the rogue planets out there to be found.

“There could be several billions of these free-floating giant planets roaming freely in the Milky Way without a host star,” astronomer and project leader Hervé Bouy said in a statement.

Rogue planets wander the spaceways, untethered from any star.

Mysterious voyagers: Because we’ve found so few of them, our understanding of the nature and origin of rogue planets is woefully lacking, as the researchers point out in their paper, published in Nature Astronomy.

Theories of their origin include forming out of condensing gas clouds that are too small to create stars, or planets which were somehow freed from their orbits around a star, CBS reports.

We also don’t know how common these lost exoplanets are — as Space.com points out, this gaggle of rogue planets provides supporting evidence for the theory that they are actually common in the Milky Way — perhaps even more common than orbiting planets.

Hunting down a rogue: Usually, exoplanet discovery depends upon the stars. Astronomers look for tiny differences in star brightness or little gravitational dips as the planet passes in front of and behind the host star. Analyzing the light passing through a planet’s atmosphere helps us understand their composition and size.

But that dog won’t hunt when it comes to rogue planets — there’s no starlight to see!

Instead, the researchers analyzed two decades worth of data from ground and space telescopes — namely, the European Southern Observatory (including the very literally named “Very Large Telescope”) and the European Space Agency’s Gaia satellite.

“We used tens of thousands of wide-field images from ESO facilities, corresponding to hundreds of hours of observations, and literally tens of terabytes of data,” Bouy said.

Combining the terrestrial and heavenly data, they measured the tiny little motions and the changes in color and brightness of millions of light sources in a slice of sky containing the Scorpius and Ophiuchus constellations.

“These measurements allowed us to securely identify the faintest objects in this region, the rogue planets,” Miret-Roig said.

They were able to identify between 70 to 170 gas giant (or Jupiter-like) rogue planets, Space.com reported. But because their method couldn’t pin down the object’s exact size very well, some of these may be more like “failed stars,” rather than rogue planets, hence the range.

Using decades of data, the team has doubled the number of known rogues in the Milky Way — they may even be more common than orbiting worlds.

With so many more rogue planets now known to be zipping around the galaxy, the researchers hope that new advancements in telescope technology will allow them to begin unlocking their secrets. And what’s better than a Very Large Telescope?

An Extremely Large Telescope, of course! The ELT, under construction in Chili’s arid Atacama Desert, will be able to spot even more minute details than the telescopes the astronomers used to find their rogue planets. Due to come online later this decade, it may make these wandering worlds less of a mystery — and find new ones.

“These objects are extremely faint and little can be done to study them with current facilities,” Bouy said. “The ELT will be absolutely crucial to gathering more information about most of the rogue planets we have found.” 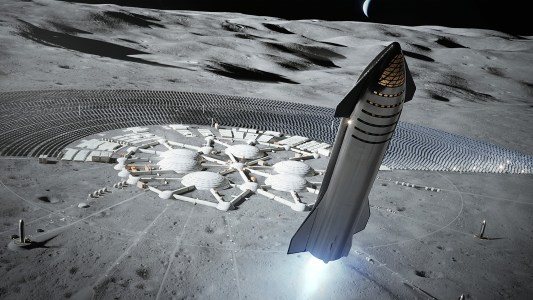 SpaceX’s Mars-bound Starship — the largest spacecraft ever built — is expected to undergo its first orbital test flight in March 2022.

Aerospace
SpaceX’s Starship is ready for its first trip into space
By Kristin Houser
Subscribe to Freethink for more great stories
Subscription Center
Sections
Video
Freethink
Subscribe
We focus on solutions: the smartest people, the biggest ideas, and the most ground breaking technology shaping our future.
Subscribe