The largest spacecraft ever built is expected to reach orbit for the first time in March 2022 — and if all goes as planned, we’ll be a huge step closer to a future in which spaceflight is cheaper and more accessible than ever before.

The challenge: By sending instruments and people into space, we can learn things about the universe that Earth-based observations simply can’t tell us — but launch costs severely limit our extraterrestrial reach.

That’s because every extra ounce of weight included in a rocket’s payload increases the amount of expensive (and also heavy) fuel required to break free of Earth’s gravity. It’s even more costly to send large instruments into space, as they require larger, heavier rockets (and, thus, even more fuel).

Then there’s the cost of the rockets themselves — most are designed for just one launch, and after delivering their payloads, they either crash back down to Earth, burn up in the atmosphere, or become space junk.

“Starship would totally change the way that we can do solar system exploration.”

SpaceX’s Starship: SpaceX has been a leader in the development of reusable rockets, which land safely back on Earth after launch. After refurbishment, they can then be launched again and again, which cuts the cost of each launch.

In 2016, the company began developing a massive launch system, consisting of a 230-foot first-stage booster rocket (called Super Heavy), topped by a 165-foot spacecraft (the Starship).

When complete, Starship is expected to be the world’s largest, most powerful launch system. The current record holder — NASA’s Saturn V, used for the Apollo moon missions — was slightly shorter and produced just 7.8 million pounds of thrust at liftoff, compared to Starship’s 17 million pounds.

The system is designed to carry a whopping 220,000 pounds of payload into low-Earth orbit — more than four times the max payload of SpaceX’s Falcon 9 — but what’s really exciting about Starship is the fact that it’s designed to be fully reusable.

CEO Elon Musk estimated that the ability to reuse the Starship could cut the cost of a launch down to just $2 million.

Why it matters: David Todd, an analyst at Seradata, told Science Magazine that $10 million is a more realistic estimate for Starship launches to low-Earth orbit, but even at that price, the craft could dramatically increase access to space.

“The low cost of access has the potential to really change the game for science research,” Andrew Westphal, a physics lecturer at UC Berkeley, told MIT Technology Review. “You can imagine privately financed missions and consortia of citizens who get together to fly things.”

In addition to facilitating rideshare-type missions, Starship could also cut the cost of deploying large instruments — the recently launched James Webb Space Telescope, for example, would’ve fit with plenty of room to spare.

“Starship is designed to be a generalized transport mechanism for the greater solar system,” Musk said in November 2021. “You could get a 100-ton object to the surface of Europa. It’s a lot more than you could do with a smaller rocket. So I think it’s very exciting.”

Add 40 or so cabins to a Starship — as Musk plans to do — and you can use the vehicles to start populating Mars (provided you refuel in space).

“You could conceivably have five or six people per cabin, if you really wanted to crowd people in, but I think mostly we would expect to see two or three people per cabin, and so nominally about 100 people per flight to Mars,” Musk said in 2017.

(It is worth noting, however, that missions to higher orbits or deep space would cost more than the low-Earth orbit estimates.)

What’s new? In August 2020, SpaceX completed its first successful test flight of a Starship prototype, sending a shorter version of the rocket on a “hop” of 500 feet into the air.

Since then, the company has sent Starship prototypes farther above Earth’s surface (successfully landing some of them), and now, its 20th Starship prototype (SN20) is undergoing engine testing at a launch site in Texas, in anticipation of an orbital test flight.

This will be the first test flight of a complete Starship system — the others didn’t include the Super Heavy booster — and the first to cross the border into space. (That’s about 62 miles up — the highest a Starship prototype has flown so far, without crash landing, is 6.2 miles.)

The FAA is currently assessing the potential environmental impact of SpaceX’s orbital test flight. That process is expected to wrap up by February 28, meaning the launch could happen as soon as early March.

Looking ahead: In November 2021, Musk said SpaceX could conduct a dozen or more test flights of Starship in 2022. At that time, he was anticipating that the first could happen as soon as January, so the FAA hold up could potentially lower the number.

If the first orbital test flight does happen in March, though, we can likely expect to see many more before the end of the year, and another of Musk’s November predictions — the carrying of valuable payloads in 2023 — could still be met.

From there, Starship could begin enabling all kinds of missions that aren’t currently possible.

“Starship would totally change the way that we can do solar system exploration,” Ali Bramson, a planetary scientist from Purdue University, told MIT Tech Review. “Planetary science will just explode.” 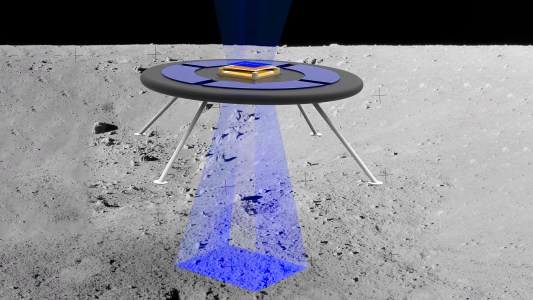 MIT engineers have designed a levitating space rover that could allow us to explore parts of the moon that are too rough for rolling rovers.