The Hubble Space Telescope is living on borrowed time. The iconic satellite was only supposed to be in operation for 15 years and has now lasted for more than 30.

Still, Hubble won’t live forever, and in just a few weeks, its much-anticipated successor, the James Webb Space Telescope, is set to launch — but will it be able to fill its predecessor’s massive shoes?

The Hubble years: Space telescopes are hugely important to astronomy — our planet’s atmosphere distorts and blocks light before it enters telescopes on land, so by placing observatories in space, we can obtain better images of distant objects.

For the last three decades, Hubble has been the biggest and most powerful space telescope ever built.

Since launching in 1990, it has used an array of instruments to observe ultraviolet, visible, and (to a lesser extent) infrared light throughout the universe. These observations have revolutionized astronomy, helping scientists map dark matter, discover black holes, and more.

End of an era: Hubble is now nearing the end of its life.

Between 1993 and 2009, NASA used Space Shuttles to send astronauts to service the telescope five times (infamously, the telescope had to be fixed immediately after its launch). But NASA has retired the Space Shuttle, meaning it no longer has a way to manually repair, replace, and upgrade Hubble’s tech.

“I fear the space community is really going to feel the loss when Hubble stops working.”

In 2021, so far, the telescope went offline three times due to technical problems — prior to that, it hadn’t gone offline since 2018 — and while NASA was able to overcome each issue remotely, that won’t always be the case.

“Someday, a component will randomly fail that we won’t have a backup for,” Paul Hertz, director of NASA’s astrophysics division, told Business Insider in July. “That’s the most likely way the Hubble mission will end.”

NASA is hopeful that Hubble will continue making observations until at least 2026, but it aims to have its successor — Webb — in place long before then.

Road to launch: NASA, the European Space Agency, and the Canadian Space Agency began developing the space telescope that would become Webb in 1996, with a plan to launch it in 2007.

Since then, the $9.7 billion telescope’s launch has been pushed back, year after year, for over a decade, due to technical issues, budgets overruns, the pandemic, and more — but the wait for Webb appears to be coming to an end. Finally.

In October 2021, the telescope completed its 5,800-mile journey from California to South America. It’s now fully fueled at Europe’s Spaceport in French Guiana and ready to be attached to the Ariane 5 launch vehicle that will ferry it into space — as soon as December 24.

Webb vs. Hubble: Webb isn’t designed to be an exact replacement for Hubble. Unlike its predecessor, the new space telescope will focus on infrared light observations, which are useful for studying objects that are really far away.

Instead of circling Earth, Webb will follow our planet’s orbit around the sun from about a million miles away. Its mirror is 21 feet wide, while Hubble’s was just 8 feet, and this increased size should allow it to collect more light and see farther back in time.

“What we’re going to get is a telescope that’s about 100 times more powerful than Hubble,” Amber Straughn, an astrophysicist at NASA who works on Webb, told Vox in September.

“This thing is enormous,” she added. “Webb is by far the biggest telescope NASA’s ever attempted to send into space.”

The limitations: Webb might be better than Hubble at collecting data in infrared, but it’ll be less adept at seeing shorter wavelengths, in ultraviolet and visible light.

“So much of astronomy, especially when it comes to understanding temperature and chemistry in outer space, hinges on the information you can really get from it,” he continued. “I fear the space community is really going to feel the loss when Hubble stops working.”

Astronomers might not have to endure that loss for long, though.

Filling the gap: China expects to launch the Chinese Space Station Telescope (also known as “Xuntian”) in 2024 — it’s designed to collect ultraviolet and visible light observations with a mirror about the size of Hubble’s but with a field of view 300 times larger.

NASA is also developing the Large Ultraviolet Optical Infrared Surveyor (LUVOIR), a space telescope that would observe the same wavelengths of light as Hubble (ultraviolet, visible, and near-infrared) but produce images six-times sharper.

“LUVOIR’s goal is to determine if there are other Earths.”

In addition to improving our understanding of our own solar system, LUVOIR would help us study the atmospheres of distant exoplanets, assisting in the hunt for ones that may be habitable.

“LUVOIR’s goal is to determine if there are other Earths,” Aki Roberge, LUVOIR study scientist and NASA astrophysicist, told Air and Space Magazine in April. “People have tried to get at this in other ways, but we strongly believe this has the highest probability of working.”

LUVOIR wouldn’t be cheap — the upper estimate for the project’s lifetime budget is $24 billion, and even a smaller version of the space telescope would cost at least $12 billion.

If LUVOIR is approved, though, developers are hopeful it could be ready for launch as soon as 2039. Hubble will likely have retired years prior to that, but if all goes well with the upcoming Webb launch, astronomers will have plenty of new infrared observations to explore until then. 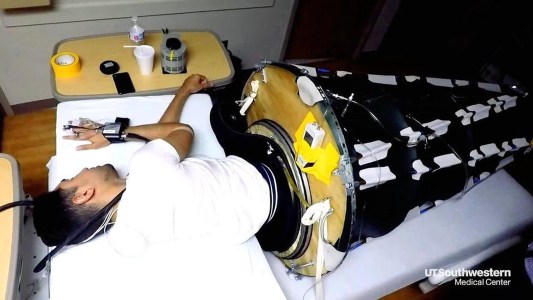 A sleeping bag designed for use in microgravity could protect astronauts’ vision by pulling eyeball-deforming fluids away from their brains.