NASA is sending a gigantic helium balloon to the edge of space. The mission is to launch a new kind of stratospheric telescope, but rather than making the journey aboard a rocket, it’s getting a lift from a balloon the size of a football stadium.

This balloon-borne telescope could let astronomers study distant objects with the latest tech at a fraction of the cost currently spent on orbital telescopes and without expending any rocket fuel.

Space telescopes: Telescopes work by using mirrors or glass lenses to collect and focus light from the sky. Earth’s atmosphere can distort and block this light before it reaches a telescope on the ground, so astronomers have developed space-based telescopes.

These telescopes orbit the Earth on satellites, recording images from a vantage point beyond the troublesome atmosphere, giving astronomers a clear view of the universe.

The $5 billion question: Hubble is probably the most well-known space telescope, and it’s hard to overstate its impact on astronomy — using Hubble data, scientists have discovered new black holes, determined the weight of the Milky Way, pinned down the age of the universe, and more.

Those discoveries didn’t come cheap, though.

It cost NASA and the ESA nearly $5 billion to build Hubble and put it in orbit, 340 miles above Earth’s surface. The telescope also has to be maintained in space, meaning every repair mission or upgrade has involved deploying other spacecraft or astronauts — again, not cheap.

Float on: Balloon-borne telescopes are an alternative to satellite and ground-based telescopes.

These telescopes are carried to an altitude of about 25 miles by stratospheric balloons — that puts them above the densest part of Earth’s atmosphere, which means they can see space more clearly than telescopes on the ground.

Because they don’t require any rocket launches, balloon-borne telescopes are also more environmentally friendly and far cheaper than space telescopes — but they do have their shortcomings.

Traditionally, balloon-borne telescopes have only been able to remain aloft for a few days at a time, which has limited their use. It can also be difficult to keep a telescope stable long enough to image far away objects as the balloon drifts through the atmosphere.

The SuperBIT project: Several years ago, NASA and the Canadian Space Agency began working with researchers at Princeton University, Durham University, and the University of Toronto to develop a better balloon-borne telescope.

They call it the Super-pressure Balloon-borne Imaging Telescope (SuperBIT), and in April, it will be lifted high above Earth’s surface by a balloon that, when fully inflated, could contain a football stadium.

This balloon is designed so that the pressure within it is always slightly higher than the pressure outside it. That allows the balloon to not only stay afloat for months instead of days, but also maintain a stable altitude.

The telescope, meanwhile, sits on a platform below the balloon. During a 2019 test flight, the team demonstrated the system’s ability to remain stable long enough to image stars with near-Hubble resolution.

“A useful analogy for this level of stability is threading a needle at the top of the CN Tower from Toronto’s Centre Island [roughly 1.5 miles away] and keeping the thread from touching the sides of the needle for up to 60 minutes,” they write on a project website.

Looking ahead: SuperBIT will make its operational debut in April 2022, lifting off from Wanaka, New Zealand.

It will circle the Earth several times, using the sun’s energy to recharge during the day. At night, it will capture photos of colliding star clusters that astronomers hope will help them better understand dark matter, which is invisible but can bend light.

In addition to wirelessly transmitting data to scientists, the balloon-borne telescope is also set up to deploy parachute-equipped hard drives when it’s over land — just in case its eventual landing is rough or over water.

If the project is a success, future flights could record different types of images — researchers would just need to equip the telescope with whatever imaging tech is necessary to get the job done.

“A lot of people want the capabilities that Hubble has,” researcher William Jones told Science Magazine in 2019. “Once you’ve demonstrated that this works, it would make sense to fly it at every opportunity.” 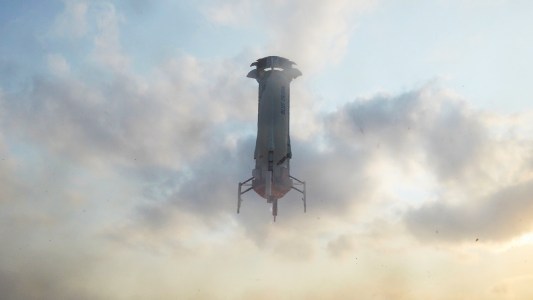 A Blue Origin flight on July 20 marked the first time a pilotless spacecraft has flown with a crew consisting solely of space tourists.