A high-tech sleeping bag developed by scientists at the University of Texas Southwestern (UTSW) might save the vision of Mars astronauts — by stopping their eyeballs from deforming.

The challenge: When you get out of bed in the morning (or afternoon — no judgment), gravity pulls the fluids in your body down toward your feet. That doesn’t happen for astronauts in microgravity, and as a result, more than half a gallon of fluid can gather in their heads.

“It would be a disaster if [Mars] astronauts couldn’t see what they’re doing.”

This fluid can cause a vision-impairing condition called “spaceflight-associated neuro-ocular syndrome” (SANS), which is characterized by a flattening of the eyeballs and a swelling of the optic nerves.

“You can’t stand up in space to unload the pressure,” Michael Stenger, a scientist with NASA’s Human Health Countermeasures Element, said. “That’s the problem.”

Why it matters: More than half of all NASA astronauts who spent at least six months on the International Space Station reported vision problems, but thankfully, most had their sight return to normal once they were back on Earth.

However, we don’t know how microgravity would affect them during longer space missions — such as trips to Mars — or whether the impact of SANS would linger after they returned home.

“It would be a disaster if [Mars] astronauts had such severe impairments that they couldn’t see what they’re doing and it compromised the mission,” researcher Benjamin Levine said.

The idea: To combat SANS, the UTSW team developed a cone-shaped sleeping bag that seals around the waist and uses vacuum technology to pull body fluids from the head toward the feet.

To test it, they had about a dozen volunteers lie down for three days straight. They then measured the pressure in participants’ heads and found that it was enough to flatten their eyeballs slightly.

The volunteers later return to the trial center for another three days of lying down, but this time, they spent 8 hours of each day inside the sleeping bag. When the pressure in their heads was measured after that stint, it wasn’t enough to deform their eyeballs.

The big picture: The sleeping bag is still a prototype, and because it’s only been tested on Earth, we don’t know for sure that the results of this study would translate to space or how much time an astronaut would need to spend in the device for it to protect their eyes.

SANS is also just one of the many threats to astronauts’ health NASA needs to consider before sending anyone on longer-term missions — astronauts also experience muscle loss, decreased bone density, increased exposure to space radiation, and more.

The sleeping bag won’t solve all of those issues, but there is a chance it could do more than just prevent SANS.

“[I]t’s certainly possible there are other effects of brain pressure we haven’t documented yet,” Levine said.

“The astronauts report something they call the ‘space stupids.’ They make more mistakes than they think they should,” he continued. “Whether that has anything to do with the inability to lower the pressure, we don’t know.” 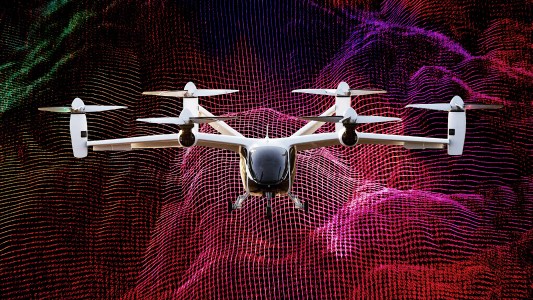 France will soon begin testing electric air taxis at a hub outside of Paris, with plans to have dedicated flying taxi routes ready in time for the Olympic Games.