An international team of astronomers has conducted the biggest survey of stellar nurseries to date, charting more than 100,000 star-birthing regions across our corner of the universe.

Stellar nurseries: Outer space is filled with clouds of dust and gas called nebulae. In some of these nebulae, gravity will pull the dust and gas into clumps that eventually get so big, they collapse on themselves — and a star is born.

These star-birthing nebulae are known as stellar nurseries.

This is partly because it’s hard to see what’s going on in stellar nurseries — the clouds of dust obscure optical telescopes’ view — and also because there are just so many of them that it’s hard to know what the average nursery is like.

The survey: The astronomers conducted their survey of stellar nurseries using the massive ALMA telescope array in Chile. Because ALMA is a radio telescope, it captures the radio waves emanating from celestial objects, rather than the light.

“The new thing … is that we can use ALMA to take pictures of many galaxies, and these pictures are as sharp and detailed as those taken by optical telescopes,” Jiayi Sun, an Ohio State University (OSU) researcher, said in a press release.

“This just hasn’t been possible before.”

Over the course of the five-year survey, the group was able to chart more than 100,000 stellar nurseries across more than 90 nearby galaxies, expanding the amount of available data on the celestial objects tenfold, according to OSU researcher Adam Leroy.

New insights: The survey is already yielding new insights into stellar nurseries, including the fact that they appear to be more diverse than previously thought.

“For a long time, conventional wisdom among astronomers was that all stellar nurseries looked more or less the same,” Sun said. “But with this survey we can see that this is really not the case.”

“While there are some similarities, the nature and appearance of these nurseries change within and among galaxies,” he continued, “just like cities or trees may vary in important ways as you go from place to place across the world.”

Astronomers have also learned from the survey that stellar nurseries aren’t particularly efficient at producing stars and tend to live for only 10 to 30 million years, which isn’t very long on a universal scale.

Looking ahead: Data from the survey is now publicly available, so expect to see other researchers using it to make their own observations about stellar nurseries in the future.

“We have an incredible dataset here that will continue to be useful,” Leroy said. “This is really a new view of galaxies and we expect to be learning from it for years to come.” 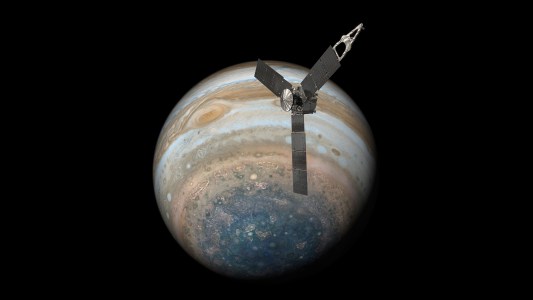 NASA has shared new photos of Ganymede taken by the Juno probe when it was just 645 miles away from Jupiter’s icy moon.