NASA’s massive moon-bound rocket only has one major test left before launch — and barring any big issues, the agency is on track for a crewed moon landing in 2025.

Only one rocket — the Saturn V — has ever carried humans beyond low-Earth orbit, and NASA retired it in 1973 after the final Apollo mission. In 2011, it began developing the Space Launch System (SLS) to be the next rocket to take humans to the moon and beyond.

NASA has already spent a mindblowing $23 billion developing the SLS, and launches are expected to cost $4.1 billion each. More than 1,100 companies have contributed to the rocket’s development, with Boeing taking on the lion’s share of the work (and funding).

The farther away the destination, the faster a rocket needs to travel to reach it — to make the journey to low-Earth orbit, for example, a speed of 17,400 mph will do, but to break free of Earth’s gravity and reach the moon, a rocket needs to break 25,000 mph.

The amount of fuel needed to reach those speeds depends on the weight of the payload. Tiny satellite? Less fuel. But the 36-ton Orion capsule, containing four astronauts and their supplies? More fuel. A lot more.

More fuel means bigger fuel storage containers, and the weight of the fuel and those containers then has to be factored into the speed equation, meaning you need even more fuel to lift your rocket to reach the target speed.

That’s why NASA needs a 2,750-ton rocket taller than the Statue of Liberty to send four astronauts to the moon.

NASA hasn’t made any real attempts to return to the moon since 1972. So why, after 50 years, is it investing so much time and money in returning there now?

Science: Data collected during the Apollo missions has been used in more than 2,500 academic papers, and as our technology has improved, we’re gleaning even more information from the samples the Apollo astronauts brought back to Earth.

“With very few exceptions, no other scientific expedition is still producing this much new science … these moon rocks have not yet given up all of their secrets, and they likely still won’t 50 years from now,” ​​Michael Shara, a curator at the American Museum of Natural History, said in 2019.

Here’s the kicker: the Apollo astronauts only explored 5% of the moon’s surface.

That means we’re not even close to exhausting the moon’s scientific potential — by studying it, scientists expect to learn more about the moon itself, our solar system, and Earth, including its early composition and possibly how life evolved on it.

Money: Science isn’t the only potential benefit to going back to the moon — there’s potential for mining the valuable resources on the moon, including:

Mars: Speaking of which, NASA’s next major goal in crewed space exploration is to put people on Mars. The trip will take about seven months, and NASA plans to have astronauts stay on the Red Planet for about a year before the long trip back home.

NASA wants to use the moon as a testbed for the systems and processes it plans to employ on Mars bases — after all, it’s better to find out something doesn’t work when astronauts are only 240,000 miles away from Earth than 140 million miles.

NASA’s original plan was to launch the SLS in 2016, but numerous delays have pushed back the timeline. On March 18, the agency announced that the rocket was finally in place on its launchpad at Kennedy Space Center for the final test before launch: a wet dress rehearsal.

The wet dress rehearsal was supposed to run from April 1-3, but it was paused on the 2nd due to weather and then stopped on the 3rd to troubleshoot issues with two fans. It resumed on April 4, but was stopped again, this time due to problems with a valve.

It’s not yet clear when NASA will attempt the wet dress rehearsal again — the earliest it could happen is April 9 — but once it’s done, the next step will be using the SLS to send an uncrewed Orion capsule on a trip around the moon.

That could happen as soon as June 2022, and a moon-orbiting mission with a crew could follow as soon as 2024.

NASA hopes to launch a second crewed SLS again in 2025. That Orion capsule will dock with a SpaceX-developed lander waiting in the moon’s orbit. The lander will then transport two crew members to the moon’s surface — more than 50 years after NASA last put boots on the lunar ground. 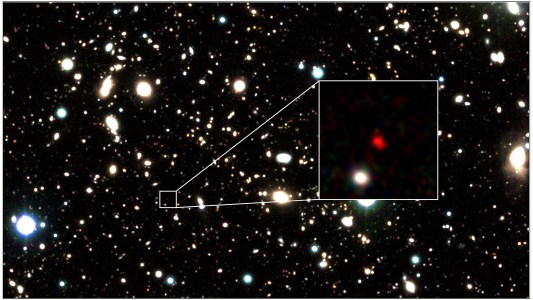 Astronomers have discovered a new farthest galaxy from Earth, and it could change what we thought we knew about the early universe.