NASA is taking a close look at SpinLaunch, the California startup developing a radical satellite launch system that flings payloads into space — an approach that could make satellite launches cheaper and more environmentally friendly.

The old way: The basics of satellite deployment haven’t changed much over the past 70 years — load satellites into a rocket, blast the rocket into space, and then release the satellites at the target altitude.

Reusable rockets mean we no longer have to sacrifice a rocket for every satellite launch, which has cut down on their cost. The propellant needed to break free of Earth’s gravity is still extremely expensive, though, which limits how affordable space can be.

It’s developing a massive vacuum-sealed centrifuge to spin a satellite launch vehicle until it reaches speeds up to 5,000 miles per hour. The 300-foot-tall centrifuge then releases the vehicle at precisely the right moment to hurl it about 30 miles above Earth’s surface.

The launch vehicle then splits open and falls back to Earth, while a small booster on the satellite fires, providing the final push the satellite needs to reach its target orbit.

This approach eliminates the need for 70% of the fuel that would normally be used to launch a satellite. At least, it’s supposed to — SpinLaunch hasn’t built its orbital launch system yet and doesn’t expect to have one ready until 2025.

It has, however, already built a 165-foot suborbital launch system to test its technology. That system accelerates launch vehicles to speeds in excess of 1,000 mph before throwing them into the air — and NASA wants in on it.

What’s new? On April 6, SpinLaunch announced that it had signed a Space Act Agreement with NASA. Through this partnership, SpinLaunch will develop and fly a NASA payload using its suborbital launch system in late 2022. It will then recover and return the payload to NASA.

SpinLaunch and NASA will review the data from the launch to see if there might be an opportunity for the startup to provide the space agency with commercial launch services in the future.

Looking ahead: SpinLaunch’s orbital system isn’t going to do away with the need for traditional rocket launches.

The expected max payload weight is only ​​440 pounds (about the weight of two small satellites), and astronauts certainly could not survive the G forces from acceleration to hypersonic speeds.

Still, if SpinLaunch can pull off their system, it could become a cheaper, cleaner way to get small and medium satellites into space. 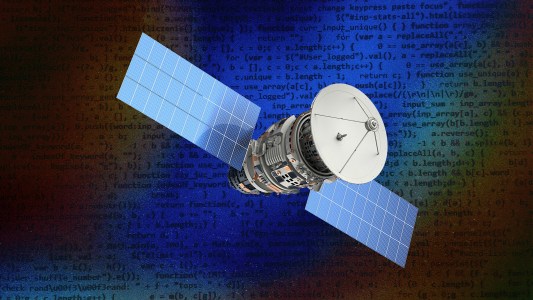 A recent satellite hacking shows that end-of-life satellites may be vulnerable.

Hacking
An old satellite was hacked to broadcast signals across North America
By B. David Zarley
Subscribe to Freethink for more great stories
Subscription Center
Sections
Video
Freethink
Subscribe
We focus on solutions: the smartest people, the biggest ideas, and the most ground breaking technology shaping our future.
Subscribe