Scientists think a trip to Mars with our current rockets would take about seven months — too long, according to NASA, to easily host a sustained human habitation.

So researchers from McGill University have proposed a new idea that will cut that travel time down to just 45 days. All it takes is hitching a ride on a giant laser.

The challenge: With the Mars Rover Perseverance, Lockheed Martin’s new Mars ascent vehicle, and many people training to live on Mars, we’ve heard a lot about the Red Planet lately. There is no doubt scientists have their eyes set on it, and a crewed Mars mission could be within reach.

“There are no fundamental roadblocks in developing such a system.”

But getting humans to Mars is one thing. Maintaining a colony there is another.

A human outpost on Mars would need regular resupplies of goods — food, tools, spare parts — anything necessary for human survival that can’t be found on the planet. And according to NASA, the seven months it takes to get ships from Earth to our neighbor planet is way too long.

We need to cut that travel time significantly to reduce exposure to galactic cosmic rays and solar storms. So NASA put out a challenge to all engineers: devise a way to carry a payload to Mars of at least 1,000 kg (the equivalent of about 2,200 lbs. on Earth) in less than 45 days, reports Phys.org.

“As more humans make the trip to sustain a long-term colony, we will need propulsion systems that get us there faster—if only to avoid radiation hazards,” Emmanuel Duplay, lead author on the study, told Phys.org.

Blast off: To race to Mars, the team wants to harness the power of a 10-meter wide laser array on Earth to power an orbiting spacecraft. The proposed laser would create a force that originates from Earth strong enough to propel a spaceship without having to lug heavy fuel up into space.

To make such a force, the laser would heat hydrogen plasma within the spacecraft. The superheated hydrogen gas would then drive the ship to Mars at a high velocity.

The idea, which they described in a paper in the journal Acta Astronautica, could be the solution for blasting essential supplies and astronauts to a Mars outpost in a fraction of the time that rockets would require.

To further reduce the ship’s weight, the team also proposes to eliminate the need for chemical propellants that are traditionally used to slow and stop the vessel during landing. Instead, it would use Mars’ atmosphere to “aerobrake” and slow the ship, reports Futurism.

“Now that we showed there are no fundamental roadblocks in developing such a system, the next steps are about dealing with the engineering challenges of a laser-powered thruster,” Duplay told Freethink. “We are already preparing an experiment to study some of the heat transfer aspects of this system, and hope to eventually build a small-scale prototype.”

Duplay theorizes that a laser-thermal expedition to Mars may launch ten years after the first human missions to the planet begin, reports Verve Times — around the mid-2040s.

“I am really hoping to see humanity explore and settle other bodies in the solar system in my lifetime. This is what this project is about. Laser-thermal propulsion is a technology that could truly enable exciting missions, long-term scientific and commercial activity in space, and could potentially power a future solar system economy,” Duplay said. 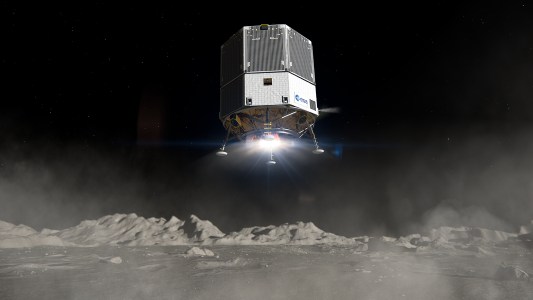 ESA plans to send a device that pulls oxygen from lunar regolith to the moon by 2025 and then build an oxygen-producing plant in the 2030s.

Aerospace
ESA plans to make the first oxygen on the moon
By Kristin Houser
Subscribe to Freethink for more great stories
Subscription Center
Sections
Video
Freethink
Subscribe
We focus on solutions: the smartest people, the biggest ideas, and the most ground breaking technology shaping our future.
Subscribe