NASA has selected space and defense contractor Lockheed Martin to build the Mars Ascent Vehicle, a first-of-its-kind rocket capable of launching from Mars’ surface with rock samples on board — returning a piece of another planet to Earth for the first time.

The plan: The Mars Ascent Vehicle is expected to play a key role in the Mars Sample Return mission, which began with the landing of the Perseverance rover in 2021.

In 2026, NASA plans to launch a new Mars lander containing the rocket and a rover developed by the European Space Agency (ESA). Once on the Red Planet, that rover will retrieve the rock samples currently being collected by Perseverance and bring them back to the lander.

The lander will use a robotic arm to load the samples into the Mars Ascent Vehicle. The rocket will then lift off from the Red Planet — something no spacecraft has done before — and deliver the rock samples to a new Mars orbiter the ESA expects to launch in 2026.

The orbiter will then return to Earth and throw the capsule containing the samples at our planet around 2031.

Why it matters: No one has ever brought samples of Mars back to Earth for analysis before, and NASA is hopeful the rocks will dramatically improve our understanding of the planet.

“[W]e expect jaw-dropping discoveries across a broad set of science areas, including exploration into the question of whether life once existed on Mars,” Thomas Zurbuchen, NASA’s associate administrator for science, said in September 2021.

What’s new? NASA has now awarded Lockheed Martin a contract worth up to $194 million to build the Mars Ascent Vehicle, bringing the next phase of the sample return mission one step closer to launch.

“Committing to the Mars Ascent Vehicle represents an early and concrete step to hammer out the details of this ambitious project not just to land on Mars, but to take off from it,” Zurbuchen said. “We are nearing the end of the conceptual phase for this Mars Sample Return mission, and the pieces are coming together to bring home the first samples from another planet.”

Looking ahead: Launching a rocket on Earth is tricky enough, and getting one to successfully lift off on Mars will be even more difficult — developers will need to take into account the planet’s low gravity, dusty surface, thin atmosphere, and other environmental conditions.

To overcome some potential pitfalls, NASA researchers have already started building and testing a unique launch system, which will actually throw the Mars Ascent Vehicle into the air, prior to the rocket’s ignition.

As part of the new contract, Lockheed Martin will build multiple units for testing, and if all goes according to plan, a flight-ready version of the rocket will be ready to begin its journey to Mars just four years from now. 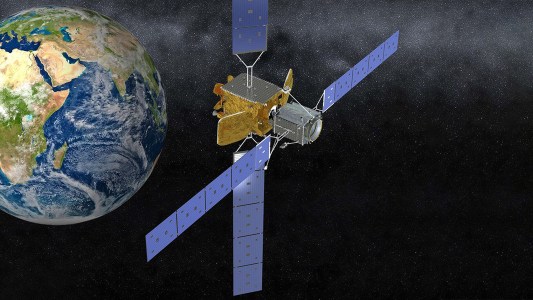 China has used a space tug to change the orbit of a defunct satellite, proving it’s a viable way to clean up some old space junk.