For centuries, surgeons have been working toward one goal: to do the most good for their patients while at the same time doing the least damage. One way to reduce this damage is by limiting the size and number of incisions they must make to get into the patient’s body.

This is the idea behind minimally invasive robotic surgery — the idea that surgeons can achieve similar results, but with smaller, and fewer, incisions.

And now, with single incision robotic surgery, that vision is advancing even further. First used clinically four years ago, this innovative approach has the potential to further reduce scarring, as well as enable new approaches to existing procedures.

“It’s allowing us to do surgeries differently than we do with [multi-port surgery],” says Dr. Michael Stifelman, director of robotic surgery at Hackensack University Medical Center (HUMC) in New Jersey. “What every patient wants is to get back to their life. Single-port robotics is allowing us to get them to that point more quickly.”

Watch our video on single-incision surgery:

What is single-incision surgery?

Over the years, robotic surgery systems have mostly had multiple arms. Single-incision surgery is done via a system with just one arm. The single arm houses several instruments, which emerge from the arm once it enters the body cavity — this allows the surgeon to use multiple tools at once through a single small entry point.

One of the leaders in single-incision technology is Intuitive, which for more than 25 years has been the pioneer in minimally invasive robotic surgical care. Among the robotic surgical systems Intuitive makes is the da Vinci SP (the SP stands for “single-port”). This system includes only one arm, rather than the four arms featured on the company’s flagship da Vinci multi-port system.

So far, surgeons globally have used single-incision surgery to operate on a wide range of tissue types, including prostate, bladder, kidney, gallbladder, and appendix. It has also been used for bariatric procedures.

By contrast, other surgical approaches typically require more, or larger incisions. In open surgery the surgeon cuts through a larger swath of skin and tissue to gain a broader view of the necessary organs. Even other minimally invasive procedures typically involve between three and five incisions.

Dr. Stifelman, one of the first surgeons to begin using single-incision surgery in the U.S., says that reducing the number and size of incisions has been his focus since he was just starting out in the field.

“When I was training, pretty much all the surgeries we did were through big incisions,” he says. “Even if you had to deal with a small area of the body, you still had to make a pretty big incision to get there… I realized there’s got to be a better way.”

What makes it a game changer?

Dr. Stifelman says that many of his patients appreciate the reduced scarring from single-incision procedures. “We can do very complex reconstructive procedures through just a small incision in [the patient’s] belly button, where it’s completely hidden,” he says.

“What every patient wants is to get back to their life.”

For some patients, the benefits can be more significant. Patients with heavy internal scarring from previous procedures, for example, might not be good candidates for open surgery or multi-port robotic surgery because it’s too risky. For these patients, a single-incision approach may allow them to have the procedure they need.

Such complex cases can bring great satisfaction, says Dr. Stifelman’s HUMC colleague, surgeon Mutahar Ahmed. “When you see one patient [two years after surgery], and he’s able to urinate normally, and this patient says, ‘Doc, thanks for giving me my life back,’ that’s the key,” he says. “That’s the energy [you need] to get through the next tough case.”

Intuitive is equally excited about the potential of single-incision surgery. “We’re providing surgeons with another tool in their toolbox,” says Iman Jeddi, who oversees the company’s SP operation. “We’re at the beginning of this journey, and there is a lot of possibility that the future holds for us.” 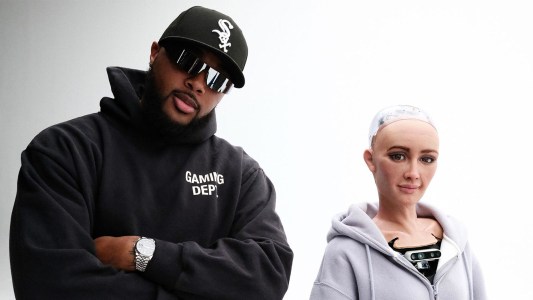 Sophia the robot has signed to XSET, a gaming organization and lifestyle brand focused on diversity and inclusion.

Robotics
Sophia the robot becomes first humanoid to be signed by a gaming org
By Kristin Houser
Subscribe to Freethink for more great stories
Subscription Center
Sections
Video
Freethink
Subscribe
We focus on solutions: the smartest people, the biggest ideas, and the most ground breaking technology shaping our future.
Subscribe