The automaker plans on offering an electrified, hybrid version of the sports car next year, Reuss said in a LinkedIn post, with a fully electric version to come at a still-unrevealed date.

“We will have an electrified Corvette next year, so it’s coming very quick,” Reuss told LeBeau, although he did not offer details like an exact date or just what “electrified” may mean.

“Electrified” implies any kind of electric engine usage, CNN reported, and seems to play into rumors that the newest generation of Corvettes may eventually come in a hybrid version.

Back in the race: GM was actually an early front runner in the race for electric vehicles, NPR reports, with their EV1 becoming the first mass-produced, major mark offering in the field in the late 1990s.

But the company fell behind competitors like Toyota’s popular Prius Hybrid and, of course, Tesla, which has streaked ahead of the competition and is now threatening to lap the field.

GM had big plans to enter the EV field, with 30 different offerings hopefully available by 2025. But slow sales and a full stop in Bolt production caused by a fire risk recall have complicated things, NPR reported.

What it means: While the electrified ‘Vette has been expected, auto journalists said, the full electric version was a surprise.

But there are reasons why the Corvette was a prime candidate to become an EV, Car and Driver’s Rich Ceppos wrote in an analysis of the announcement.

First is the Corvette’s place in car culture, Ceppos says; it has a reputation for punching above its weight, providing the performance and technological bells and whistles of higher-end marks like Ferrari and Porsche for a lot less.

With the other top sports car makers putting electric cars on the market, Corvette can compete yet again with the thoroughbreds.

Secondly, electrification has the potential to add power and performance, even if only used as a power-adder: see Formula 1’s energy recovery system, which harnesses kinetic energy to store in a battery that can then be re-deployed for extra horsepower at the driver’s discretion.

Plus, the C8 Corvette appears to have been designed to be hybridized from the jump, Ceppos said, with its front compartment set up to accommodate electric components.

Traffic jam: GM is not the only legacy automaker looking to eat into Tesla’s market share by leveraging already-famous vehicles and production capacity; perhaps most threatening to Musk’s EV dominance is Ford’s F-150 Lightning, with Detroit beginning to crank out the electric version of the most popular truck in America.

GM is hedging its bets, though; they plan on still offering gas-powered Corvette models, LeBeau reported. 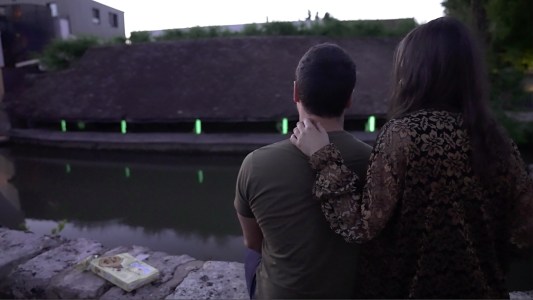 French commune Rambouillet is serving as a testing ground for the soft glow of bioluminescent bacteria on the street.