Armed with half a billion dollars in new funding, clean energy startup Helion claims it will generate electricity from a nuclear fusion device by 2024 — a milestone for a transition that could transform the world.

Nuclear fusion: When two hydrogen atoms fuse together, they release a tremendous amount of energy. This process (nuclear fusion) powers the sun and stars — and we really want to find a way to harness it here on Earth.

That’s because cheap, reliable nuclear fusion would change everything.

It doesn’t produce pollution (like fossil fuels) or long-lasting radioactive waste (like nuclear fission). Fusion would also be reliable (unlike solar and wind), and there’s enough hydrogen on Earth to provide us with clean energy for millions of years.

The challenge: Nuclear fusion can only happen under extreme pressure and heat, like in a giant star. To achieve fusion on Earth, we’ve had to build complex machines that can not only recreate the conditions needed to trigger fusion, but also withstand them.

We can do this. The problem is that we still need to put more energy into those machines than we’re able to get out of them, in part because we can’t sustain the reaction for more than a minute or so.

“If the output rate isn’t a lot higher than the input rate, it’s maybe scientifically curious, but it’s practically useless,” he continued.

“We’ll show that the world can count on fusion to be the zero-carbon energy source we desperately need.”

Polaris: On November 5, Helion announced that it had raised $500 million (led by a $375 million infusion from Open AI founder Sam Altman) to complete construction on Polaris, its seventh-generation prototype currently being built in Everett, Washington.

Helion expects this nuclear fusion device to be the first in the world to actually generate net electricity, and it says it’ll demonstrate that ability by 2024.

“Our 6th prototype demonstrated that we can reach this pivotal milestone,” Founder and CEO David Kirtley said in a press release. “In just a few years we will show that the world can count on fusion to be the zero-carbon energy source that we desperately need.”

A crowded field: Helion is just one of at least 35 companies across the globe trying to generate electricity from nuclear fusion. These join the many government scientists and academics that have been chasing the same goal for years.

They’re all approaching the problem from different angles, experimenting with various reactor designs and fuels, and making slow but steady progress.

However, it seems usable nuclear fusion is always just a few years away. Helion itself claimed back in 2014 that it would demonstrate net electricity in three years. Here we are seven years later hearing the same promise — is this time any different?

The big picture: Maybe, maybe not. Helion is undoubtedly closer to the goal than it was back in 2014. In June, its sixth-gen prototype (Trenta) heated a plasma to 100 million degrees Celsius — a key milestone in fusion and something no other private company had done before.

Even if Helion isn’t the first to achieve net electricity, though, it’s quite possible that someone is going to in the near future.

The benefits of usable nuclear fusion are simply so large that we all win from its existence.

A nuclear fusion device built by MIT and the startup Commonwealth Fusion Systems is another frontrunner — it hit the 100 million degrees Celsius mark in September, and its creators claim it will demonstrate net electricity by 2025.

From humanity’s perspective, it doesn’t really matter which group is first across the line — the benefits of usable nuclear fusion are simply so large that we all win from its existence.

However, even getting to net positive energy won’t be the end of the story. The next hurdles will be ensuring that the reaction is steady and reliable — no small feat when you’re running a mini-star. 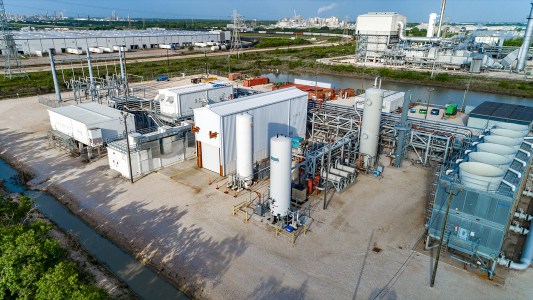 Net Power has designed a new kind of natural gas power plant that can efficiently capture almost all of the carbon dioxide it generates.