A new kind of natural gas power plant is beginning to catch on across the globe — one that makes it possible to generate electricity from fossil fuels while capturing the CO2 produced during the process.

The challenge: To combat climate change, we need to transition away from carbon-emitting sources of electricity, such as coal-fired power plants, and toward sources that don’t emit greenhouse gases, such as renewables and nuclear power.

However, while renewables are cheap and clean, they’re also inconsistent because they can depend on the time of day and weather conditions. Nuclear power is clean and consistent, but it takes a lot of time and money to build new plants.

Energy-efficient carbon-capture tech is built directly into the plant’s design — it’s not an afterthought.

Natural gas: Right now, the U.S.’s primary source of electricity is natural gas. It’s cheap, abundant, and reliable, and while it isn’t as environmentally friendly as renewables or nuclear, it is better than coal, producing about 50% less CO2 per megawatt-hour.

It is possible to make a natural gas power plant more eco-friendly by capturing, filtering, and sequestering (storing or burying) the CO2 it produces. However, the add-on facilities used for that purpose are extremely expensive, energy-intensive, and imperfect — some CO2 is still released.

Built by energy startup Net Power, this pilot plant incorporated energy-efficient carbon-capture tech directly into its design — not as an afterthought — and it could stop nearly 100% of the CO2 produced from being released into the atmosphere.

At the time, they hadn’t quite worked out how to make their fuel (a mixture of gas, CO2, and pure oxygen) burn consistently. But in the years since, it seems they’ve dialed in the perfect mix — all without releasing CO2 and air pollutants (including very harmful compounds like NOx) into the air.

Now, the company is in plans to build two more of its unique natural gas power plants in Colorado and Illinois — those will be commercial-scale plants, producing 280 megawatts of electricity each, compared to the 50 MW test facility in Texas.

Net Power has also announced plans to build a zero-emission natural gas power plant in Canada — it’s expected to start producing power by 2025. A large 300 MW plant in the U.K. is also under development — given regulatory approval, it could begin generating power by 2025, as well.

The big picture: As long as the world is relying heavily on natural gas to generate electricity, as it will for much of the foreseeable future, we need to make the process as clean as possible. In that respect, Net Power’s innovative design is a huge leap over not only coal but also existing gas and carbon capture plants.

Yet even if every natural gas power plant in the world relied on Net Power’s carbon-capture design, gas still wouldn’t be the most environmentally friendly energy source. Gas wells and pipes leak methane into the atmosphere and other contaminants into soil and groundwater.

The long-term goal of a world with net-zero emissions ultimately requires a transition to renewables, geothermal, and nuclear — and, hopefully one day, the holy grail of clean energy: fusion. 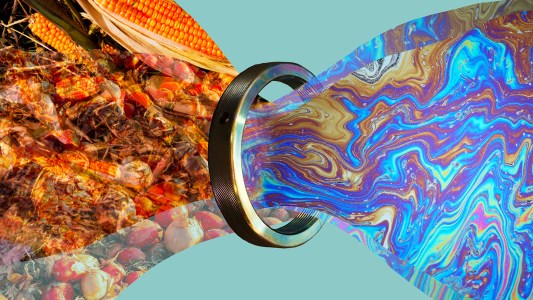 Agriculture
This machine can turn agricultural waste into fuel
Subscribe to Freethink for more great stories
Subscription Center
Sections
Video
Freethink
Subscribe
We focus on solutions: the smartest people, the biggest ideas, and the most ground breaking technology shaping our future.
Subscribe