For centuries, the best thing a doctor could do for someone who’d lost a limb was keep them from bleeding to death. This was done by applying a hot iron or boiling tar to the wound (without anaesthesia), up until 1718, when J. L. Petit invented the screw tourniquet (still no anaesthesia). But as medical knowledge grew, so too did our ability to treat amputations. We learned how to stop the bleeding without burning, how to disinfect the site of amputation, and how to anaesthetize patients.

But long after we’d discovered all those things, patients had very few options when it came to choosing substitutes for their original limbs. The prosthetic arm with a hook on the end, common still today, dates back to the 11th century. Prosthetic legs, meanwhile, didn’t change all that much from the renaissance until the early 20th century, when the aviator Marcel Desoutter lost his own leg and had the idea to craft a replacement using lightweight aluminum, rather than steel or wood.

Considering the slow evolution of prosthetics in the first two millennia of the common era, what we’ve seen in just the last 10 years–from both a functionality standpoint and an aesthetic one–is kind of mind-boggling. There’s Johnny’s arm, of course:

But there’s also Hugh Herr’s legs. Herr is the co-director of the Center for Extreme Bionics at MIT. When he was a teenager, he had both of his legs amputated below the knee after being stranded on a mountain and experiencing severe frostbite. The legs he wears now are arguably better than the ones he was born with. Here he is wearing them during a TED talk:

And here’s a closer look:

Herr’s legs enable to him to live just as fully as he did when he was biologically intact. Herr hasn’t just restored himself, however. His team also designed a prosthetic leg for Adrianne Haslet-Davis, who lost her left leg in the Boston Marathon Bombing. Here she is dancing publicly for the first time on her new leg:

Herr’s vision for the future of bionics is technology so advanced that it doesn’t just repair broken bodies–it makes them better than they were before their injuries. “I believe the next step in bionics is to increase the mergence of the built design world with biological tissues, electrically, mechanically, and chemically,” Herr said in a recent Reddit AMA. “The fundamental science and technology that will enable this mergence will not only end many disabilities, but will also serve as the same foundation to enable human augmentation, extending capability beyond innate physiological levels.”

The idea that prosthetics can make us better than normal is shared by most cutting edge bionics researchers. In an interview with Freethink, Michael P. McLoughlin of the Applied Physics Laboratory at Johns Hopkins, said that he wants to develop upper limb prostheses so advanced that we’re forced to consider whether these technologies provide an unfair advantage to the people who use them.

If you want to see more of Herr’s projects, you can check them out at BIONX, as well as at MIT’s Biomechatronics Group. And you should definitely watch Herr’s TED Talk, where you can see Haslet-Davis finish that dance:

The transformation in the bionics field isn’t just functional. We’re also seeing incredible shifts on the aesthetic front. And no one has broken more ground than industrial designer Scott Summit, whose work unites both form and function in a way that “invites engagement and connects the amputee with the world around.”

“If something feels medical, then we can only think of it as a medical adjunct,” Summit writes at his site. “If it instead complements the human form, taste and style, then it evolves from medical stopgap into something more human. It generates excitement, not pity.”

Summit accomplishes that paradigm shift with designs like these:

“The goal,” Summit writes, “was to rethink the nature of a prosthetic leg, imbuing it with all the personalization of a bespoke fashion product, while recreating body symmetry on the wearer. A 3D scan of the contralateral leg creates symmetric reference geometry, and the wearer is queried for design and material input.”

Check out Summit’s TED Talk for his full take on making prosthetics equally appealing and functional:

And make sure to watch (and share!) our episode about the Applied Physics Lab at Johns Hopkins, and the arm they designed for Johnny Matheny.

Bionics
Man builds his own bionic hand out of melted plastic bottles
After creating a bionic hand for himself, Peruvian engineer Enzo Romero launched a company to sell the low-cost prosthetics to others.
Up Next 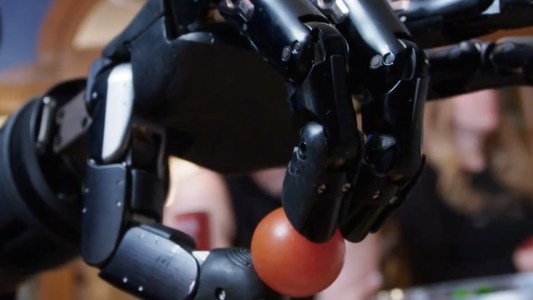 Bionics
The world's most advanced bionic arm
Subscribe to Freethink for more great stories
Subscription Center
Challenges
Video
Freethink
Subscribe
We focus on solutions: the smartest people, the biggest ideas, and the most ground breaking technology shaping our future.
Subscribe