In his 2018 book Future Presence, Peter Rubin chronicles the true story of a couple who met in VR, fell in love in VR, and ultimately got married — you guessed it — in VR. It’s a story that gives us a glimpse into the future of relationships, and one that tells us a bit about Rec Room, the gaming platform where it took place.

Last month, the Seattle-based gaming company announced a $100M financing round, putting its valuation at $1.25B, making it the first official software unicorn (a company valued at over a billion dollars) to emerge from the VR industry.

The announcement followed a breakout year for Rec Room, in which it tripled its player base, recording more than 1M monthly active VR users and 15M lifetime users.

What exactly is Rec Room and what makes it special — special enough to get married in — in a growing landscape of shared virtual spaces?

Rec Room is a free app that bills itself as “the best place to build and play games together.” It was first released in 2016 as a social VR world (sometimes also referred to as a “metaverse”), but over time expanded its availability to players on flat screens.

Unlike a conventional video game, Rec Room is not built around a quest or specific narrative. Rather, it’s a space where people can come together in both public and private rooms to hang out and play games. Players can also build custom virtual spaces that they and others can use.

CEO Nick Fajt said in an interview with Freethink that Rec Room was designed to promote direct human connection. Play is a vehicle for connecting with others. While there are competitive games, like paintball, laser tag, and dodgeball, it’s more in the vein of game nights with friends than competitive esports tournaments.

“Most social apps today are actually very isolating,” Fajt said. “You’re interacting with an algorithmic feed, not another human. We wanted to build a place where people could come together to meet new people and create new memories. That’s been our goal since day one and it remains our goal today.”

When VR headset sales initially failed to live up to industry expectations, Rec Room expanded from being a VR-exclusive platform to PC, PlayStation, iOS, and most recently Xbox. As a result, users in VR headsets can now play in real time with those on consoles and iPhones, or mix it up themselves.

“We want Rec Room to be the most radically cross-platform social app in existence,” Fajt said. “At the end of the day, Rec Room is trying to connect people, not devices.”

Rec Room saw a surge in growth during the pandemic, when people stuck at home turned to virtual world for connection. Fajt noted that teenagers aged 13 to 16 comprise Rec Room’s primary users — and points to these players as a consistent core audience even once restrictions lift.

“The pandemic accelerated trends we’d been seeing for several years,” Fajt told The Verge. “A lot of people are looking for a digital third place that’s distinct from home and school or work where they can meet up with friends, hang out, explore, and be creative. I think that’s been true whether teenagers were going to school physically or on Zoom. People need a space like this.”

Like Minecraft and Roblox before it, Rec Room has made building a core activity on the platform. Any user can build their own environments and games without needing to learn a complex programming language.

Tipatat Chennavasin, general partner of the Venture Reality Fund and an early investor in Rec Room, told Freethink in an interview that the app has remained popular across platforms because of this simple, in-app building approach.

“At their core has always been their amazing tools for user-generated content that allows creators to easily and collaboratively build experiences for everyone,” Chennavasin said.

The focus on community seems to be paying off; 2M players have already created content on the platform — over 13% of all Rec Room players.

“People are (now) spending more time in community-created rooms than in Rec Room’s own rooms,” Chennavasin said. “The diversity of experiences is amazing — everything from games, escape rooms, immersive plays, and more — all built by players in-game.”

An enthusiastic core community, a cross-platform approach to building within the world, and the compounding effects of the pandemic are all behind the recent fundraising boost — but underlying all of it is an expectation among investors that Rec Room will generate revenue.

Rec Room’s recently launched Creator Compensation program is a revenue-share program that allows creators to monetize their creations through tokens (that are subsequently exchangeable for fiat currency like dollars).

“Creators have built millions of Rooms inside of Rec Room; every day, they’re building tens of thousands of new Rooms for players to explore,” Fajt said. “This year we’re going to pay out over $1M to creators for all the amazing work (through the Creator Compensation program), and we see that number growing much much higher over the coming years.”

VR players now make up a minority of Rec Room’s audience, but Chennavasin sees it and other social VR applications driving headset sales, both because VR provides the most immersive way for audiences to be creative in these worlds and because now they have a means of monetizing their creative labor.

“We are already hearing about many people buying headsets specifically to use in Rec Room and VRChat, and especially with creator payments systems like what Rec Room recently introduced, we will see that investments in-headset (can) pay for themselves,” Chennavasin said.

Fajt said that Rec Room is planning an IPO in the years to come, but for now is focused on continuing to make sure the platform is a fun place for the community to play and build.

“The community creators are adding huge amounts of content every day, so Rec Room is constantly evolving,” Fajt said.

Editor’s Note: This article has been updated from a previous version to specify that Rec Room is the first software VR unicorn. 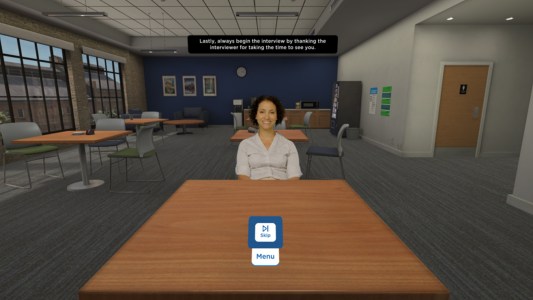 Goodwill and Accenture have teamed up to create “Project Overcome,” a VR experience that simulates the job-seeking process in hopes of curtailing recidivism.