Solar panels have shaken up the way we produce and consume electricity. By placing them on fields, walls, and rooftops, individual households and businesses can now generate their own power at relatively low costs — or even sell it to nearby power grids when their supply outpaces their consumption.

The challenge: Solar power will likely play an increasingly important role in curbing global greenhouse gas emissions as innovations continue to boost the efficiency of the technology.

One way solar could soon become more widely used would be to integrate solar panels onto a wider array of commonplace materials and technologies without inconveniencing the ways we currently use those things today.

Materials scientists have recently been exploring how solar panels could be made to blend in with their surroundings by making them more transparent. If achieved, energy harvesting devices could be discreetly placed on top of windows, display screens, or even human skin — expanding the reach of the technology even further.

By harnessing the unique properties of advanced solid materials, engineers have made progress toward transparent solar panels. But for now, even the latest designs allow less than 70% of incoming light to pass through them — not nearly enough for the devices to blend in with their environments.

The new design: A team of researchers in Japan have now made promising steps toward solving this transparency issue. Led by Toshiaki Kato at Tohoku University, the team’s innovative design works by exploiting complex interactions between ultra-thin materials.

The new setup is based on a conductive material called indium tin oxide (ITO), which is both transparent and colorless. To manufacture their solar cell, Kato’s team exposed an ITO electrode to a vapor of tungsten disulphide (WS2). Under just the right conditions, the vapor deposited an atom-thick layer of WS2 onto the ITO surface, which acts as a semiconductor.

By coating the ITO with a carefully chosen selection of thin metals, and placing an insulating layer between the ITO and WS2, the researchers could precisely control the “contact barrier” between the two materials. This barrier describes the energy that electrons need to gain to pass from one material to the other.

In this case, electrons in the WS2 layer cross the contact barrier as they absorb incoming photons, and jump between the semiconductor’s two “energy bands” – converting the material from an insulator to a conductor.

In the process, the electron leaves behind a positively charged “hole” in the semiconductor before spilling across to the conducting ITO electrode. This generates a voltage between both charge carriers, allowing electrical energy to be harvested from the solar panel.

Efficiency and transparency: With their manufacturing approach, Kato’s team drastically raised the height of the contact barrier compared with previous designs. This greatly increased the voltage between electrons in the ITO, and the holes they left behind in the semiconductor.

In turn, their alteration made the device over 1,000 times more effective at converting incoming light into electrical energy than existing ITO-based solar cells. All the same, the team’s choice of materials was far more transparent than previous designs: allowing some 79% of incoming light to pass straight through.

Following this demonstration, Kato and colleagues next explored how their solar cell could be fabricated on larger scales, while maintaining its high efficiency.

In previous ITO-based solar cells, expanding the material’s surface area led to a drop in voltage between the electron-hole pairs it generated. This lowered its ability to convert light into electricity. But by carefully adjusting the layout of electrical connections in their design, the researchers showed that a high performance could be maintained in solar cells as large as 1cm2 in area.

Transparent solar cells: Having already demonstrated such a drastic jump in both transparency and efficiency compared with previous designs, this new technology could be an important step forward in efforts to integrate solar panels into a wider array of existing technologies — hiding them in plain sight, essentially.

If the material becomes more commercially available in the future, Kato’s team believes it could one day enable a diverse range of electronic devices to harvest the Sun’s abundant energy, without any need to plug them into an external grid or power supply. 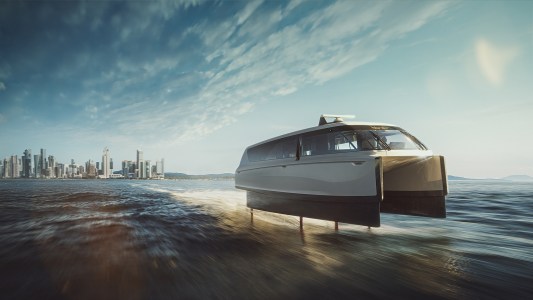 Transportation
You can ride this “flying” electric ferry in 2023
Subscribe to Freethink for more great stories
Subscription Center
Challenges
Video
Freethink
Subscribe
We focus on solutions: the smartest people, the biggest ideas, and the most ground breaking technology shaping our future.
Subscribe