Melissa Carney is a hard-working advocate for voting rights. She is constantly calling or mailing letters to local election officials, her secretary of state, or other personnel. But she never sent the most important piece of mail — her absentee ballot for the 2016 presidential election. Carney never even filled it out.

That’s because Carney is legally blind, and the entire process — from registering for an absentee ballot to filling it out — is inaccessible. At the time, away from her hometown as a college student, voting absentee was her only option.

Now Carney advocates in support of voting online or mobile phone voting, which she argues will making voting more accessible and enable more people to vote. But tech security experts argue that it isn’t ready — and may never be.

Bryan Finney is a self-proclaimed “political geek.” He was frustrated when the 2000 Gore/Bush election was decided by barely 500 votes out of over 100 million voters — especially when the “hanging chads” revealed a confusing and antiquated voting system.

“If we can’t elect our representatives on a secure and accessible system, then that’s a threat to our democracy. I figured, let’s go try to fix that,” he recalls thinking at the time.

When Washington state transitioned entirely to vote-by-mail in 2011, Finney launched Democracy Live to “make sure that the disenfranchised would be fully enfranchised” — including overseas military or the disabled. Since then, they’ve developed an electronic voting portal, called OmniBallot, that allows people to log in to print ballots and mail them in — and even submit them online, in some elections, in some places.

“There’s about 25 to 30 million (eligible) voters who can’t see, or hold and mark a ballot,” he says. “If you have a disability, and they mail you a paper ballot, and you’re blind, well, there’s not a whole lot you can do with that ballot.”

OmniBallot is a secure cloud-based web portal that voters can access from your cell phone, laptop, tablet — anywhere you have a web browser. Once logged in, voters can select candidates, then submit the ballot through the portal or print it and mail it in.

OmniBallot has been used by American voters (usually, military absentee voters) on every continent, and even in the middle of the Pacific Ocean. Finney hopes astronauts will someday use OmniBallot from the space station.

The portal works with most screen readers, software that translates text or images into speech or braille for blind users. The screen readers enable blind people to hear everything that sighted people see on the computer screen — allowing them to socialize on Facebook, shop on Amazon, surf the web, or make selections on a ballot.

Melissa Carney, who is a volunteer advocate for Democracy Live, has tested the system about a dozen times. She has even demonstrated it for other visually impaired people.

“It just amazes me how simple it is, even for someone who has basic screen reader and computer skills. It’s very easy, very straightforward to fill out,” she says.

In the last decade, over 15 states have used OmniBallot in almost 1,000 elections. Most of the jurisdictions in Washington state who employ the voting online system still require people to print their ballot and mail it in. But Finney believes that things will change because the next generation of voters is going to demand next-generation voting technology — their smartphones. He likens it to jurisdictions offering ballots in multiple languages, like Mandarin, Spanish, and English.

Sheila Nix, president of Tusk Philanthropies, an organization that advocates for web-based voting and mobile phone voting, says in addition to making voting accessible to disenfranchised groups, these platforms could increase voter turnout across all demographics — especially in smaller elections where turnout is low.

Nix says that recent elections that implemented new voting online technology, the voter turnout significantly increased. For example, the King County Conservation District Board of Supervisors election implemented Democracy Live’s OmniBallot and saw voter turnout almost double from the previous year (albeit from just about 3,000 votes to about 6,000). However, in small elections where turnout is generally small and the issues can vary in importance to the community, more examples are needed before drawing conclusions.

But when MIT published an analysis in February 2020 that identified security flaws in the app, states that had planned to use Voatz in upcoming elections began changing their mind, like West Virginia, which opted to use Democracy Live’s voting online system instead.

“We downloaded the app and (…) determined how it works, what it does for security,” says James Koppel, co-author of the MIT study. “We found many causes for concern, as well as several exploitable vulnerabilities, which allow things such as someone in the same coffee shop as you, if you vote with this app in a coffee shop, then anyone else in the coffee shop can get some information about how you voted.”

Voatz did not respond to our requests for comment.

By and large, the security community is united in saying that electronic voting isn’t secure enough for elections.

Finney is working it. He says he isn’t trying to rush things until they’ve thought through all the issues. So OmniBallot is currently limited to select states and a small group of eligible voters — including overseas military and disabled — people who might not otherwise be able to vote.

“From our standpoint, we are going to get there, but it’s important to do it responsibly,” he says. He doesn’t deny that, as with any new technology, there are growing pains.

Finney is working with the tech security and academic community to improve the technology. His online voting portal is currently going through additional security tests — because nothing is bulletproof. Systems can get hacked.

At the same time, he challenges critics to weigh the risks of voting online with the benefits. Some voters — like Carney, who couldn’t complete the absentee ballot on her own — cannot vote with the current system. Both Carney and Finney suggest that security hacks and disenfranchisement are each their own kind of risk to democracy: one shouldn’t outclass the other, they say.

David Dill, professor emeritus of computer science at Stanford University, is strongly opposed to mobile apps and voting online. He says that there is the potential for security breaches at multiple levels, like malware or the phone’s security. But the app itself is a showstopper because a private company typically writes it.

Carney raises a point that is widely held by proponents of electronic voting.

Online banking and credit cards do experience a certain amount of fraud. But, unlike election fraud, credit card fraud would only affect one person, or the subset of the American population that uses the compromised card (like when someone in another state once used my account to purchase used car parts — it didn’t impact all of America).

Banks anticipate some fraud and have built-in security measures, which they can adjust to prevent fraud. If banks increase their security, requiring credit card users to type in a verification code with each purchase, they might lose some credit card activity and revenue. So the banks evaluate the level of fraud they are willing to accept while still maintaining profit and usability.

In the same vein, having a few hacked votes but simultaneously enabling more people to vote is a tradeoff Dill could accept — if only it were measurable. But he says that is impossible with a secret ballot.

“That’s the scary thing about fraud with a secret ballot system. It could be that the election has been a hundred percent accurate, but you have no way of demonstrating it. And for elections, that’s a very bad thing because the legitimacy of election officials depends on the credibility of the election,” Dill says.

If there is one thing that Carney and Dill agree on, it is the importance of the “secret ballot.”

Carney didn’t even consider getting help from a trusted friend to fill out the absentee ballot for her because she says that would compromise her privacy and independence — something other voters don’t have to give up.

“I don’t feel like that was fair to me to not be in control of my own votes,” she says.

But Dill says that is the exact nature of the problem with mobile phone and online voting: it risks negating the secret ballot — which he says is critically important for the functioning of democracy.

I don’t feel like that was fair to me to not be in control of my own votes.

“You’re not supposed to be able to prove how you voted to a third party (entity). The reason for that is historically, there’s been a lot of coercion in elections — from everything, from just paying people to vote for a particular way to threatening to disappear them if they don’t vote the way you want,” he says.

Dill argues that even if technology developers could resolve all of the other security issues that arise, there would always be digital breadcrumbs that link a person to their vote. Comparing the security issues between baking and voting online doesn’t address this “secret ballot” issue. Even Democracy Live’s system currently sends the voter an email verification after placing their vote, giving them the option to print and mail in the completed ballot.

“The bank transactions have the names of everybody who’s involved in the transaction on them. And they’re stored in a lot of different places in the bank for reliability. And often they get printed on paper inside the bank. And so that wouldn’t work at all for voting because you don’t have the kind of ballot secrecy you need in a voting system,” Dill says.

Voting: A Luxury or a Right?

The right to vote appears more than any other right in the Constitution, appearing five times. Still, Carney says that, in reality, “voting is a luxury” that too many people don’t have access too.

“You can’t just ignore a marginalized group entirely and choose security over accessibility. I don’t think one should be chosen over the other. I think they’re both important issues that have to be addressed,” says Carney. “Just ignoring a marginalized group shouldn’t be the answer to addressing security.”

Carney would love to vote in the upcoming presidential election but is unsure she will be able to. Now, working from home, she has the option to vote in-person at an accessible voting booth. With the pandemic, like so many others, she is grappling with deciding whether or not to stay home on election day instead — therefore protecting the elderly family she lives with from possible exposure to the virus. But, unlike most everyone else, her decision doesn’t come with an alternative mail-in option.

The debate that pits accessibility against security slows the momentum for web-based or mobile phone voting. Although one thing is clear: people on both sides of the debate agree that an individual’s right to vote is a critical part of U.S. democracy — a common underlying motivation and something both groups are trying to protect in their own way. 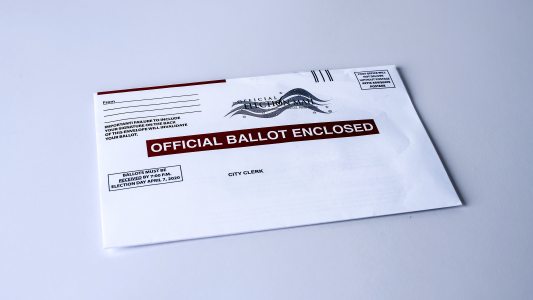 Democracy
You can now track your mail-in ballot like an Amazon package
Subscribe to Freethink for more great stories
Subscription Center
Challenges
Video
Freethink
Subscribe
We focus on solutions: the smartest people, the biggest ideas, and the most ground breaking technology shaping our future.
Subscribe