While visiting a friend at Walter Reed Medical Center, Ken Jones, an engineer, ran into  Erik Johnson, an Army occupational therapist. When Johnson heard Jones was a mechanical engineer, he had a request to make.

“He asked me if I knew anything about modifying game controllers,” Jones says. “He had been dealing with these very young, severely injured veterans,” many of whom were gamers looking for a way to play again. Could Jones make adaptive controllers to get that back in the game?

That “thing” is now Warfighter Engaged, a nonprofit that creates and modifies gaming devices for veterans — free of charge — including an important niche: adaptive controllers. (For what it’s worth, Jones says Marines tend to be PlayStation players, while the Army goes for Xbox — he isn’t sure why.)

Besides his engineering background, Jones is a gamer himself — although he isn’t as enamored of the first-person shooter games, like Halo or Call of Duty, as many of his veteran clients are.

He does understand the itch to play, though: the stress relief, the camaraderie, the sense of normalcy, the restoration of a hobby important in many people’s lives.

To that end, Jones cracks open controllers and creates customized ways to ensure they can play.

The process begins with a consultation. Since no two injuries and needs are exactly the same — and adaptive controllers need to be, well, adapted to their users — Jones first finds out what the veteran wants and what they are working with.

What type of game do they want to play? A big Madden fan, or a racing game enthusiast, may have different needs and layouts than someone who spends most of their time shooting.

What system are they playing on? Xbox controllers are easier to work with than Playstation’s, Jones says.

Game companies are developing more adaptive support, too. Xbox released an adaptive controller two years ago, designed with input from Jones and Warfighter Engaged. The Nintendo Switch has joined the party as well.

Then comes the most important part of adaptive controller design: the person. Jones has to take into account the injury — how much mobility do they have? What can they move? Is there nerve damage? What does the residual limb look like?

Answers in hand, Jones begins crafting the controllers. Common adaptations include adding levers to joysticks, to make them easier to operate and to add leverage for pressing down on them, and re-orienting buttons so that they are reachable — or mapping buttons and joysticks to larger interfaces, akin to controls on an old arcade cabinet.

“Everybody’s different,” Jones says. “There is no rulebook, there’s no reference manual. You learn as you go, and maybe you learn something from one guy that you can apply to another guy.”

The benefits of getting back to gaming are physical, mental, and emotional, says Kaitlyn Jones, an occupational therapist and project manager for the Xbox Gaming Accessibility Team — as well as Ken’s daughter and the previous tenant of the bedroom that’s now a 3D-printing workshop in the Jones’ home.

“Something that we learned … at the very beginning with our veterans was just how important gaming was to them before their injury,” Kaitlyn Jones, who was inspired to go into OT by seeing her father’s work, says.

Many were gamers before they were in the military, and being able to play while being deployed provided both escape and a way to connect with others — something we all appreciate a bit better now.

“Hey, I’m being thrown up through the air.”

John Peck was on his way to tell his sergeant that everything looked good on his end. The Marine had been on mine detection duty during a knock and greet patrol in Afghanistan’s Helmand Province; everything looked clear.

“I went to go tell him that, and the next thing I know, it’s like ‘hey, I’m being thrown up through the air,'” Peck says.

He became a triple amputee immediately, losing his right arm below the elbow and his legs below the knees. His left arm was there but had suffered a “degloving incident” — that is, the skin was flayed off.

The explosion wasn’t Peck’s only challenge, as a necrotizing fungus infected his thigh, abdominal muscles, and left bicep. Ultimately, he would lose that arm, too.

Since his first NES back in the day, Peck has been into video games, from Final Fantasy to Crash Bandicoot to Need for Speed.

He had other hobbies, as well; he could play Need for Speed, souping up his digital Nissan 350Z — or he could go outside and work on the one he owned in real life. He was a gym rat, and even while deployed didn’t fall in love with the shooters. He already dealt with his real rifle and mortar all day.

But as a quadruple amputee, it became more difficult to enjoy those other diversions. Peck now has arm transplants, but they are no panacea.

“I can’t use every muscle that’s in this dude’s arm(s),” Peck says. He can work out and cook, amazingly, but at a quarter of the capacity he used to have. Video games have taken on a more important role now as a way to manage stress and anxiety.

After meeting Jones at Walter Reed and getting an adaptive controller for his RC car, he became Jones’ first quad amputee case.

Peck’s rig essentially opens up the controller, repositioning it in ways he can reach. Due to a lack of single digit control, Peck can’t use the all-important thumb and index fingers to manipulate a controller.

The d-pad and buttons are instead mapped to a delightfully retro-looking joystick, replete with a big red ball on top, and buttons that look ready for OG Street Fighter.

The joysticks are manipulated by his wrists; leg paddles, two “bite switches,” and a “sip-and-puff” (which performs different functions based on whether he makes a sipping motion or blows into it) complete the rig.

Not only does being able to game help Peck keep stress and anxiety at bay, but it’s had physical benefits as well.

“It has enabled me to sit up in my chair for a lot longer,” Peck says, improving his core stability as his abdominal and back muscles strengthened. He credits gaming with helping to build shoulder strength, as well.

“We’ve seen patients who went from being able to stand or tolerate an activity like, for two minutes one day, to 20 minutes the next day, because they’re playing a video game.”

Starting with LEGO Batman — or Star Wars; he doesn’t fully remember — Peck is now in full adventure mode, slicing through samurai epic Ghost of Tsushima, scavenging the Borderlands, and hacking it up in Watch Dogs. Assassin’s Creed is downloading as we speak. 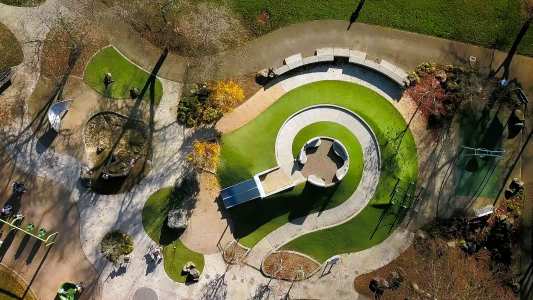 One father in Portland, Oregon is helping design the parks of the future with inclusive playground equipment that makes play accessible to all.

Accessibility
Playgrounds are boring. Here’s how to make them fun again
5:45
By Doug Dais
Subscribe to Freethink for more great stories
Subscription Center
Sections
Video
Freethink
Subscribe
We focus on solutions: the smartest people, the biggest ideas, and the most ground breaking technology shaping our future.
Subscribe