Neon green cables dance and curve in the Dutch night, pulled about by distant kites flying in the breeze. As they tug at their cables, the devices — dubbed Windvogel — are generating clean electricity. The goal is a power source as poetic as environmental consciousness.

Daan Roosegaarde’s entire practice is centered around the beauty of living with nature and removing pollution from urban life. The Dutch designer and architect combines the influences of the natural world around him with modern design in an effort to not only enrich but engage.

From towers that create pockets of clean air to a luminescent bike path that glows like children’s ceiling stars and windmills drawing lines of light across the sky, Roosegaarde’s works aim to merge nature and design into something sublime.

Daan Roosegaarde’s vision for a sustainable urban future becomes more pressing with every passing day, with each rise in temperature and sea level. Freethink spoke with Roosegaarde about pollution, the secret to getting government buy-in, and the Dutch concept of Schoonheid.

Freethink: What does Schoonheid mean, and how does it drive your design philosophy?

Daan Roosegaarde: Schoonheid is a typical Dutch word which has two meanings: “cleanliness” as in clean air, clean water, clean energy, and clean space but it also means “beautiful” as in sublime aesthetics and creativity.

For us, Schoonheid shines light on both dimensions and calls for its recognition as a fundamental condition in urban environments. We are all makers, not consumers. We should be part of the solution, instead of the problem.

Freethink: What project of yours has had the biggest impact on the environment and how so?

Daan Roosegaarde: There is this book called Drawdown (edited) by Paul Hawken, where you can find around 150 inventions to reverse climate change. Everything is there in the book, but we are not implementing it — why?

At the Studio we make projects that show that something could be done right now, showing the beauty of a new world. The key is about making new connections and making them contemporary again. Often, sustainability has been defined as doing less — fewer cars, less flying. I prefer to do more, not less.

All our projects are possible prototypes for the cities of tomorrow. Whether it is our Smog Free Project (a campaign against air pollution); Gates of Light (reusing energy that is all around us); or Space Waste Lab — a multiyear living lab with the European Space Agency to capture space waste and upcycle it into sustainable products.

This is what creates an impact: they are here today for you to see.

Freethink: The Van Gogh Path is part of Smart Highway, which looks to create interactive and sustainable roads. How does this work? What are the particular challenges of working with such a crucial aspect of infrastructure?

Daan Roosegaarde: Do you remember the little stars that stuck on the wall lighting up at night when you were a kid? Van Gogh Path works like that: a light-emitting bicycle path which charges at daytime and glows at night, inspired by Vincent van Gogh’s Starry Night.

The path makes use of these light-emitting techniques which are part of Smart Highway, interactive and sustainable roads of tomorrow, in collaboration with Heijmans Infrastructure. Its goal is to make smart roads by using light, energy, and information that interact with the traffic situation.

An interplay of light and poetry, where cultural heritage and innovation merge in a new public landscape. Connecting something new to shared memory is essential in order to be understood, to convince investors and institutions before starting the project.

Freethink: What’s the biggest challenge of balancing your environmental ambitions with aesthetics?

Daan Roosegaarde: I make these projects to make the world more understandable for myself. I look outside the window, and I don’t understand the world anymore. I see air pollution, CO2 problems, a rising sea level, traffic jams, streetlights burning the whole night with nobody there. All these don’t make sense to me.

With problems like this, you have two options: you can sit in a room crying, blaming others, or you can try to design and engineer your way out of it — try to at least improve, if not to solve the issue. The projects we do are a way for me to understand what is happening in the world and to better connect with what is around me.

Freethink: To make these ideas a reality, you have to work with the municipalities. What’s the hardest part about getting the local governments on board with experimenting in new designs? How have you been successful in this endeavor?

Daan Roosegaarde: The most important aspect is that you take your clients, governments, ministers, and pull them into the story, make them part of it. Don’t only speak about the project, show them that it is working — make it visual, build prototypes.

Although the idea for the Smog Free Tower started in Beijing, the project was developed in Rotterdam, where we first constructed the prototype. We needed it to convince China’s central government, so we used Rotterdam as a pilot, to test, to learn, to make mistakes, and to upgrade.

Collaboration with governments is necessary to realize long-term clean air improvements by implementing green energy solutions. However, the problem of air pollution is urgent and calls for immediate action. Schoonheid contributes to action by accelerating the process, by taking a bottom-up approach — sparking conversations and endorsing new ideas to be tested.

Freethink: What do you foresee as the future of city design?

Daan Roosegaarde: I think we live in a world where there is not a lack of technology but of imagination. (Imagine) how we want the future to look like. And if we can’t imagine the future, we won’t get there. That is why we are stuck right now, because we are afraid of the unknown. That is why projects such as Waterlicht or Smog Free Project are there, to visualize and activate people about our changing world and become part of the solution.

These projects are prototypes for the city of tomorrow: they are proposals for how I would like to see the world. Not as a utopia, but as a protopia (term by Kevin Kelly, referring to a future with as many new problems as benefits, a more realistic vision to strive for): to show, to learn, to fail, and to upgrade the world around us. 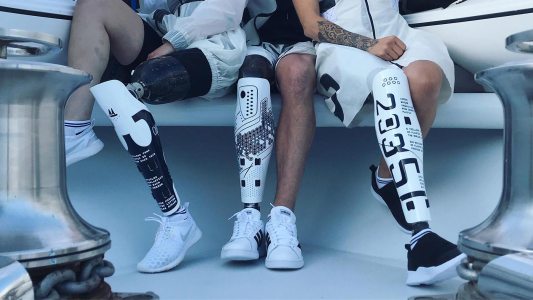 Alleles is a premier boutique where amputees can be fitted for fashionable limb covers that make their prosthetic limbs stylish and eye-catching. These designers hope their fashions will help reduce the stigma that comes with prosthetics.