Beneath the waters of Biscayne National Park in South Florida sits the coral-crusted remains of what may be a slave ship.

“To the naked eye, it wouldn’t look like a site at all,” says Ernie Franklin, an instructor for Diving With a Purpose (DWP), a group that provides training, certification, and field experience in underwater archeology — particularly, submerged sites connected to slavery and the African Diaspora.

But they face a challenging foe: “Mother nature has a way of taking back her stuff.”

But these ships represent a major challenge to African-American genealogy, a brick wall in the family history.

Franklin and DWP are in a race against microbes, storms, and the whims of sea and time to identify and document these ghoulish remnants of our past — memorials, graves, and reminders of the transatlantic slave trade.

Their mission is getting noticed; the Washington Post, National Geographic, and the Epix series “Enslaved,” hosted by Samuel L. Jackson, have all covered their efforts.

What DWP and its youth wing are documenting in Biscayne are likely the remains of the Guerrero, a slave ship that was reefed off the coast of Florida while battling the British warship HMS Nimble. Divers trained by the group have also teamed up with Ambassadors of the Sea, a Costa Rican diving non-profit, to survey the likely remains of a Danish slave ship off the country’s coast.

There are historical records of roughly 1,000 slave ship wrecks, says Daniel Domingues da Silva, an assistant professor of African History at Rice and co-manager of Voyages: The Trans-Atlantic Slave Trade Database. Those 1,000 “really should be regarded as a lower estimate,” da Silva says.

Finding them in old documents is one thing; finding them beneath the waves is another matter entirely.

Sinking in warm  waters, subject to the currents and storms that afflict all shipwrecks, the remains are difficult to locate and difficult to definitively identify as slave ships — especially those covertly running the British blockade after transatlantic slave trade was made illegal.

In short, we need as many marine archeologists as we can get.

Diving into the Past

That’s where Youth Diving With a Purpose, the group’s youth arm, comes in. Franklin also works as the education coordinator for the youth program, which introduces the principles of maritime archeology — along with a program for coral reef conservation — to young divers aged 16 to 23.

Youth DWP doesn’t teach diving; kids come certified and with a few dives under their belts. Instead, over the course of a week, it teaches the principle skills of archeology, first on dry land and then deploying them underwater.

A mock wreck site is assembled on land, Franklin explains, where divers learn to draw a base line (used to locate all the finds around the wreck), form a grid, take precise measurements, and make scale drawings of artifacts. After their terrestrial crash course, they hit the seas, and by the end of the week, they have tangible evidence of their contribution: a slice of seafloor map, a small section of the brick wall chipped away.

Rachel Stewart, a member of the first youth class and now a DWP instructor, would never pass up an opportunity to dive, but the mission just added to her enthusiasm. “I loved doing the work. Diving with a purpose, doing something underwater, really kept bringing me back.”

It’s a painstaking process, drawn out by the complications of underwater communication and the Atlantic’s seemingly active efforts to devour and scatter their targets. It takes years to document a shipwreck — so all the more reason to prep the next generation and ensure the history they shepherd is their history.

“We’ll tell the kids, ‘History is told by the last person standing on it,'” Franklin says. “So, would you rather you do the research and get down there, so that you can tell the story? Or would you rather have somebody else telling your story? And most of the time, it’s ‘No, no, no — nobody else can tell it.'”

“My hope is these kids understand, and keep it going”

As a lifeguard for the Detroit YMCA system in the mid-sixties, Franklin remembers a recurring mystery that afflicted their diving instructors. Employees would return to work on a Monday morning, only to find the air tanks for the scuba classes drained.

Had they bothered to ask young Ernie Franklin, they’d have figured it out.

“At that time, back in the old days, scuba diving wasn’t something an African-American kid … was exposed to,” Franklin says. “The thought never came across anybody else’s mind.”

Franklin provided surface safety support during dive classes. But he longed to be part of that world beneath him, so close, yet so alien. He was told it just wasn’t possible: bones too dense, lung capacity too small, a litany of nonsensical excuses, especially for a lifeguard.

Of course, his physiology had nothing to do with it.

“It was straight-up racist.”

From above, Franklin listened hard and watched closely. As a pool boy and locker room attendant, he had keys to everything — including where the tanks were locked up. On the weekends, Franklin and some friends would grab gear and tanks and practice what they had seen.

“They really couldn’t understand why every weekend they came back, the tanks were empty,” Franklin says. “It did not fathom to them that we had been doing it, because, you know, we just ‘couldn’t’ do it.”

Today, in the spectral gloam of the Atlantic, watching his young DWP cohort hover around a ship’s grave, Franklin thinks about the difference between his path and theirs.

“I take it as a privilege,” Franklin says. “To be able to have gone through all this stuff, and to be able to provide this opportunity to these kids. Looking at them … and thinking back when I was their age, I knew that I was gonna do this, it was just that the path to it came with a lot more twists and turns.”

Youth Diving With a Purpose members are the future revealers and chroniclers of a dark past that still scores the future.

“To think about where I’ve come from, so that they can be where they are? It was all worth it,” Franklin says. “And my hope is these kids understand and keep it going, because of the effort that was put before.” 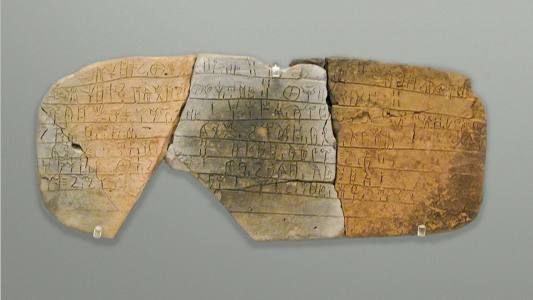 An algorithm that can identify the closest living relatives of lost languages could help linguists unlock the meaning of ancient texts.

Languages
Bringing lost languages back to life with AI
By Kristin Houser
Subscribe to Freethink for more great stories
Subscription Center
Sections
Video
Freethink
Subscribe
We focus on solutions: the smartest people, the biggest ideas, and the most ground breaking technology shaping our future.
Subscribe