In what sounds like a fantasy fulfilled, remotely operated electric flying car races are set to begin in 2021 — with pilots taking to the skies in 2022.

Australian-based Airspeeder and Alauda Aerodynamics announced that the forthcoming international series — beginning after final, closed-door preseason tests — will feature the un-piloted version of its electric vertical take off and landing (eVTOL) racers.

Called the Mk3, the electric flying cars’ x-formation rotors help them hit speeds in excess of 120 kph (75 mph) and are capable of tight, high-speed maneuverability.

When Freethink spoke with Airspeeder founder Matt Pearson this past August, the company was in the process of testing the Mk3 over the desolate landscape of South Australia, and the next step was “showing the world what a race will look like.”

“Where we’re going to start, our main goal is circuit racing in remote, really iconic, beautiful locations” Pearson said. The details of the schedule will be released later this month, ESPN reports.

Per Airspeeder’s release, a full racing grid of 10 Mk3s are currently under construction, to be shipped to racing teams this year. The aircraft were created, Autocar reports, by engineers plucked from companies deeply associated with racing, including Brabham, McLaren, Jaguar Land Rover, and Rolls-Royce.

Circuits in the Sky

Airspeeder’s electric flying cars seem like spiritual successors to the racers that ripped through gilded Monte Carlo in the 1960s, powered by rotors laid out in a “octopus x formation.”

An array of LiDAR and radar sensors serve as safety measures, creating something like a virtual force-field around the electric flying cars — meant to prevent them from running into each other.

Ensuring this system works will be at the heart of pushing the sport forward. When pilots take to the skies, hopefully in 2022, it won’t be solitary aircraft racing against the clock; Pearson envisions simultaneous races, with many pilots in the sky going prop-to-prop.

Placed like wheels around the Mk3’s monocoque (the single-piece body of the racer) and armed with top and bottom propellers, the engines provide stability, as well as handling capable of sharp maneuvers, which they boldly compare to a Formula 1 car’s.

That layout separates the Mk3 — and the future, piloted Mk4 — from current sky racers, which are essentially high-performance prop planes. These fixed-wing planes necessitate broad, sweeping corners in their courses.

Those turns can be taken in a multicopter eVTOL as well, Pearson said, but “because you have so much control, you can take very, very tight corners, and bring your speed right down for a hairpin turn, and then accelerate down the straight.”

Pearson said Airspeeder could theoretically replicate a Grand Prix circuit in midair; imagine, say, the sweeping chicanes of the U.K.’s famed Silverstone Circuit, or the brutally fast straights and cobra-strike S-bends of Italy’s “Temple of Speed.”

“That’s how you begin to see it as motorsport in the sky, rather than another airsport.”

The Mk3 season will serve as an important data-gathering exercise for the piloted Mk4 races, slated to begin in 2022. In addition to safety information, Airspeeder will use the remote-operated racers to gather information on vehicle dynamics and performance, as well as the powertrain (essentially, all the pieces directly involved in making the electric flying car fly).

More ambitious than setting up their future motorsport, however, is Pearson’s intention to push the broader technology of eVTOLs forward.

“Competition drives progress and our racing series is hastening the arrival of technology that’ll transform clean-air passenger transport, logistics, and even advanced air mobility for medical applications,” Pearson said in the release.

Motorsports pushed the evolution of ground cars, too.

Those paddle shifters ubiquitous on modern manuals trace their origins back to Formula 1, debuting in 1989 in the Ferrari 640, while systems developed in 2009 to harness the kinetic power of brakes can now be found in hybrid cars and busses. (And never mind the pure performance leaps in engines and tires, when every fraction of a second can cost millions!)

For eVTOLS, whether for aerial ride sharing or the checkered flag, a key limiter of both performance and accessibility will be their batteries. Even something so seemingly simple as swapping out batteries can be a tricky task; all-electric Formula E racers initially just straight-up swapped cars.

The Mk3 will have a “slide and lock” system for easier battery removal, allowing Airspeeder to build pit stops into their races — and perhaps eventually portable power units for your EV or Uber Air.

Competition pushes not only performance but safety forward, Pearson said, and Airspeeder intends to “turbocharge” that advancement for electric flying cars.

Cars
On the road to autonomous cars, driver fatigue will be a problem
New research from Waymo points the way to overcoming driver fatigue in cars that are almost — but not quite — self-driving. 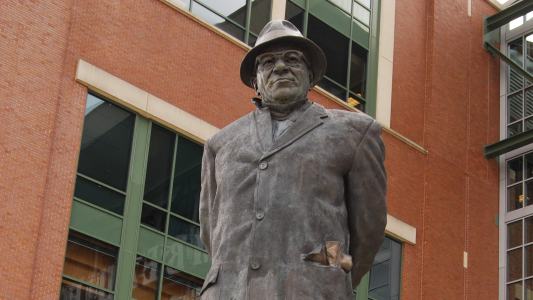 Using face-swapping AI, the NFL has created a Super Bowl ad in which iconic coach Vince Lombardi delivers a message of unity 50 years after his death.