Stephanie Azzaline’s basically summed it up, the group agrees; their natural anxiety relief.

All four of them are sitting in what is easily recognizable as a classroom, in a building which feels a lot like a mixed-use college campus. But we’re at Second City, Cathedral of Improv, a massive space with an airy glass atrium, where the lonely chair of the performance stage serves as an icon.

But Azzaline and her fellow students aren’t here just to chase dreams of making others laugh or acquire a red flag for Tinder profiles — they are participants in Second City’s Improv for Anxiety course.

A combination of group therapy sessions on Tuesdays and improv classes on Sundays, the course aims to deliver a natural remedy for anxiety’s debilitating effects through the same games which made Whose Line is it Anyway? hilarious (here, the points do matter).

“There were a lot of people who had anxiety, and they could really see the benefits of how improv could be really helpful for those that were struggling with anxiety,” says Becca Barish, head of the wellness program at Second City. Those anecdotes of improv’s potential for natural anxiety relief have some scientific backup.

A pilot study in the Journal of Mental Health by researchers in the Department of Psychiatry at Cook County Health and Hospital System and the Illinois Institute of Technology concluded that “a brief intervention based on improv exercises may provide a strong and efficient treatment for patients with anxiety and depression.”

But asking people with anxiety — including severe anxiety — to parachute into a drop-in class or sign up for a normal course can be overwhelming. “If I’m here for anxiety but no one else in the room has anxiety, what would that experience be like?” Barish says.

This class was unique because all of us already raised our hands and said ‘Yo. Anxious. Right here.’

Knowing everyone else in class is there seeking their own natural remedy for anxiety is a relief, the students say, and an important part of getting them comfortable enough to participate. “This class was unique because all of us already raised our hands and said ‘Yo. Anxious. Right here,'” says Erin Wright, another participant. The walls were already down.

There was no fear that their anxiety would not be believed — a common and painful experience — or that they were just “nervous,” or that since they were not quivering, with their chest heaving like bellows, they must not really be anxious. Combined with the judgement-free, say-anything-as-long-as-its-something spirit of improv, the classes allowed them to focus on being in the moment and building a rapport with their classmates.

Improv only exists in the moment. There is little to no time for fretting and strategizing, mistakes are left dead in your wake, and for every time you fall flat, there’s another where you slay. Forcing the mind to stick to the present is perhaps the single most beneficial thing Improv for Anxiety can impart, the key to its potential for natural anxiety relief.

Improv games can hone the ability to remain in the present. Providing only one word to continue a sentence, for example, or jumping in with one line to build a scene, or having to start a response with the last word someone else says, all require concentration and spontaneity. Essentially, to perform in improv, you need to be out of your head.

“Being present is so hugely important,” says Linnea Frye, the group’s instructor. If you cannot be present with your scene partner, it is impossible to create a good scene.

The classes also form a support network, the students say. Group texts allow them to share their highs and lows; everyone cheers each other’s successes and bolsters each other’s spirits. The group therapy sessions, which are required for the introductory Improv for Anxiety class, give them insights into their anxieties and teach them coping skills.

“We worked on exposures in our group therapy,” Hastings says. She was terrified at the prospect of walking down the aisle, eyes and smiles on her, for her then-upcoming wedding.

“They made a mock wedding for me,” she says. “I had to stand outside for like five minutes — it was probably 30 seconds — while they got it ready, and I was like sweating. And then I came in and I had to walk in silence, and that was my exposure.”

It worked — during her real procession, Hastings was able to enjoy the happy faces lining her way.

Anxiety is a chronic affliction, not cured so much as managed. While the Second City participants all still struggle — one confessed experiencing anxiety in the interview, like right now, she told me — they have also all noticed a difference in their lives. Hastings deeply feared the walk down the aisle; she made it. Erin Wright deadpans that she is roughly 30% happier, but she has recently navigated a break-up without breaking up and simply has an easier time living day to day.

Lydia Atwell, the quietest member of the interview group, left for her next session with a piece of advice for others seeking natural anxiety relief.

“If anyone is thinking about doing this, and they’re not sure if it’s going to work or be worthwhile, I say definitely try it.” 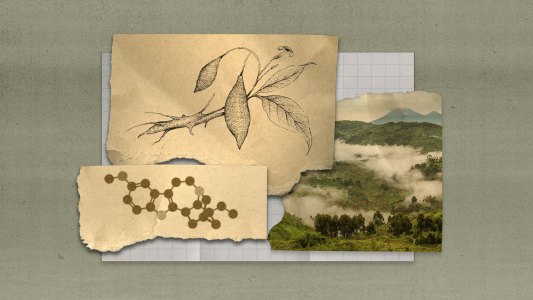 Ibogaine, an African psychedelic drug which comes from the iboga plant, is used for both religious rites and drug addiction treatment.