Artist Michael Winkelmann, also known as Beeple, creates hilarious, thought-provoking, and sometimes vulgar images that often exist solely as pixels on a screen. As a digital artist, it can sometimes be tough to pay the bills.

But last December, Beeple sold $3.5 million worth of art in one weekend.

And he’s not the only artist to experience this windfall — digital artwork is a hot commodity right now. It’s being sold for millions of dollars thanks to a unique type of crypto asset, called non-fungible tokens (NFTs).

NFTs are creating a brand new, albeit speculative, marketplace for digital content. In a world where digital files are often thought of as cheap, proponents say this is a huge opportunity for digital creators to sell their own work.

But these digital tokens act as a way of minting a piece of original content or collectible goods — usually digital animations, images, or videos, but NFTs can represent physical objects too.

NFTs act as an artist’s “digital signature” — much like Picasso’s signature can be used to verify the authenticity of his paintings.

The token is stored in blockchain technology — the same kind of decentralized ledger used by cryptocurrencies, like bitcoin.

This blockchain verification, combined with the nonfungible characteristic of these tokens, creates scarcity in the marketplace.

Cryptocurrencies and traditional currencies (like the US dollar) are fungible — meaning, each piece of currency is interchangeable and can be subdivided into smaller fractions. For example, my $1 USD is worth the same as your $1 USD, and both of our dollars are worth 100 pennies.

This isn’t the case with NFTs. Since they are nonfungible, no two tokens are ever identical, and they cannot be subdivided.

“I use the example of a physical trading card,” Ryoma Ito, head of marketing at a crypto art marketplace called MakersPlace, told Forbes.

“They’re accessible by the millions, but when, say, Steph Curry comes along and autographs one of those cards it will increase the value as long as there’s a way to authenticate that signature. When a creator publishes to blockchain, they’re permanently associating their signature with that piece. It’s just a digital signature rather than a physical autograph.”

Since these tokens live on the blockchain (mostly, the Ethereum platform), they are backed by contracts that are written into the blockchain. Whatever terms the creator sets in the initial contract will be executed automatically. These contracts also automatically update to show the current owner of the NFT — each time a token changes hands, that exchange gets reflected in the contract.

This blockchain verification creates scarcity in the marketplace.

What’s more, these smart contracts can allow artists to see financial gains if their work appreciates in value over the years. This usually isn’t possible with traditional art collectibles — after the initial sale, the artist won’t financially benefit if their artwork suddenly becomes much more valuable in later years. But with a smart contract, digital artists can claim a certain percentage (usually between 2 and 10%) of each subsequent sale for years to come.

“NFTs are the single biggest reorientation of power and control back into the hands of the artist basically since the Renaissance and the printing press,” Robert Alice, a digital artist in London told Forbes. He’s also seen the financial benefits of NFTs.

“It appeals to people who have built up their own audiences — maybe on social media — to go and sell work directly to their audience.”

The sales usually happen on platforms like Nifty Gateway, Foundation, and SuperRare.

Why Buy an NFT?

Tokens symbolize ownership. But you can still download a piece of Beeple’s artwork from his social media or take a screenshot of it for free. So why shell out thousands of dollars for an NFT when you have no way to control the actual item itself?

While anyone can download or take a screenshot of the file, theoretically their copy won’t have the same value as the original backed by an NFT.

And for most collectors, ownership is the point — that’s why some NFT platforms act as a digital gallery where people can display their purchases for everyone to see.

“Anyone can see pictures on the internet of the most expensive artworks; posters are sold in museums,” Vincent Harrison, a New York gallerist told Wired.

NFTs are revolutionizing other markets, too — any collectible items, such as sports trading cards, virtual sneakers, and even virtual real estate, can be represented by an NFT. The NBA even created token-backed collectible video clips that can be traded online.

NFTs are new and exciting — but will they become the next big thing or go the way of Beanie Babies? It’s too early to say, but if NFTs are going to become mainstream, there’s still a lot of issues to work out.

According to Fortune, however, there are some workarounds to this. Some artists are starting to use a decentralized internet called the Interplanetary File System (IPFS) to host their artwork. This system is similar to BitTorrent, in that the digital files are stored on many different computers around the world, instead of on one centralized server.

Blockchain
Can we get blockchains to talk to each other?
Blockchains do more than crypto; logistics, contracts, and more use the tech. But there’s a problem: blockchain communication is still difficult.

AI
AI artist Botto has made its first million
AI artist Botto, which hones its taste via a human community, has made a splash in the art market, going from NFTs to Miami.

Blockchain
Fashion, art, and games: here’s what a decentralized metaverse could mean
The idea of the metaverse has gone from the realm of science fiction to the latest business model of major companies from Facebook to Nike.
Up Next 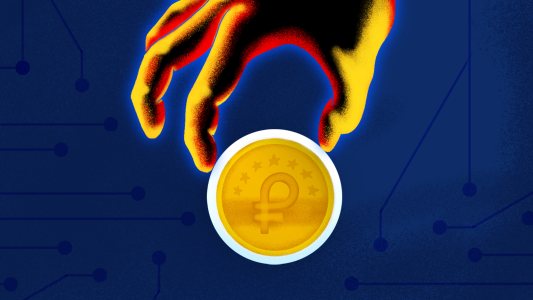