Nathan Myhrvold spent the 1980s and ‘90s conducting cosmology research with Stephen Hawking — and serving as tech giant Microsoft’s first-ever CTO. After retiring, he went on to write award-winning cookbooks and publish scientific papers about dinosaurs.

Now, he takes pictures of snowflakes.

The path to these stunning photographs began in 2018, when Myhrvold — inspired by Kenneth G. Libbrecht, a Caltech physics professor who’d spent decades researching the science behind snowflake formation — decided he wanted to take his own snowflake photos.

In true Type A fashion, he then spent 18 months combining a camera and a microscope into a system capable of capturing the world’s highest resolution pictures of snowflakes.

Every aspect of Myhrvold’s system is optimized to take snowflake photos.

Because a metal housing would expand and contract as he moved the system between the indoors and outdoors, affecting his ability to focus the microscope, he went with a more stable carbon fiber frame.

To delay melting, Myhrvold added a cooling system and opted to use a slide made of sapphire rather than glass, as the latter more readily retains heat. He even searched the globe for the perfect flash.

“Light could melt the snowflake, so I found a company in Japan that makes LED lights for industrial purposes,” he told Smithsonian Magazine. “My camera’s flash is one-millionth of a second and a thousand times faster than that of a typical camera flash.”

Once he had his perfect camera system, Myhrvold set out to find the perfect snowflakes, leaving his homebase in the relatively warm Pacific Northwest for sites in Alaska and Canada.

“For these photos, temperature was the main factor for determining location in addition to considering wind, moisture, and humidity,” Myhrvold told My Modern Met.

“When it is warmer, the snowflakes tend to clump, and when it is colder, they tend to dry out,” he added. “Some of the best snowflakes that I found were at temperatures between -15°F and -20°F.”

Once on location, Myhrvold would allow snowflakes to fall on a piece of black foam board. He’d then identify the most promising specimens and use a paintbrush to delicately transfer them to his sapphire slide.

Myhrvold would then carefully focus his microscope on the snowflake before photographing it, taking, on average, more than a hundred photos of each flake. He could then use a computer program to combine multiple photos into a single, highly detailed picture.

“You have to take many photos in order to get a high enough resolution, because many photos put together allows you to have enough depth of field to see an entire snowflake very sharply,” he told Smithsonian.

Myhrvold sells prints of his pictures of snowflakes through his art gallery, and as of 2021, he was still modifying his camera setup to include new features. Eventually, he’d like to try making 3D replicas of the 2D images.

“There’s currently no [3D] printer that could print at the resolution of a real snowflake,” he told Smithsonian. “But if you increased it to the size of a dinner plate, absolutely.” 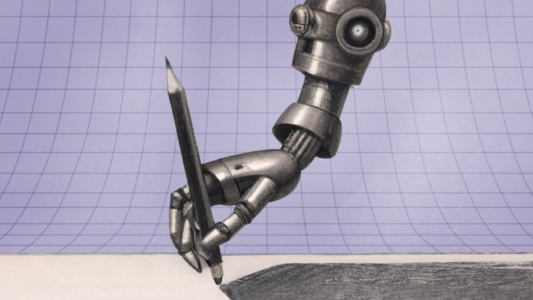 It’s made headlines so often that there is no question that 2022 will be remembered as the year that Generative AI stunned the world.

AI
Generative AI: The technology of the year for 2022
By Louis Rosenberg
Subscribe to Freethink for more great stories
Subscription Center
Sections
Video
Freethink
Subscribe
We focus on solutions: the smartest people, the biggest ideas, and the most ground breaking technology shaping our future.
Subscribe