Next year, you might sit down to sushi or a poke bowl full of what looks and tastes like raw tuna — but is actually an alternative made from plants.

This month, cell-cultured seafood maker Finless Foods announced that it would launch a plant-based raw tuna substitute, which is slated to roll out in foodservice channels in early 2022.

Finless isn’t sharing the details of its secret sauce — er, protein — but co-founder Mike Selden has said it does not involve an extruded soy or pea base, common in many other alternative meat and seafood products.

“It’s made from nine whole, plant-based ingredients that are cooked and seasoned to mimic the taste and texture of tuna,” Selden told FoodNavigator-USA. “We never went down the extrusion route as it doesn’t lend itself very well to raw fish.”

He added that the base of the product is in the melon family, which will make it easy to scale and buy from typical distributors.

A pleasant surprise: Finless has made its name on the promise of cell-cultured seafood, or seafood grown from fish cells in a lab. Selden acknowledges that a plant-based offering is somewhat different, but emerged as a sort of happy accident during the development process.

“We were growing Bluefin tuna cells, and we were testing a bunch of different scaffolds as we wanted to see which one the cells would attach to, but also which ones give you the best sensory experience,” Selden said.

“We combined some of our media ingredients with stuff we bought at the grocery store, and realized we had a really good product that was made entirely out of plants.”

The market: Brands like Beyond Meat and Impossible Foods have proven out a mainstream appetite for plant-based meat alternatives, in particular when substituting for ground and processed products.

Finless is still working on cell-cultured offerings to create food that Selden believes can more accurately recreate the experience of eating whole muscle. He expects its first cell-cultured product to be sashimi, optimistically launching in 2022.

Taste over matter: Plant-based tuna is categorically different than cell-cultured tuna, but Selden believes there is an audience that predominantly cares about taste, and is less concerned about what method was used to create the meat alternative.

The forthcoming plant-based option is a way for Finless to begin buildinga community around their alternative seafood line, and to better learn about their preferences and tastes, serving the overall goal of shifting from traditional seafood.

Food
The future of meat is sustainable — and a little weird
Ideas to reduce the meat industry’s impact on the environment include 3D-printed steaks, cultivated tiger meat, and potty-trained cows. 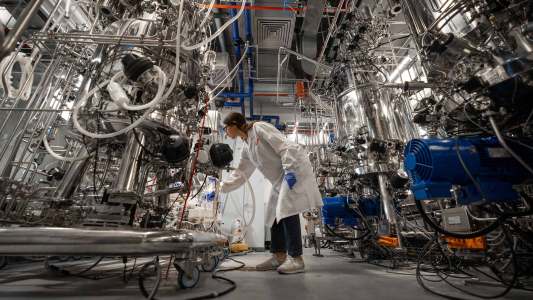 Food
Cultured meat is now being mass-produced In Israel
Subscribe to Freethink for more great stories
Subscription Center
Challenges
Video
Freethink
Subscribe
We focus on solutions: the smartest people, the biggest ideas, and the most ground breaking technology shaping our future.
Subscribe