“Problems are inevitable. Misery is a choice.” ― Ann Landers

From the Taliban takeover of Afghanistan to the rise of Omicron, from stagflation to strained global supply chains, the mainstream media is all too eager to sell you an apocalypse-themed New Year.

But despite what the news would have you believe and despite some very real problems, civilization has made impressive progress to rebound after the pandemic and towards building a better and brighter future in 2022.

The reason that we see bottlenecks throughout the global economy is not that supply chains are collapsing, but that they are adapting to higher demand. According to the World Trade Organization’s preliminary data, global trade volume is now higher than before the pandemic.

We still struggle with new covid waves, but people and businesses have adapted behavior and technology so that covid restrictions only have one third of the impact on GDP that they did in the spring of 2020.

While the last 24 months may well have felt like a considerable check in the greater positive trend of human progress, if we pan back to view the wider scope of data over the last 24 years, the trajectory is better and brighter than you might have expected.

Since 1998, average global life expectancy grew by nearly seven years through 2019 (the last year of data available), while global GDP per capita rose by over 50%, even counting the 2020 recession. This means that a third of the increase in standard of living that human beings have ever attained – measured as income per person – was achieved in the last 24 years.

Extreme poverty decreased faster than ever, from 30% in 1998 to below 10%. On average — for two and a half decades — over 120,000 people have escaped extreme poverty not annually, or even monthly, but daily. While 2020 saw a rise in the number of people living in extreme poverty, the trend began to decline again in 2021, according to the World Bank.

Since 1998, global child mortality — the share of children who die before the age of five — was reduced by over half, from over 8% each year to below 4%. There are more children living today than ever, and yet five million fewer children die each year. And, according to UNICEF, child mortality continued to decline through 2020.

The proportion of the population with access to meaningful electricity jumped from 72.6% in 1998 to over 90% by 2019, while outdoor and indoor air pollution-related deaths fell by more than a million annually through 2017.

When you zoom out, the overall trend of human progress is unmistakably positive.

That’s not to say there weren’t setbacks and reversals — indeed, the last 24 months have been just such a setback. But the overall direction is abundantly clear. Over the last two and a half decades, most people, in most places, have been living longer, healthier, safer, better fed and watered, more educated, connected, fulfilling, prosperous, abundant, and happier lives.

We tend to view progress, or what went right, through the strict lens of ongoing perpetual improvement. We see progress most clearly when we can contrast our current situation as being better than the previous weeks and months, but rarely decades and centuries.

But it’s not just what went right that’s cause for celebration, but also what didn’t go wrong.

We must add to our total account the hidden progress of mitigated losses – a pandemic greatly diminished because of a faster response to a new disease than humanity has ever managed before. The good news being that we’re coming out of the storm of 2021 and into 2022 more intact than most predicted in March 2020 or even on New Year’s Eve 2020.

The story of the pandemic has been one of disease and death, but also one of perseverance, scientific and technological progress, and collaborative global effort. Civilization pushed through an immensely challenging scientific, economic, logistical, and cultural hurdle, and has largely succeeded.

In just the last 12 months, mankind has developed, manufactured, and administered almost nine billion doses of vaccines, and in so doing, likely saved millions of lives. The distribution suffers from glaring inequities and has (so far) largely passed very low-income countries by.

But that does not lessen the achievement of administering some 37 million doses of vaccine around the world every day this year – a challenge described by a logistics expert as “the equivalent of every iPhone, Galaxy and PlayStation launch all at the same time.”

To deliver shots in arms within a year of even having heard of a new virus is an unprecedented feat in itself, but even more important for our future is the mastery of the new mRNA vaccine technology. Because of this proof of concept, it looks increasingly like we are on the threshold of a medical revolution.

Viruses are successful because they hijack our cells and get them to produce the materials to make more viruses. With mRNA, we have snatched the viruses’ best idea. It gives mankind the astounding ability to send our bodies genetic recipes to produce proteins to fight, potentially, almost any disease.

It could be applied against respiratory diseases and bacterial infections, but also cancer, autoimmune conditions, and rare genetic disorders. Millions of lives could be saved each year.

Not long ago, this field was treated with much skepticism and had trouble attracting funding, but the success of the mRNA vaccines and a new openness from regulatory authorities has set off a gold rush. Drug firms now scramble to acquire qualified staff and laboratories and push into new territory.

Much remains to be solved, but animal trials are promising, and a large number of clinical trials are already under way, for everything from cancer treatments to vaccines against yellow fever, Zika, and HIV. As New Scientist writes, “it is no exaggeration to say that this could change everything.”

On other medical fronts we also witnessed welcome progress in 2021. We saw the approval of a groundbreaking malaria vaccine, and celebrated the first anniversary of an Africa free of wild polio.

A breakthrough that gives hope to sufferers from mental illness came when an American woman with severe depression was successfully treated with a brain implant. The 36-year-old patient said the tiny doses of electricity in her ventral striatum had returned her to “a life worth living.”

2021 was both tragedy and success story. At an individual level, many millions of people suffered the loss of a loved one, economic turmoil, and seemingly insurmountable personal challenges, not to mention intractable uncertainty about the future.

To say civilization has made enormous progress this year isn’t to trivialize the hardships experienced — after all, progress forward isn’t progress completed – but rather to say that the long-run outlook for civilization over the coming decade is better than it looks on the daily news.

We all have reasonable worries about the future. In 2022, we risk financial upheaval as colossal stimulus is withdrawn; the planet is still warming; our democratic institutions will face new threats; and the risk of war between major powers is real. No doubt, things will go wrong.

But history also teaches that most of the catastrophes we worry about never come to pass, since humanity has the capacity to learn and adapt. The great fear of the 1970s was that overpopulation, worldwide but especially in India, would result in apocalyptic famines and threaten the entire planet.

Paul Ehrlich introduced his 1968 bestseller The Population Bomb with a “hellish” visit to a stinking hot New Delhi full of “people, people, people, people.” In Ehrlich’s mind, India was so close to total collapse that it should not even receive food aid, which would do nothing but prolong the pain.

Yet on November 24, 2021, came an astonishing announcement from India’s government: India’s fertility rate had hit 2.0 children per woman, down from an average of six children sixty years ago.

In other words, the “hopeless” country, supposedly doomed by an exponentially growing population, now has a fertility rate near or below the replacement level. And it’s better fed than ever.

Over the last few decades, India has transformed its fate, increasing the average life expectancy in the country from 62 years to over 70, and GDP per person from $2,300 to $6,700. Despite the turmoil of the last two years, the median Indian is living a remarkably better life than their parents and grandparents.

Coronavirus
Stanford nasal study could lead to “morning after” virus spray
A “morning after” antiviral nasal spray could be created using new knowledge about how SARS-CoV-2 invades your nose.
Up Next 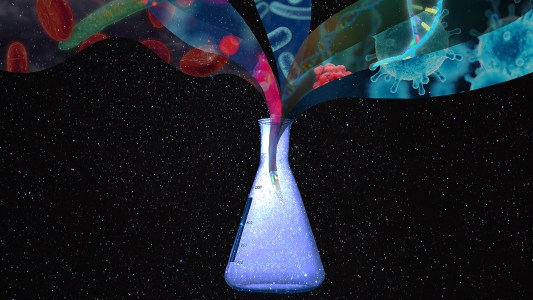