2021 was a big year for biotechnology breakthroughs. Most people have become familiar with advances in biotechnology because of COVID-19 vaccines, diagnostics, and treatments. Along with COVID-19 successes, scientists have made major strides in preventing and treating diseases.

Here are four of the top biotechnology breakthroughs of 2021.

A first for CRISPR therapy

In a first for the gene-editing technology, scientists infused a CRISPR therapy into the bloodstreams of patients to treat a genetic disease.

However, most applications of CRISPR have happened outside the body, where scientists remove cells from the patients with genetic blood disorders, correct the mutation in a lab, and then infuse the corrected cells back into the body.

But most genetic diseases affect organs and cells that can’t be easily removed and retransplanted, such as the lungs or liver. Fortunately, there’s another way to use CRISPR: injecting the technology so that it can make corrections directly to the affected organs. This has only been attempted once, in a small study where researchers delivered CRISPR treatment directly to an organ, the eye, in people with a genetic disorder causing blindness.

However, for the most part injecting CRISPR inside the body has been tough, because the technology has to find its way to the right organ, and it has to edit enough cells in the organ to correct the problem.

However, in August scientists announced results of a phase 1 clinical trial using CRISPR to treat transthyretin amyloidosis, in which toxic versions of a protein made by the liver build up in the heart or nerves. One high dose of the CRISPR treatment reduced levels of the harmful protein by 80% to 96% in three out of three participants.

These spectacular results indicate that not only did the treatment get to the liver, it must have successfully edited nearly every cell.

“This is a wonderful day for the future of gene-editing as a medicine,” Fyodor Urnov, a UC Berkeley professor of genetics, who wasn’t involved in the trial, told NPR. “We as a species are watching this remarkable new show called: our gene-edited future.”

A malaria vaccine decades in the making

Malaria is the third most deadly disease for children under five, and finally, after decades of research, the World Health Organization has recommended the first malaria vaccine, called RTS,S. It’s a breakthrough in more ways than one — not only could it prevent thousands of severe malaria illnesses and deaths, but it is also the first vaccine for a parasitic disease.

In children under 5, the vaccine, brand name Mosquirix, was about 30% effective at reducing severe malaria infections, but in another study, it reduced deaths by 73% for vaccinated children who also took preventive malaria medications, compared to kids who only took preventative meds.

The vaccine targets the malaria parasite Plasmodium falciparum. It  contains a synthetic piece of the parasite, a protein that provokes antibody production against the parasite and helps promote an inflammatory response.

“With the devastation of COVID-19, and with progress stalled on malaria control, and news of resistance to anti-malaria drugs, it’s uplifting to see some positive news,” James Tibenderana, Ugandan epidemiologist from the Malaria Consortium in London, told Nature.

A more effective vaccine may be on the horizon, too. A phase 2 trial showed the vaccine, developed in a collaboration between Oxford, Novavax, and India’s Serum Institute, was 77% effective at preventing malaria in children. The results were published in The Lancet in May 2021.

If the vaccine does end up getting approved, it could be a gamechanger for children under 5, who account for more than half of the 627,000 malaria deaths each year.

Until recently, there haven’t been effective treatments people could take at home for COVID-19. New antiviral pills are poised to change that, potentially stopping the disease before it becomes severe.

But that information came from company press releases, and the final results from Merck’s study showed their pill only cut the risk of hospitalization by 30%, since people treated in the second half of the study showed little benefit. Pfizer says its final analysis and a second study confirm its original results.

The two pills work quite differently, too. Molnupiravir introduces a molecule to the SARS-CoV-2 virus which gets taken up into the virus’s genome, causing genetic mutations that eventually kill the virus. Paxlovid blocks a viral enzyme that the virus needs to reproduce.

But there are some concerns — molnupiravir could theoretically introduce mutations into RNA or DNA, and the FDA has already ruled out authorizing the drug for pregnant women. The concerns for Pfizer’s pill are smaller, but people taking certain medications might not be able to take Paxlovid, due to drug interactions.

But the antiviral pills can be produced cheaply and could help control the pandemic where vaccination rates remain low or when variants begin to evade the immune system. “For large parts of the world that have not got good vaccine coverage, this is really a godsend,” Charles Gore, executive director of the Medicines Patent Pool, told Nature.

The AIDS pandemic has been ongoing for 40 years and scientists have yet to develop an effective vaccine for the virus, HIV, that causes it. But that might change thanks to breakthroughs in the COVID-19 pandemic.

An HIV vaccine has eluded scientists because the virus evolves rapidly and has an outer layer covered in sugars, obscuring it from antibodies.

To create an HIV vaccine, “it’s likely that one could build on some of the tools and platforms used for COVID-19 vaccines, including messenger RNA,” wrote Anthony Fauci, director of the National Institute of Allergy and Infectious Disease, in Nature.

The COVID-19 vaccines present cells with mRNA encoding pieces of the telltale spike protein on SARS-CoV-2. Cells produce the protein, which serves as a molecular wanted poster. HIV has a similar spike protein. An mRNA vaccine targeting part of the HIV spike that tends to stay the same across different strains could spur the immune system to produce broadly neutralizing antibodies that recognize different HIV strains.

In November, Moderna, maker of the second COVID-19 mRNA vaccine, began a phase 1 clinical trial testing an mRNA HIV vaccine in 56 participants. They expect to complete the study in 2023. 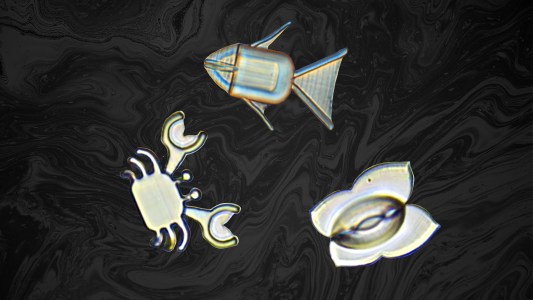 Shape-shifting, magnetic microbots could become assassins for cancer — destroying tumors without the usual collateral damage on the rest of the body.

Healthcare
Microbots in your blood could help destroy cancer
By Amanda Winkler
Subscribe to Freethink for more great stories
Subscription Center
Sections
Video
Freethink
Subscribe
We focus on solutions: the smartest people, the biggest ideas, and the most ground breaking technology shaping our future.
Subscribe