For the first time, researchers appear to have effectively treated a genetic disorder by directly injecting a CRISPR therapy into patients’ bloodstreams — overcoming one of the biggest hurdles to curing diseases with the gene editing technology.

The therapy appears to be astonishingly effective, editing nearly every cell in the liver to stop a disease-causing mutation.

The challenge: CRISPR gives us the ability to correct genetic mutations, and given that such mutations are responsible for more than 6,000 human diseases, the tech has the potential to dramatically improve human health.

One way to use CRISPR to treat diseases is to remove affected cells from a patient, edit out the mutation in the lab, and place the cells back in the body to replicate — that’s how one team functionally cured people with the blood disorder sickle cell anemia, editing and then infusing bone marrow cells.

Bone marrow is a special case, though, and many mutations cause disease in organs that are harder to fix.

Another option is to insert the CRISPR system itself into the body so that it can make edits directly in the affected organs (that’s only been attempted once, in an ongoing study in which people had a CRISPR therapy injected into their eyes to treat a rare vision disorder).

Injecting a CRISPR therapy right into the bloodstream has been a problem, though, because the therapy has to find the right cells to edit. An inherited mutation will be in the DNA of every cell of your body, but if it only causes disease in the liver, you don’t want your therapy being used up in the pancreas or kidneys.

A new CRISPR therapy: Now, researchers from Intellia Therapeutics and Regeneron Pharmaceuticals have demonstrated for the first time that a CRISPR therapy delivered into the bloodstream can travel to desired tissues to make edits.

We can overcome one of the biggest challenges with applying CRISPR clinically.

“This is a major milestone for patients,” Jennifer Doudna, co-developer of CRISPR, who wasn’t involved in the trial, told NPR.

“While these are early data, they show us that we can overcome one of the biggest challenges with applying CRISPR clinically so far, which is being able to deliver it systemically and get it to the right place,” she continued.

What they did: During a phase 1 clinical trial, Intellia researchers injected a CRISPR therapy dubbed NTLA-2001 into the bloodstreams of six people with a rare, potentially fatal genetic disorder called transthyretin amyloidosis.

The livers of people with transthyretin amyloidosis produce a destructive protein, and the CRISPR therapy was designed to target the gene that makes the protein and halt its production. After just one injection of NTLA-2001, the three patients given a higher dose saw their levels of the protein drop by 80% to 96%.

A better option: The CRISPR therapy produced only mild adverse effects and did lower the protein levels, but we don’t know yet if the effect will be permanent. It’ll also be a few months before we know if the therapy can alleviate the symptoms of transthyretin amyloidosis.

This is a wonderful day for the future of gene-editing as a medicine.

If everything goes as hoped, though, NTLA-2001 could one day offer a better treatment option for transthyretin amyloidosis than a currently approved medication, patisiran, which only reduces toxic protein levels by 81% and must be injected regularly.

Looking ahead: Even more exciting than NTLA-2001’s potential impact on transthyretin amyloidosis, though, is the knowledge that we may be able to use CRISPR injections to treat other genetic disorders that are difficult to target directly, such as heart or brain diseases.

“This is a wonderful day for the future of gene-editing as a medicine,” Fyodor Urnov, a UC Berkeley professor of genetics, who wasn’t involved in the trial, told NPR. “We as a species are watching this remarkable new show called: our gene-edited future.” 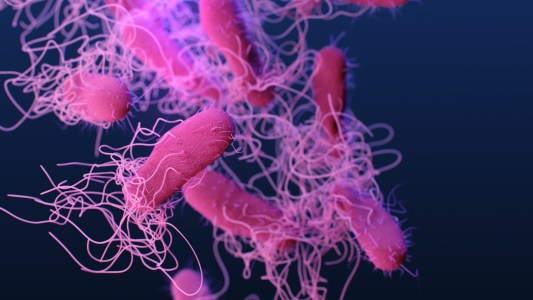 Researchers have developed a device that can test for infections in under an hour, no lab needed.

Medicine
Diagnosing infections without the lab — or wait
Subscribe to Freethink for more great stories
Subscription Center
Challenges
Video
Freethink
Subscribe
We focus on solutions: the smartest people, the biggest ideas, and the most ground breaking technology shaping our future.
Subscribe