Many of us are warned in childhood that we shouldn’t talk to strangers.

But what if — despite the good intentions behind that warning — this advice has unintentional consequences that aren’t in our best interest? What if our suspicion of strangers is rooted in a misunderstanding of our own nature and evolution?

This is the argument Joe Keohane makes in his just-released book, The Power of Strangers: The Benefits of Connecting in a Suspicious World.

What if our suspicion of strangers is rooted in a misunderstanding of our own nature and evolution?

In the latest episode of Build for Tomorrow, Jason Feifer speaks to Keohane to get a clearer sense of why talking to strangers can actually be quite beneficial to us.

The surprising history of strangers

In contemporary society, there’s a common conception that for the majority of human history, our default mode has been to treat strangers with skepticism at best — and violence at worst.

“When people say we’re so tribal and they always lament how tribal we are, it always means that we believe that for most of our time on earth, it’s been small groups of similar people sitting around,” Keohane says. “And once someone else turned up, they attacked that person.”

It’s not an unreasonable belief — it optimizes for safety. But taken to its logical conclusion, there’s a bit of a paradox at play.

“If our default is to kill everybody we don’t know, how did we ever end up living the way we live?” Keohane says.

To answer that question, Keohane spent years researching The Power of Strangers. What he discovered is that all of our modern conditioning about strangers is probably wrong.

A brief evolutionary history of strangers

Many evolutionary biologists believe, according to Keohane, that the ability to talk to and cooperate with strangers is a “cornerstone of human civilization.” Interacting with strangers radically reshaped the trajectory of our species — allowing us to coordinate with larger groups in ways that other animals could not.

“Our earliest ancestors may have lived in small groups, but once we learned to cooperate with other groups we didn’t know, it opened the way for the modern world as we know it,” Feifer says.

Researchers believe that connecting with strangers was in fact so evolutionarily advantageous to the development of our species, that our biology began to evolve to better facilitate it. One such example is the cooperative eye hypothesis, which holds that we evolved to have more visible whites in our eyes to promote cooperation.

“Once we learned to cooperate with other groups we didn’t know, it opened the way for the modern world as we know it.”

“We developed the whites of our eyes, which is something that wolves don’t have or chimpanzees don’t have,” Keohane says. “And it’s useful because it telegraphs what we’re going to do.”

This feedback loop — wherein a behavior (like cooperating with strangers) is so beneficial it induces changes in our biology — is known among evolutionary biologists as gene-culture coevolution.

So why is talking to strangers so uncomfortable?

If talking to strangers is so important to our evolution, why does it feel so uncomfortable in practice? One reason is that we’re simply, well, out of practice.

We’re out of practice for a pretty straightforward reason: there are far fewer occasions in modern life where speaking to strangers impacts our survival.

“Given the conveniences of our modern lives, we could go weeks or months without having a meaningful interaction with a stranger,” Feifer says. “And interacting with strangers takes a lot of work! I mean, you’re reading them on all levels, you’re communicating a lot about yourself. It’s exhausting. And if we don’t have to do it, we often don’t.”

In the absence of a clear need, the incentive structure doesn’t really work; it translates to discomfort and uncertainty for no clear benefit.

“There are a lot of things that conspire against us making these sorts of connections, but the capacity is there,” Keohane said. “Once you start trying, you will find that it’s incredibly natural in a way that you absolutely did not expect.”

“Everybody seems to believe that if you just go and chat with someone, they’re going to reject you … What people need to understand is that it’s largely baseless.”

The other primary reason Keohane believes we’ve lost touch with how to interact with strangers is bad PR. From advice like “Don’t talk to strangers” in our younger years to news stories that foreground division and strife in adulthood, we are bombarded with implicit and explicit messaging that says strangers = danger. This comes at a cost.

“You lose contacts, you lose potential business contacts, you lose access to different perspectives, you lose access to the marketplace to a certain degree if you’re not talking to people who are different than you are,” Keohane says. “When you interact with lots and lots and lots of people, you have a much more accurate idea of what the world is and what people are like and what motivates them.”

Importantly, the lack of socializing with strangers also makes us more prone to stereotyping other people and discriminating against them.

“When you have contact, meaningful contact with people from other groups, it’s very difficult to say that that group is all one thing, and that one thing is bad,” Keohane says.

“I spent a week with a group that teaches Republicans and Democrats how to speak to each other, that gets into a lot of how you can humanize one another and sit down on a table and have a conversation, and then look into what happens after people have those conversations, which is like, they’re amazed, they’re relieved. They can’t believe that this is a person. These aren’t supposed to be people.”

How to connect with strangers today

Even with these benefits in mind, it’s still hard to imagine going out of your way to spark up a chat with a stranger.

“Everybody seems to believe that if you just go and chat with someone, they’re going to reject you,” Keohane says. “They’re going to think there’s something wrong with you…[that] you’re after something. What people need to understand is that it’s largely baseless.”

In conducting research for his book, Keohane had to walk the walk; he had to consistently talk to strangers — he boils it down to  three techniques he used to strike up a conversation with a stranger.

The first is to acknowledge that you’re breaking the rules.

“You could say something like, ‘Hey, I know we’re not supposed to be talking to people on the subway, but,’ and now you’ve demonstrated that you are not wrong in the head because you are aware of the situation,” Feifer says.

Once you’ve established your awareness of the unusual behavior, then it’s time to make a statement that explains a bit about why you’re talking to them specifically.

“You could say, ‘I really like your shoes,’” Feifer says. “You have to give them a justification for why you are talking to them. You could say, like, ‘My shoes are worn down and I’ve been looking for a new pair.’ The justification is important because it addresses their suspicion. They’re wondering if you have an agenda, and now they know what it is, and it’s not such a bad agenda. The door is now open to conversation.”

The next strategy? Lean in to breaking the script.

“If someone asks how you’re doing, don’t say fine. Say, ‘I’m a 7.5 out of 10,’” Feifer says. “And then explain why you’re a 7.5, and then ask the person how they’re doing. When you do this, Joe says the craziest thing will happen. The other person will mirror you. It’s what we do.”

The final strategy is to ask open-ended questions. It communicates that you’re interested in chatting, but not fishing for a specific piece of information. Because of the nature of this type of conversation, close listening is vital for helping other people feel heard, and thereby encouraging them to communicate their ideas clearly.

“As a verbal species, we’re not particularly good at clearly articulating our feelings,” Feifer says. “[An open-ended question] puts me in a space where I can really think about it. I can think about my answer, because I don’t feel like I’m being attacked, I don’t feel like I’m being grilled. I can sit there with this person who seems to be interested in me and who poses no real threat that I can tell, and I can think through what I’m saying and I can think out loud.”

So the next time you’re on a train, plane, or automobile, it might be worth turning to the stranger next to you and engaging in one of the most important behaviors in the history of our species.

Psychology
The missing apex of Maslow’s hierarchy could save us all
In his later years, psychologist Abraham Maslow added a new apex to the pyramid of human needs: self-transcendence.
By Robby Berman 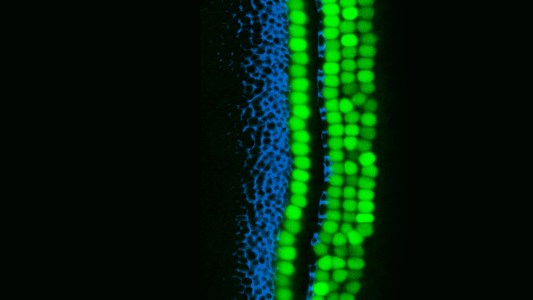 A new mouse study suggests we may be able to reverse permanent hearing loss in humans by tapping into a latent regenerative ability.

Genetics
Permanent hearing loss may be reversible
By Kristin Houser
Subscribe to Freethink for more great stories
Subscription Center
Sections
Video
Freethink
Subscribe
We focus on solutions: the smartest people, the biggest ideas, and the most ground breaking technology shaping our future.
Subscribe