A new opera at London’s Royal Opera House promises to immerse audiences in a “hyper-reality” made possible by virtual reality tech.

The details: The opera is called “Current, Rising,” and it’s being billed as the world’s first VR opera. It opens at the Linbury Theatre on May 20 and runs until June 9.

The opera is a 15-minute-long experience with showings scheduled throughout the day for up to four people at a time. Attendees choose their time slot when buying tickets, which cost between $20 and $30.

Just prior to show time, they’ll don headphones and a VR headset connected to a computer they’ll carry with them in a backpack. Once the opera begins and they enter the VR world, they’ll be able to see the avatars of the other three people in their group

What to expect: Traditional operas tend to feature characters who lead viewers on a narrative journey, but that doesn’t seem to be the case with the VR opera.

Instead, attendees will be “traversing together the landscapes of the night, from twilight to dawn, exploring ideas of isolation, connection, and collective reimagination,” according to a press release.

That sounds like a fittingly enigmatic subject matter for an opera with an experimental format, but if you need something a bit more concrete to latch onto, “Current, Rising” was inspired by the liberation of the character of Ariel in Shakespeare’s “The Tempest.”

The big picture: “Current, Rising” isn’t likely to upend the world of opera as we know it — the medium has been around for centuries, and many traditionalists will no doubt prefer the standard format to VR.

Still, it could mark the beginning of a new branch in opera’s evolutionary tree, and director Netia Jones told the Guardian she’s already developing the VR opera’s follow up.

“This isn’t the future of opera,” Jones said, “but it could be one of its futures.”

Urban Living
New “risky” playground could make kids anti-fragile
A new playground in Melbourne’s Southbank is the work of artist Mike Hewson, who introduces “risk” back into play.
By Sanné Mestrom
Up Next 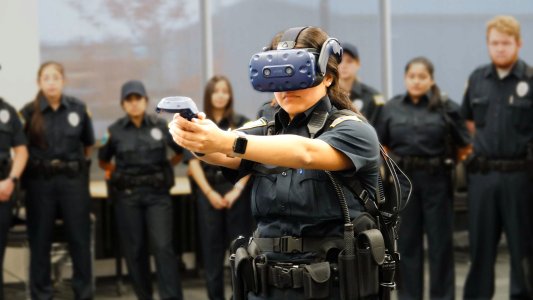 Fixing Justice
Controversial police killings are being recreated in VR
By Kristin Houser
Subscribe to Freethink for more great stories
Subscription Center
Sections
Video
Freethink
Subscribe
We focus on solutions: the smartest people, the biggest ideas, and the most ground breaking technology shaping our future.
Subscribe