During the latest episode of Eric Weinstein‘s podcast, The Portal, an audience member asks German filmmaker Werner Herzog to recommend one or two books that this generation needs to read. His response is brilliant:

“I would not want to give you two books because you would sit down and read them and think that you’ve done it. You should not read two books, but 2,000 books.”

This isn’t the first time that Herzog has offered such advice. An outspoken advocate for reading, in 2014 he really drove the point home:

It’s not that Herzog doesn’t prefer certain books over others. In fact, he created a reading list containing six books — three required, three suggested — for his film school. During his chat with Weinstein, he offered two of these classics, along with sagely advice to “read the Russians; read the Germans.”

After mentioning two of those six titles during The Portal, Herzog makes it clear that they alone will not transform the reader. It’s not what you read but reading itself that truly matters.

Below are Herzog’s six books from his film school.

Virgil’s second major work, written around 29 BCE, is a lengthy group of poems about agriculture. More importantly, the collection is focused on the growth of man and society. Agriculture, it must be remembered, was not always factory farms churning out supermarket aisle produce and livestock. The struggle for existence depends on sustenance; politics grew out of the control of food. It’s impossible to rule a population if you are not controlling the supply chain. Virgil pays homage to deities and vines while exploring the role of labor and man’s existential struggle against a hostile and unforgiving nature.

During The Portal, Herzog mentions Ernest Hemingway, though he does not cite a title. This masterful short story from 1936 eventually found its way onto the silver screen as “The Macomber Affair” eleven years later. The coming of age story harkens back to a time when men had to hunt for pride and privilege. Thanks to Hemingway’s acute sense of social mores, this tale occurs during an African safari. A lion and a married woman become trophies for the protagonist. Whiskey appears — this is Hemingway, after all — as well as buffalo, the spirit animal that sets up the real struggle of this tale: men in conflict with other men. Death naturally ensues. It’s also available for free here.

The one required book Herzog mentions is this timeless tale centered on falcon-watching during a time when they were almost extinct. J.A. Baker provides “prose we have not seen since Joseph Conrad.” It is the one book Herzog requires of any filmmaker. Baker writes with unmatched precision about a small segment of the natural world with a passion rarely witnessed in literature. (Robert McFarlane, who writes the introduction to the most recent reprinting of Baker’s book, also dedicates an entire chapter of his book, Landmarks, to The Peregrine.) Herzog claims that creators and thinkers of any discipline—music, computers, mathematics—will be taken by Baker’s “very deep, relentless passion for what you are doing.”

If you’re a fan of Herzog’s films, you’ll know he finds inspiration in places that few dare to look. Thus, the 888-page report on the assassination of JFK commissioned by President Lyndon Johnson in 1963. This report remains controversial in the minds of those who swear neither Lee Harvey Oswald or Jack Ruby acted alone. You can read it for free via this link above, but as with The Mueller Report, buying a physical copy will certainly be easier on your eyes.

The Greeks and Romans get the lion’s share of credit when it comes to mythology. Indian myths follow in global popularity, but you don’t have to watch “Vikings” to know that Norse mythology is as epic as they come. This collection of minstrel poems has influenced everyone from Tolkien to Pound to Borges, detailing the trials, tribulations, and battles of Scandinavia’s greatest warriors.

Bernal Diaz del Castillo was a “footman of Cortes,” according to Herzog. The conquistador served on three Mexican expeditions for his native Spain, taking copious notes along the way, which resulted in this 1576 book (which you can read free here). Castillo wrote this travel tale when he was 84 years old, near the end of his life. Herzog says that Castillo writes an incredibly rich story that details the heart of men. The adventurous work is summated by its author in one simple and timeless sentiment: “We went there to serve God, and also to get rich.” 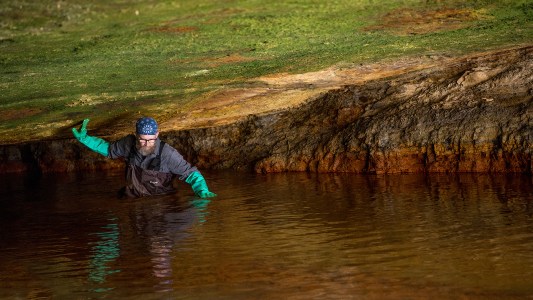 Acid mine drainage turns thousands of creeks orange in Appalachia. True Pigments is pulling that pollution to create paint pigments.