Is a giant sail part of our clean energy future?

In ​​December 2021, German startup SkySails Power deployed a massive sail over the island of Mauritius, east of Madagascar. Software autonomously controls the sail’s flight pattern. As it soars higher, it unwinds a tether connected to a winch on the ground — and that drives a generator to produce electricity.

When the sail runs out of tether — about 400 meters up — the software uses a small amount of the generated electricity to reel it back down to about 200 meters, and the cycle starts over.

This process creates enough electricity for 50 of the island’s homes. That’s not much, but the Mauritius sail is the first fully autonomous commercial “airborne wind energy” system to be deployed — and it demonstrates some of the potential of this alternative to traditional wind power.

The problem with wind

Typical wind power relies on installing giant wind turbines in locations where it blows hard and consistently. The wind spins the turbines’ blades, and generators convert that mechanical energy into electricity — all without burning any fuel or producing any carbon emissions.

Wind is currently the fourth largest source of electricity in the US and one of the fastest growing — in 2011, it generated just 2.9% of the nation’s total electricity, but by 2021, it was up to 9.2%. Solar, for comparison, provided just 2.8% of our electricity in 2021.

One of the biggest limitations to expanding our wind power capacity is the amount of land it requires — a wind farm needs at least 10 times the space as a coal or natural gas power plant to generate the same amount of electricity.

To meet our climate goals, the US will need a lot more wind power, but we can’t just stick turbines anywhere.

On land, the systems work best in large open fields at high elevations — some areas simply don’t have any suitable locations nearby, and the cost of transporting electricity from far away can be prohibitive.

In other instances, people living near the sites of potential wind farms protest their construction due to the expected noise, impact on wildlife, or appearance of the turbines — the average turbine is about as tall as the Statue of Liberty and can be seen from a great distance.

Wind also blows quickly and steadily over water, so placing turbines offshore is another option — but it has drawbacks, too.

Most offshore turbines are fixed to the seafloor, which limits them to shallow waters. They’re also more expensive to build — and harder to maintain — than onshore turbines and draw the same criticisms for impacting wildlife and being eyesores.

Dozens of startups are developing flying wind turbines, like the sail soaring over Mauritius, that could supplement our terrestrial systems.

These airborne wind turbines can be deployed in places where traditional wind farms aren’t possible, such as mountainous areas or the deep sea. They can capture the wind hundreds of meters up, where it blows faster than the heights reached by even the tallest ground turbines.

While SkySails is deploying sail-based airborne wind turbines, other companies are developing systems with rigid wings or drones at the end of the tethers. Some of these have onboard generators that send electricity down the tether rather than producing it on the ground.

Whatever the design, proponents say airborne wind turbines are easier to deploy and cheaper to manufacture and transport than their ground-based counterparts — but the systems have big shortcomings.

A major one is that, since they’re in the air, the turbines need to meet not only land regulations but also airspace regulations, but because these systems are new, those rules don’t yet exist.

“It’s chicken and egg,” Lorenzo Fagiano, an engineer and member of the board of the industry association Airborne Wind Europe, told Yale Environment. “So long as there aren’t technologies, they don’t make regulations. Without regulations, it’s hard for companies to raise money.”

People living near airborne turbines might complain that they’re destroying the view of the sky, and the systems could pose a threat to wildlife — the tethers move fast and could potentially hurt birds that don’t see them until it’s too late to avoid a collision.

Before they can be deployed, the systems have to prove safe to those on the ground, too. One turbine developed by Makani — a shuttered startup once owned by Alphabet — crashed into the sea during a test flight. If the crash had happened over land, someone might have been hurt.

All of these potential drawbacks are compounded by the fact that we’d need to deploy fleets of airborne wind turbines — not just single systems — to generate any significant amount of electricity. And to avoid getting their tethers tangled, the sails or drones may need to be spaced far apart, which could make them even more sprawling than traditional wind farms.

After decades of theoretical exploration, airborne wind energy is finally being developed to see if it is capable of meeting our electricity needs on a small scale — and the US government is starting to take notice.

In 2021, a report by the National Renewable Energy Laboratory concluded that airborne wind energy “could provide a significant contribution to the U.S. renewable energy supply” and suggested the nation consider a 10-year research plan into the tech.

If the technology can continue to scale up — and overcome regulatory, environmental, safety, and social challenges — we could be headed toward a future in which the horizon is dotted by tethered sails and drones, each harvesting the clean energy of the wind, high above the ground. 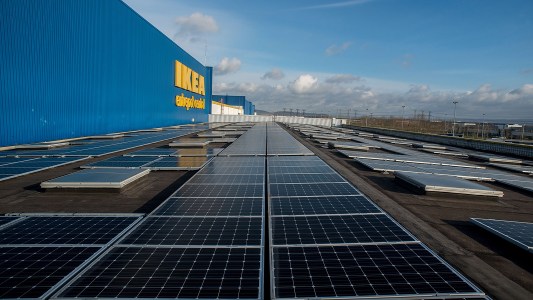