It seems many people leave behind more than just sandcastles when they go home after a trip to the beach. Beach litter is a recurring issue, and it is damaging our coastal environments and wildlife.

And there is one small item that is causing a big problem: cigarette butts. They may only be a few centimetres long, but they are full of microplastics and toxic chemicals that harm the marine environment. They don’t easily decompose, and when they come into contact with the water, harmful substances can leach out.

Unfortunately, they are also the most common type of litter, with an estimated 4.5 trillion discarded annually.

On the hunt for trash

Using an artificially intelligent robot, two Dutch entrepreneurs are helping clean up some of the problem. The BeachBot is a specially designed machine that can identify and remove small items of litter from beaches. It uses image recognition to find butts in the sand and picks them up.

An accompanying app is also helping the robot get smarter. When it can’t identify litter with certainty, the robot takes a picture which the public can then identify, helping it learn for the future. The public can also help train the bot by supplying their own images of trash.

In this way, the BeachBot is also helping collect data and improve our understanding of the problem.

The bot has already been in action on a number of beaches in Holland, helping with clean-up projects.

And the designers are now working on a new project – the MAPP detection robot. These robots are designed to work in outdoor spaces like parks and beaches, mapping and collecting litter data. They are able to communicate with one another to collaboratively hunt for trash.

Marine litter harms wildlife, which can become entangled in it or ingest it, causing injury, drowning or suffocation. It is also a problem for coastal communities which rely on clean beaches for tourism, fishing and recreation.

As well as trash being left behind by beach visitors, beach pollution is also caused by plastics and other non-biodegradable waste being discarded into rivers and streams, eventually making its way to the ocean.

Most of the litter found on beaches is plastic, making up nearly 90% of all waste on some beaches, according to OSPAR, which monitors litter on beaches in the north-east Atlantic.

This plastic takes years to degrade, with researchers estimating that 8 million tonnes of it ends up in our ocean each year. 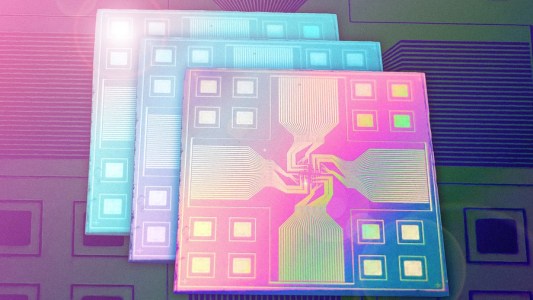 Engineers have created an AI chip with alternating layers of sensing and processing elements that can communicate with each other.