Researchers have discovered genes linked to plant survival in Chile’s Atacama Desert, one of the world’s harshest desert environments.

Understanding how desert plants adapt to such extreme conditions could allow us to breed varieties of plants that can survive a changing climate.

What they did: Despite being one of the world’s driest locations, the Atacama Desert in northern Chile is home to dozens of species, including grasses, shrubs, and perennials. But these plants don’t have it easy. They have to find creative ways to deal with the severe dryness, soil void of nutrients, and strong solar radiation, and high altitude. So they tend to be small prickly plants with deep roots.

To find out how they survive where their non-desert relatives would die, the Chilean research team constantly monitored  22 sites in the desert. For 10 years, they observed and cataloged the environment.

It is harsher than we can imagine. It barely rains in the Atacama Desert. The soil is void of nutrients. The temperature can fluctuate 50 degrees from day to night.

It is harsher than we can imagine. Like most desert environments, it barely rains there. But rain is so rare that sometimes it only occurs a few days each year. The soil is void of nutrients. The temperature can fluctuate 50 degrees from day to night. And the sun! The sun beats down on the desert, drying and baking everything to a crisp.

The scientists collected dozens of plant and animal samples, preserved in liquid nitrogen to get them back to their lab intact.

Back in the lab, they sequenced the genes expressed in Atacama’s 32 major plant species — and the microorganisms associated with the plants. They discovered that certain plant species fostered growth-promoting bacteria near their roots. This strategy is an adaptation that allows the plants to maximize their nitrogen intake — a nutrient essential for plant growth, which is hard to come by in the sterile Atacama soil, reports Futurity.

Then they compared the genomes of the Atacama plants with 32 other similar plants — looking deep into their evolutionary history to see how the plants adapted to the desert environment.

They found 265 candidate genes whose sequences evolved and adapted over time. Adaptive mutations in these genes could be critical to the plant’s survival in the desert environment and harsh conditions. Some of the genes the team homed in on include those that regulate light response, photosynthesis, salt, and stress response — all critical for survival.

“In an era of accelerated climate change, it is critical to uncover the genetic basis to improve crop production and resilience under dry and nutrient-poor conditions.”

Survival mode: Scientists are interested in plants and animals that can survive the harshest conditions for various reasons. Some are looking for hearty traits that allow unique species to survive in unusual conditions we could see more of in the future.

A French aquaculturist wants to find fish that can grow in space and on the moon to feed humans traveling or living off-world. University of California researchers are trying to understand why certain corals can thrive in acidic water, a growing threat to reefs, thanks to rising levels of CO2 in the air and sea.

Like the plants of the Atacama desert, if we can crack their code, then maybe we can help species survive climate change or migrate to new environments — even the moon! But the Atacama discoveries offer very concrete benefits for human agriculture in the immediate future.

“In an era of accelerated climate change, it is critical to uncover the genetic basis to improve crop production and resilience under dry and nutrient-poor conditions,” Gloria Coruzzi, New York University (NYU) biologist and co-led on the study, said in a statement.

“Our study of plants in the Atacama Desert is directly relevant to regions around the world that are becoming increasingly arid, with factors such as drought, extreme temperatures, and salt in water and soil posing a significant threat to global food production,” co-author Rodrigo Gutiérrez, added.

These genes could be bred or edited into existing crops, and the discovery of their relationship with symbiotic microbes may point to innovative ways to help plants thrive by cultivating their own soil. 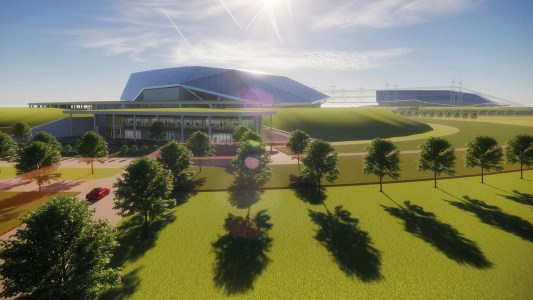 The U.K is giving Rolls-Royce nearly $300 million to develop small modular reactors (SMRs) to increase its supply of clean energy.

Clean Energy
Are mini reactors the future of clean energy?
Subscribe to Freethink for more great stories
Subscription Center
Sections
Video
Freethink
Subscribe
We focus on solutions: the smartest people, the biggest ideas, and the most ground breaking technology shaping our future.
Subscribe